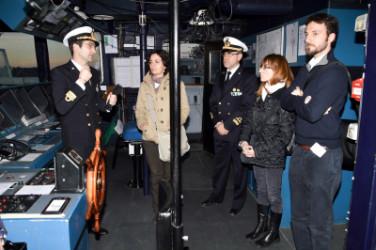 In Sicily for a research project on migratory flows in the Mediterranean and on search and rescue events (SAR - search and rescue), a delegation from Amnesty International, the independent world non-governmental organization that acts worldwide to defend rights human, February 25 visited the Cigala Fulgosi Navy patrol boat.

The three researchers (Elisa De Pieri, Matteo De Bellis and Anneliese Baldaccini) were received at the Augusta naval base, by the commander of the patrol forces for surveillance and coastal defense (Comforpat), rear-admiral Mario Culcasi, to attend a presentation on the Mare Nostrum humanitarian operation and continue with a visit on board the Navy patrol boat, where the commander of the Cigala Fulgosi, frigate captain Riccardo Del Bianco, assisted by some crew members, explained the equipment and onboard arrangements used during migrant relief activities.

The commander then described in detail the actions that the women and men of the crew perform during the delicate search and rescue operations to safeguard life at sea; operations that were taking place at that very moment off Lampedusa, where the San Giusto and Grecale ships were rescuing over 800 migrants.

On Friday 27 January, the visit of the Undersecretary of State for Defense Dr. Matteo Perego of Cremnago took place...
670
Read

After a sleep that lasted about half a million years, a paleontological find has come to light among the soil...
2926
Read

The offshore patrol vessel Commander Foscari, after having cast off the moorings from the Augusta Naval Base the days ...
574
Read

The Director of Naval Armaments (Navarm) of the General Secretariat of Defense and National Directorate of ...
4652
Read

After a night of voting in the House Budget Committee, an amendment was approved to the proposed...
4430
Read

With the end of the PIA - Pooling Implementing Arrangement - signed in 2018 by the Defense and the US Marine Corps and the...
13171
Read