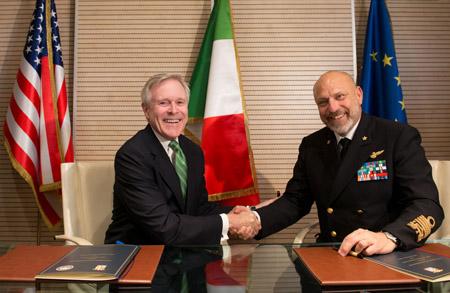 On a historic day, the top representatives of the two armed forces, Admiral Giuseppe De Giorgi and Secretary Ray Mabus, signed an agreement at the ENI Biorefinery in Porto Marghera, aimed at the interoperability of new generation fuels for ships and aircraft.

An agreement that comes to life from the experiments carried out by the two marinas on biodegraded 50 mixtures.

First steps towards the identification of an alternative product to the fossil fuel in use. The Italian Navy is the first in Europe to have experimentally experienced the green diesel, thanks to the collaboration with Eni, the Foscari offshore patrol boat and the 2014 will continue involving several naval units with engines of different characteristics, thus giving life to the Fleet project Green.

"The new ships - said De Giorgi - will be mixed propulsion between traditional fuel and biodiesel with the possibility of navigating also with natural gas, reducing costs and pollution. The new ships will also be studied for civil protection because the energy advantages that will come introduced will be used to give light to small coastal towns in difficulty, to give them drinking water and logistical assistance ".

The Venetian biorefinery, the world's first example of a converted oil refinery to produce biofuels from vegetable oils, including the second and third generation, is the background to the “pact”. 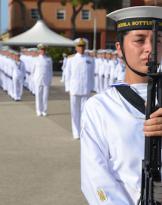 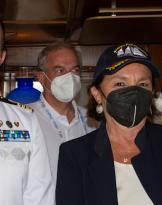 After the stop at anchor in the waters facing the city of Procida, as part of the "Procida Capital ...
215
Read

Yesterday, 25 June 2022, the Luigi Rizzo frigate returned to La Spezia at the end of its operational commitment in the ...
541
Read

On June 17, 2022, the salutation of the brigade took place at the forecourt of the E. Carlotto barracks in Brindisi ...
586
Read

On the evening of Tuesday 7 June, the Palinuro School ship set sail from the Military Arsenal of La Spezia to give ...
427
Read