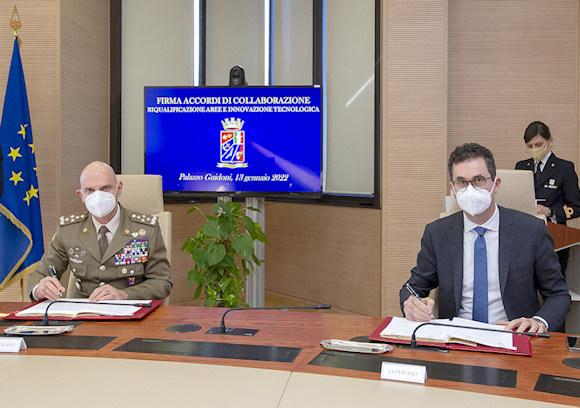 Il General Secretariat of Defense e National Directorate of Armaments, Segredifesa, has finalized two collaboration agreements with the University of Naples "Federico II" and the Polytechnic of Bari.

For the Ministry of Defense, the Army Corps General Luciano Portolano, Secretary General of Defense and National Director of Armaments signed, while the two universities were represented by the magnificent rectors, Professor Matteo Lorito, for the "Federico II" and by Professor Francesco Cupertino, for the Polytechnic.

The agreements were signed at Palazzo Guidoni, headquarters of Segredifesa, and have the aim of identifying virtuous paths of research and development on the themes of technological innovation and on those of the redevelopment of military areas (both those used by the Defense and of those abandoned or in the process of being disposed of because they are no longer useful for institutional purposes), with particular interest and reference to urban planning, environmental and energy saving aspects.

The agreements represent an example of synergy between institutions, which systematize their resources to promote and develop jointly, through shared initiatives and projects of research, innovation and training instrumental to pursue the objective of cooperation in scientific research and teaching in areas mentioned above, aimed at spreading, among other things, the "culture of research". 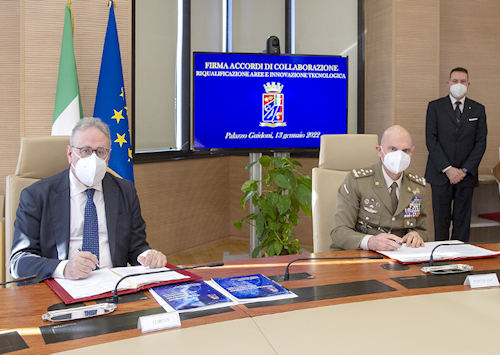 The partnerships launched today represent a further step forward in the creation of a scientific network spread throughout the national territory, which already includes other Italian universities, such as the Politecnico di Torino, the Politecnico di Milano, the Free University of Bolzano, the University of Palermo and the University of Cagliari, which in addition to representing an interesting opportunity for discussion between the institutions, also wants to provide an important and concrete contribution to the development of the country system.

The implementation and management of all the activities deriving from the agreements will be handled by an ad hoc scientific committee, which will be responsible for defining the strategic objectives of the partnership and providing the specific guidelines for each project line.

On the proposal of the Minister of Defense, the Honorable Lorenzo Guerini, the President of the Republic, with Presidential Decree of 17 ...
5037
Read

The commander of the Northern Operational Forces, general Salvatore Camporeale, accompanied by the commander ...
1567
Read

In recent days, the first meeting in presence took place in the city of Cassino, after the period of restrictions ...
397
Read

"It is necessary to urgently evacuate all compatriots currently present in the territory and it must be done in the way ...
2182
Read

The cross-border rescue exercise ended in the late afternoon today, at the Parco Giona area ...
1425
Read

The Deputy Chief of the Defense Staff, general of the army corps Carmine Masiello, delegated by the head of state ...
515
Read

A delegation from the General Secretariat of Defense, led by Major General Rodolfo Sganga, head of the III ...
302
Read

"Having assumed the leadership of the NATO Joint Force Command in Brunssum today is confirmation of the excellence of the Armed Forces ...
706
Read