Home News armed forces Interagency Naming of the meeting rooms of the secret ... 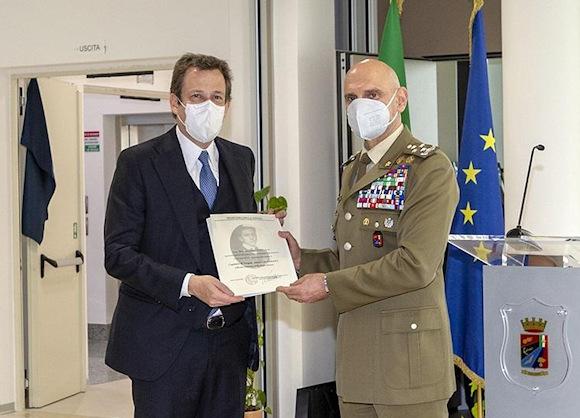 An exciting ceremony that took place today in Palazzo Guidoni, at Centocelle airport, headquarters of the general secretariat of defense and national armaments directorate, for the naming of the meeting rooms on the seventh floor.

In particular, General Broglio is considered a precursor of space exploration for his work on rocket engines and in the development of the "San Marco Project" in the mid-twentieth century. The frigate captain Calderara and General Savoja served at the Centocelle airfield, where they received their first flying lessons from Wilbur Wright at the beginning of the 900th century.

The ceremony took place in the presence of the relatives of the aforementioned officers and civil and military authorities. The military chaplain, Don Salvatore Nicotra, blessed the commemorative plaques.

The secretary general of defense and national director of armaments, general of the army corps Luciano Portolano, after a brief address, expressed his satisfaction for having entitled the rooms to three figures of officers who are still points of reference today nationally because they have been able to combine the physical and moral courage of the military with wide-ranging technical knowledge. The general also highlighted how much the decision to name the meeting rooms of the general secretariat after three personalities who have given prestige and prestige to the Italian Armed Forces has been felt and shared on an inter-force level.

On the proposal of the Minister of Defense, the Honorable Lorenzo Guerini, the President of the Republic, with Presidential Decree of 17 ...
7085
Read

The commander of the Northern Operational Forces, general Salvatore Camporeale, accompanied by the commander ...
1725
Read

In recent days, the first meeting in presence took place in the city of Cassino, after the period of restrictions ...
431
Read

"It is necessary to urgently evacuate all compatriots currently present in the territory and it must be done in the way ...
2208
Read

The cross-border rescue exercise ended in the late afternoon today, at the Parco Giona area ...
1445
Read

The Deputy Chief of the Defense Staff, general of the army corps Carmine Masiello, delegated by the head of state ...
543
Read

A delegation from the General Secretariat of Defense, led by Major General Rodolfo Sganga, head of the III ...
332
Read