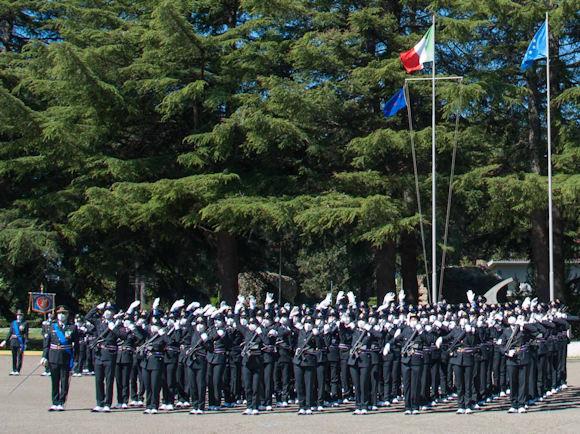 Thursday 28 April, at the Marshals School of the Air Force / Viterbo Airport Command, the students of the Air Force marshals belonging to the 24th normal course have solemnly pledged to honor the ideals of loyalty, courage and sense of duty, founding values ​​of the Armed Force.

The ceremony was presided over by the Chief of Staff of the Air Force, air squad general Luca Goretti; were present, among others, the commander of the Schools and of the 3rd air region, general of the air squad Silvano Frigerio, the chief president of the non-commissioned officers, graduates and troops for the Air Force, 1st lieutenant Giuseppe Giannetti, and the highest civil and military authorities of the city of Viterbo.

Also present was the Musical Band of the Air Force which accompanied the salient phases of the Ceremony with the notes of its masters.

Particularly exciting is the moment of the "I swear" made solemn by the overflight of a formation of aircraft Euro Fighter of the 4th flock of Grosseto.

During the ceremony, the baptism of the course was also held, which was given the name of Elios II, given by the bishop of the City of Viterbo, Msgr. Lino Fumagalli and the subsequent "blessing of the pennant" in the presence of the godfather of the course, 1st m.llo Giuseppe D'Urso of the 32nd flock of Amendola. 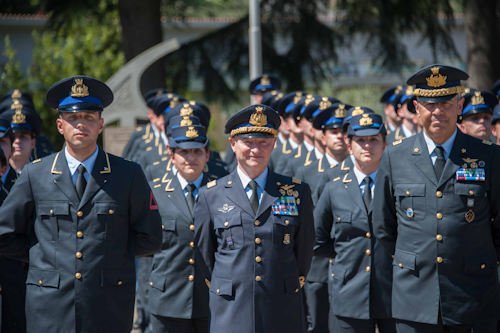 The commander of the Air Force Marshals School and of the Viterbo Airport, Colonel Sandro Cascino, after thanking the authorities and the guests who attended, addressed the protagonists of the day: “I look at you with sincere pride and affection. Only a few months ago I met you personally one by one, in plain clothes, as simple candidates. Now I see you here, unrecognizable from those early days, proud soldiers who impeccably wear our splendid and glorious uniform in front of the leadership of the Armed Force, soldiers ready to shout the fateful one I swear, not for mere formality but because you believe in it. and you deserve it and I guarantee it. [...] With the promise you are about to make today, take on an intimate and profound moral commitment that forms the basis on which to set up and build your life, accept the honor of being an example and a reference for all compatriots who seek in military institutions the place to place one's trust and entrust one's security, today more than ever. "

"From today our team in blue is enriched with new lifeblood by welcoming these girls and boys through a solemn promise that is not only a commitment for the future but, above all, a continuous source of inspiration in every activity that they will be called to carry out" declared the chief of staff of the Air Force, air squad general Luca Goretti, addressing the jurands. “With the Oath we take on those duties that constitute the essential traits of the status of us soldiers, our vocation to serve the country and the absolute loyalty to the homeland that we undertake to defend to the utmost sacrifice. Loyalty, discipline, honor, duty, the principles declined in the very formula of the Oath constitute the founding elements that substantiate all military personnel dedicated with humility, generosity and self-denial to the good of the community. "

The 24th normal course arrived at the Viterbo Institute last December 6, 2021 and is made up of 89 attendees; 87 of these attend the Science and Techniques curriculum of the Aeronautical Professions pertaining to the L36 degree class (Political Sciences and International Relations) at the University of Tuscia in Viterbo and 2 the Nursing Course at the branch office in the capital of Tuscia of the " Sapienza University of Rome ".