Urgent medical transport: two consecutive missions carried out by a C-130 of the 46 ^ Pisa Air Brigade 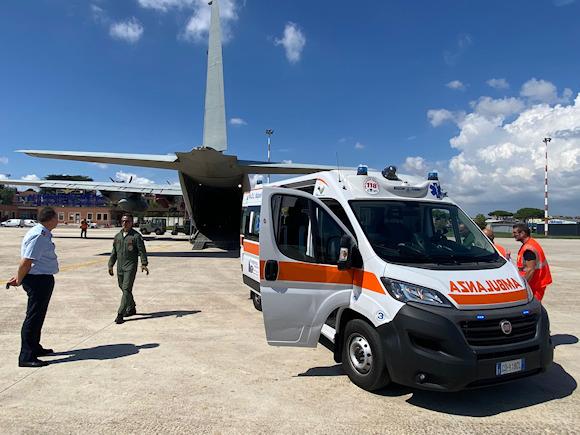 The first transport, in favor of a forty-year-old in need of an urgent life-saving intervention, took place from Naples to Venice, where the C130 of the Air Force landed at 16:30, unloading the patient, boarded on board an ambulance and constantly assisted by a medical team. From here, the man was urgently transported to the Hospital - University of Padua, to be subjected to a delicate operation.

Immediately after the conclusion of the first mission, the crew and the aircraft received a new one task, as they say in technical jargon, for another transport of a patient in serious condition. The aircraft then took off for Sardinia, where it landed at about 19:30 pm, at the military airport of Decimomannu. A fifty-one-year-old man embarked here, in imminent danger of his life, also in this case aboard an ambulance and under constant medical supervision. The aircraft then took off for Milan Linate, where it landed at 2230. From here the patient was quickly transferred to the Niguarda hospital for the necessary treatment.

At the conclusion of the two missions, the C-130 finally returned to the base, the military airport of Pisa.

For both flights, requested respectively by the Prefectures of Naples and Cagliari at the Summit Situation Room of the Rome Air Team Command, the management and coordination were conducted from the operations room of the command of aerospace operations based in Poggio Renatico (FE), which has activated the 46 ^ air brigade, one of the flight departments of the Italian Air Force that ensures the transport of personnel and material wherever it is required.

Two months after the similar ceremony held in Lecce in Piazza Duomo in the presence of the president of...
2483
Read

Friday 18 November took place at the Volunteer School of the Air Force of Taranto (SVAM), the ...
244
Read

On Wednesday 26 October, at the military airport of Pratica di Mare (RM), the ceremony for the change of ...
378
Read