Home News armed forces Heaven Hand over to command of the 61st s ... 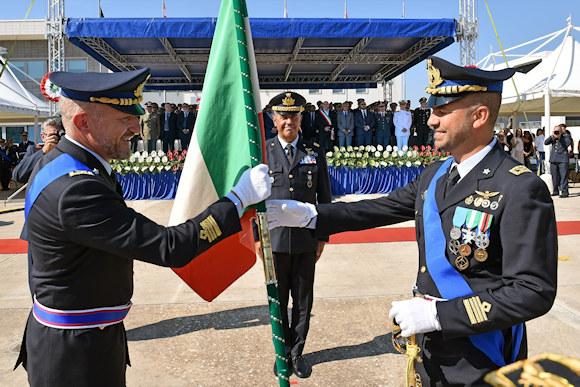 This morning, inside the military airport "Fortunato Cesari" of Galatina (LE), the ceremony of change in command of the 61st flock, between Colonel Filippo Nannelli and Colonel Vito Conserva, took place. The event was chaired by air squad general Silvano Frigerio, commander of the AM / 3 Schoolsa Bari aerial region.

Colonel Nannelli, who leaves his post after two years of intense work, retraced the most significant moments of his mandate, expressing words of sincere gratitude to the men and women of the 61st flock. "I am thrilled to think about how many things we have done together and how fundamental your every single contribution has been" he underlined in his farewell speech, defining the Salento aeronautical department "not an operational flock, but certainly among the most industrious realities of our Armed Force". He then wanted to recall the motto which, in some way, summarizes the history and mission of the Galatina Flight School "At the service of the country, with tradition in the heart, innovation in the mind and always looking towards the future!".

Colonel Vito Conserva, the new commander, was born in Grottaglie (TA) in 1976. In the introductory greeting, he said he was honored and enthusiastic to have been called to lead a department that "represents the excellence in the field of training and flight training of Italian and foreign pilots and is an invaluable asset for the country, consisting not only of means, systems and infrastructures, above all of peculiar human and professional skills, of values balances, and from consolidated traditions ". 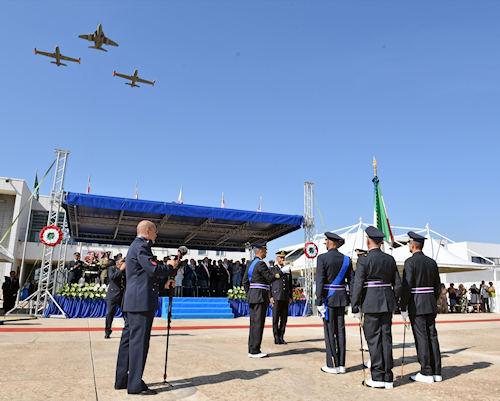 General Frigerio first of all thanked Colonel Nannelli for the quantity and depth of the results achieved - "On the occasion of the rituality of this alternation ceremony, which underlies the founding principle of military institutions - that is, continuity in change - to you officers, non-commissioned officers, troops and civilian personnel of the flock I wish to address my personal appreciation for the high professionalism that you have constantly expressed in the activities conducted under the careful and punctual guidance of Colonel Nannelli "- wanted to underline - "As commander of the Air Force schools, I would like to highlight the fundamental function that this department has for the training of visitors who face a demanding and intense training process in order to obtain the military pilot's license. A department that has become a point of reference. reference in flight training not only in the national field, but also in the international one. Suffice it to say that since its establishment, now more than 75 years ago, to date the School has issued almost 9 military pilot licenses to the students of the Aeronautica Militare, the other Armed Forces and those of over 20 countries on four continents, as evidence of the quality and validity of the training offer, the competence and professionalism of the staff ". And addressing Colonel Conserva: "The future offers us increasingly complex and constantly evolving scenarios, unpredictable challenges to which we must respond; this requires continuous improvement in every sector, in order to continue the identity and capacity growth of the Air Force, as an indispensable component of the national military instrument. . To do this, we must continue with determination to invest in human capital - the only real enabler of the effects of Aerospace Power - through training and training, especially for us on the fly, which must be cost / effective and sustainable in the long run. period, as well as aimed at the use of 5th generation weapon systems in multi-domain operations. "

Dependent on the AM / 3rd Air Region Schools command of Bari, the 61st wing has the task of providing flight training on phase 2 jets - Primary Pilot Training, common to all military pilot students, aimed at identifying the lines on which they will fly (fighters, remote piloting, helicopters, transport); phase 3 - Specialized pilot training, aimed exclusively at student pilots selected for the "Fighter" lines, which ends with the achievement of the military pilot's license (turreted eagle); and phase 4 - Lead In to Fighter Training - LIFT, preparatory to the subsequent use on the latest generation fighter aircraft. The training activity of the 61st wing is aimed at student pilots of the Italian Air Force, other Armed Forces and allied / partner countries, in all flight phases according to the requests of each country.

Two months after the similar ceremony held in Lecce in Piazza Duomo in the presence of the president of...
2457
Read

Friday 18 November took place at the Volunteer School of the Air Force of Taranto (SVAM), the ...
243
Read