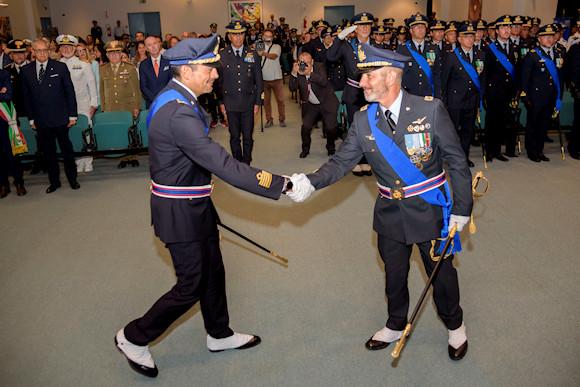 Thursday 01 September was held at the Aviation Training Center English the change of command ceremony between Colonel Luca Massimi, outgoing commander, and Colonel Giancarlo Filippo, incoming commander, in the presence of the commander of the Air Force Schools and 3a Bari Air Region, Air Squad General Silvano Frigerio.

The col. Massimi in his farewell speech underlined the importance of having had, during his time in command, a "special" team of women and men who worked with passion and professionalism, consolidating the excellence of the Formation Center, the only one of its kind in the Armed Forces. He also recalled the intense period full of events and satisfactions albeit marked by the pandemic: "... the constant and passionate work of the staff, however, made it possible to readjust language training to new contexts without renouncing the high standards of quality. A continuous improvement, in step with the times, which allowed to increase the training offer in inter-force area and to expand international cooperation ... ".

The col. Massimi then thanked the civil, religious and military institutions of the area for their proximity, effective collaboration and trust placed in the Training Center. At the end of the speech, col. Massimi wished the new commander "good luck", certain that he will be able to lead the Center towards ever more ambitious goals.

The col. Filippo, in his first speech as commander of the Formation Center, thanked the commander of the Schools / 3rd RA for the trust placed in him, underlining "... to have found, already in the first days of contact with the institution, highly motivated and professional staff, as well as perfectly integrated into the splendid reality of the Marche region ...". He also highlighted the importance of investing in the knowledge of foreign languages ​​by military personnel, a belief gained in his previous position at NATO Headquarters and the European Union in Brussels. And concluding: "... I feel a considerable responsibility deriving from the proximity of the Center to the Sanctuary of the Madonna di Loreto, invoking its blessing in these times pervaded by war on the borders of Europe and entrusting it with the protection of the community, as well as from just over 100 years ago with all the aviators, of which she is the patron saint ... ".

Air squad general Silvano Frigerio, commander of the Air Force Schools / 3rd Air Region, remarking how "... the precious and punctual proximity of the Institutions honors us and instills in all of us a great trust for the work done in profound synergy at the service of the people and the common good. I want to express my personal appreciation to all the staff for their high professionalism constantly expressed in the activities carried out, tangibly evidenced by the attribution to the Aviation English Training Center of a well-deserved recognition in the form of a Solemn Collective Commendation ". And addressing the incoming commander "... The future offers us increasingly complex and constantly evolving scenarios, unpredictable challenges to which we must respond; this requires continuous improvement in every sector, starting with training, in order to continue the identity and capacity growth of the Air Force , as an indispensable component of the national military instrument ".

Two months after the similar ceremony held in Lecce in Piazza Duomo in the presence of the president of...
2516
Read