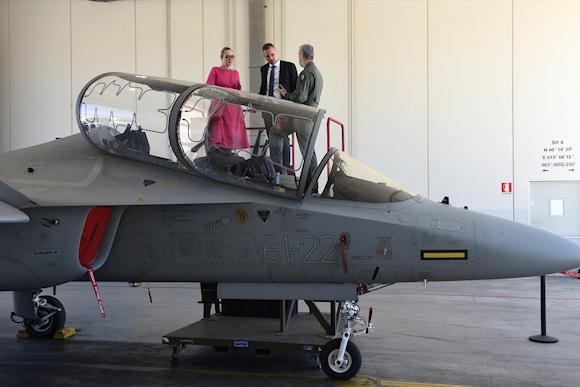 On Thursday 12 May, the Undersecretary of State for Defense of the Slovak Republic, Marian Majer, accompanied by the Ambassador of Slovakia to Italy Karla Wursterová, visited the 61 ° flock, the international flight school based on the military airport of Galatina (Lecce). The guests were welcomed by the air squad general Silvano Frigerio, commander of the Air Force Schools / 3rd air region, and by Colonel Filippo Nannelli, commander of the 61st flock.

After the customary greetings, Colonel Nannelli illustrated, in the course of a briefing, the history, the mission and the wide training offer of the school, underlining, on the one hand, the experience accumulated in over 75 years of flight training, on the other, the use of highly technological systems, all of national production , unique in the world.

The visit continued at the facilities dedicated to the preparation of pilots destined for the "hunting lines": inside the Ground Based Training System, the building that houses the "ground" segment of theIntegrated Training System (ITS) T-346, the platform used to train future "fighters" pilots, whose capabilities Live, Virtual and Constructive (LVC), not only allow the visitor to be able to train in extremely complex synthetic environments, but even manage to connect the simulators to the T-346s in operational activity, creating a network in which virtual aircraft, aircraft actually in flight and other elaborate synthetic tracks. on the computer, they carry out joint missions.

Tradition and innovation therefore, a mix that makes the Galatina flight school an international showcase of "Made in Italy" in the military pilot training sector and explains the interest of air forces from all over the world towards a Department that through its professionalism is one of the most significant expressions of the Armed Force's ability to be at the service of the country.

"The activity represented, once again, a precious opportunity to introduce other countries, in this case the Slovak Republic, to the national qualities and capabilities in the field of flight training" General Frigerio declared on the occasion, continuing: "We are aware that we represent excellence, thanks to the introduction of increasingly modern tools and training processes conformed to the latest generation weapon systems. We are also proud that so many countries from all over the world are attracted to this extraordinary scope. innovative of the training system used by the 61st Wing of the Italian Air Force ". 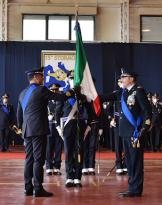 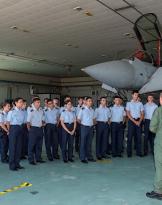 The students of the “Giulio Douhet” Military Aeronautical School of Florence visited the 4th flock of Grosseto to ...
157
Read

Today at the Aeronautical Detachment of Montescuro, the handover ceremony between the ...
236
Read