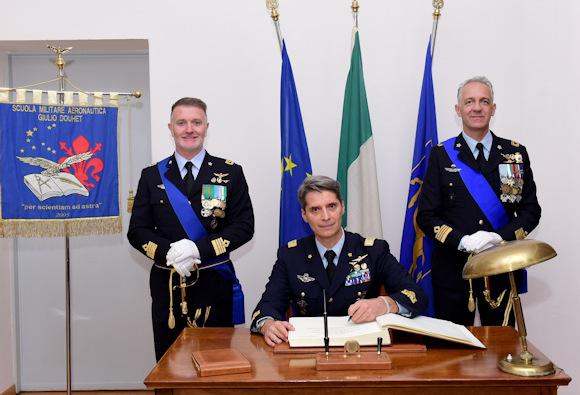 On Friday 21 October, in the presence of Brigadier General Urbano Floreani, commander of the Institute of Military Aeronautical Sciences of Florence, and of the highest civil, religious and military authorities of the Tuscan capital, the suggestive handover ceremony took place between Colonel Davide Rosellini, outgoing commander of the "Giulio Douhet" Military Aeronautical School and Colonel Massimiliano Macioce, incoming commander.

In his greeting speech, Colonel Rosellini, after thanking all his collaborators and teaching staff, recalled all the goals achieved under his command characterized by the difficult challenge posed by the pandemic emergency.

Addressing the students with emotion, he then praised their "courageous choice to undertake such a difficult path" inviting them to maintain "constancy and firmness in following their own moral code, in the continuous attempt to improve themselves.

The change of command ceremony reached its most evocative moment when the outgoing commander, after kissing the Institute Flag, handed it over to Colonel Macioce who, taking the flag and kissing it in turn, symbolically assumed the command of the School.

In his first speech, the new commander immediately expressed his emotion and gratitude for the prestigious assignment he is about to carry out. "To you students of the Douhet" - then continued Colonel Macioce - "I assure you of my personal commitment to allow you to follow a profitable path full of study and personal growth, reminding you that only through daily commitment can you achieve considerable results and personal satisfaction".

The air brigadier general Urbano Floreani finally took the floor congratulating the outgoing commander for having been able to play a difficult role with the authentic spirit of the School, managing to instill in the students the important principles and values ​​of tradition, so that they can become relevant for the changes in the future society. Furthermore, he wished the incoming commander to be able to continue, in the wake left by his predecessors a "to guide the School in a firm but wise way, with determination mitigated only by the will and ability to listen and always inspired by the highest values ​​of civilization, morality and ethics".

Colonel Macioce, coming from the Office of the Defense Attaché at the Embassy of Italy in Saudi Arabia, thus assumed command of the "Giulio Douhet" Military Aeronautical School, a secondary school that carries out the courses of the second three years in the classical and scientific fields, which can be accessed by public competition. The aim of the Institute is to encourage a balanced growth for students from a human, cultural, moral, physical and character profile so that they have the necessary skills to become good citizens and face the challenges of tomorrow, regardless of the future life choices of each. student.

Two months after the similar ceremony held in Lecce in Piazza Duomo in the presence of the president of...
2309
Read

Friday 18 November took place at the Volunteer School of the Air Force of Taranto (SVAM), the ...
240
Read

First test landing this morning on the new Antarctic airfield designed by the Italian Air Force and ...
3892
Read

Thanks to a synergy between the 1st air region command, the Dobbiaco airport branch, the efficiency group...
954
Read

Further strengthen the collaborative relations between the two Nations and consolidate the foundations for future and profitable ...
506
Read

On Wednesday 26 October, at the military airport of Pratica di Mare (RM), the ceremony for the change of ...
376
Read