Home News armed forces Heaven The head of the corps of the aeronautical genius, g ... 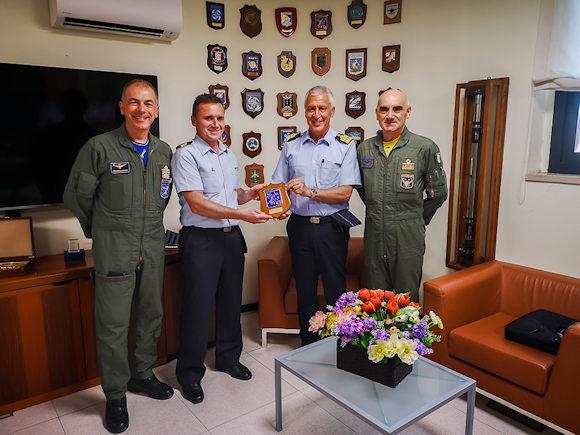 On Tuesday 5 July, the head of the body of the aeronautical genius, general inspector chief Giuseppe Antonio Lupoli, met the personnel of the Physicists and Geophysicists role, belonging to the body of the aeronautical genius. The meeting was held in the conference room of the Operational Center for Meteorology (COMet), at the Pratica di Mare Airport, and the staff of COMet and the National Center of Aeronautical Meteorology and Climatology (CNMCA), of the IV General Office of Military Aviation and Meteorology of the AM staff, directed by col. Adriano Raspanti, area contact person for the head of the aeronautical engineering corps, of the weather office of the general staff of the air team command and of the technical meteorology center of Vigna di Valle.

The event took place as part of the fact-finding visits that gen. Lupoli is carrying out with all the components of the aeronautical genius, engaged in a renewal process aimed at the realization of the mission and  vision about to of the Air Force, to the sharing of processes and the optimization of resources, an articulated and complex undertaking that involves the entire aeronautical engineering sector and to which the personnel belonging to the meteorological service are called to give their contribution.

Colonel Daniele Gaboli, commander of the COMet and director of the CNMCA, presented the organization and specificities of the two host bodies, explaining how physicists and geophysicists are used in the two main bodies of the AM meteorological service, underlining the imminent provision reorganization which will see the two departments merge into a single organizational unit.

The col. Adriano Raspanti, head of the 4th meteorology office of the AVIAMM of the SMA, as "senior officer", of the meteorological service of the AM, presented an excursus of the numerous activities carried out by the weather department of the Armed Force, not only with the two bodies mentioned, but also with the technical center for meteorology of Vigna di Valle, a body thatWorld Meteorological Organization (OMM) recognized as a "Historical Observatory" for providing support to pioneering flight activities starting in 1910, and with the Mountain Air Force Center (CAMM), of Monte Cimone / Sestola (MO), which since 1937 has been carrying out activities dedicated to the sectors of flight assistance, telecommunications and meteorological and environmental measurements. The col. Raspanti also focused on the representation activities that the AM meteorological service, by virtue of specific legal provisions, carries out in the various supranational organizations such as theWorld Meteorological Organization (OMM), the European Center for Medium-Term Forecasts (ECMWF) and the Eumetsat consortium.

The col. Pier Francesco Coppola, head of the weather office of the command of the air team - staff, at the specific request of gen. Lupoli, presented the proposed reorganization of some of the departments of the weather sector, a measure currently being approved by the top of the Armed Forces, emphasizing the constraints and limits, especially numerical, on the basis of which this proposal was consolidated.

Subsequently, the gen. Lupoli, chaired a large session of confrontation with the staff present, underlining the importance of the body of the genius in the reality of the Armed Force.

The meteorological service of the Air Force, operates throughout the national territory for the fulfillment of the assigned tasks, carrying out activities of measurement and monitoring of the atmosphere, centralization, data processing and processing, production of climatological and meteorological products for the needs of the Defense sector, with particular reference to assistance to military and civil air navigation, to support for operations inside and outside national borders, to support for State entities - among which the national civil protection department stands out - and to representation in organizations national and supranational such as NATO, OMM, ECMWF and Eumetsat.