Gen. Agresti new inspector of the Aviation for the Navy 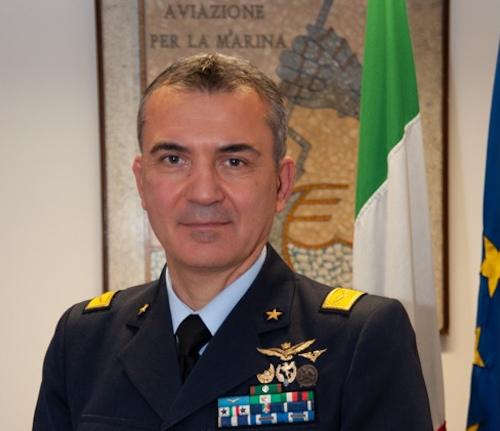 Last October, at Palazzo Marina, took place the alternation in the post of inspector of the Navy Aviation, between the air brigadier general Carlo Moscini, outgoing inspector, and the air brigadier general Francesco Saverio Agresti, inspector taking over. In compliance with the provisions in force on Covid-19, the presentation to the Chief of Staff of the Navy, team admiral Giuseppe Cavo Dragone was organized privately.

In this confidential context, the general of ba Carlo Moscini thanked Admiral Cavo Dragone for the trust granted in the period in which he held the post, expressing his deep gratitude to the general staff for the constant support received. The Chief of Staff expressed great appreciation for the work done, praising the ability shown by the office to operate with autonomy and competence, constantly seeking shared and synergistic solutions with all the divisions of its staff.

General Agresti, who left the prestigious international post of deputy commander of theEuropean Air Transport Command of Eindhoven, Netherlands, aware of the upcoming challenges of the MPA (Maritime Patrol Aircraft) component, thanked the authority, guaranteeing the continuity of the commitments made with the assumption of the new assignment, which took place on 31 October.

The Aviation for the Navy has the task of conducting anti-submarine air operations and concurrence with the surface naval forces, using maritime patrol aircraft assigned to the flight department. It consists of the complex of aircraft and crews, vehicles and infrastructures, as well as ground technical personnel designed to meet specific needs.

In 1957 the founding act of the Antisubmarine Aviation was issued which provided, at a central level, the office of the inspector of the Navy Aviation, headed by a general officer of the Air Force. It is a particular organism which for its peculiar activities has a double dependence on the Navy and the Air Force. The aircraft of the 41st wing, hierarchically subordinate to the office of the Navy Aviation Inspector, depend on the Navy for the use of the primary mission, which evaluates and determines all the operational missions that can be assigned to them; technical-logistical activities and technical-professional training, as well as use for secondary missions, are the responsibility of the Air Force.

Furthermore, the characteristics of the new P-72A weapon system, assigned to the department in November 2016, enable new capabilities in complex and dynamic scenarios with strong characterization Joint. The Office of the Inspector of the Navy Aviation manages the integration of the structure in the relevant operational frameworks in order to consolidate the contribution of the component to the security of the country and its vital interests.

On Thursday 26 May, at the Badoni hangar of the Air Force Historical Museum in Vigna di Valle, the ...
177
Read