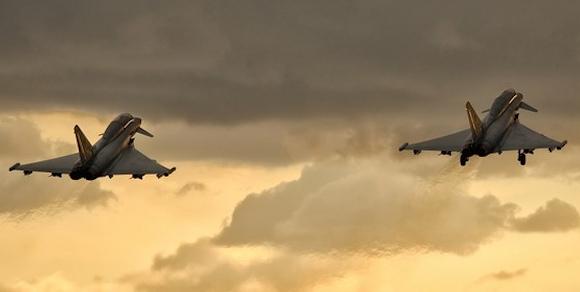 Around 16.30 on 18 September, two interceptor fighter aircraft Euro Fighter of the Italian Air Force took off from the Gioia del Colle (BA) air base, home of the 36th fighter wing, to reach and identify a Boeing 737 transport aircraft that took off from Suceava (Romania) and headed to Ciampino (RM). The civil aircraft during the route had temporarily lost radio contact with the national civil air traffic bodies.

The immediate take-off order, in technical jargon "scramble", was given by the CAOC (Combined Air Operation Center) of Torrejon in Spain, the NATO body responsible for the area, in coordination with the aerospace operations command (COA) of Poggio Renatico and the bodies of the Armed Force responsible for the surveillance of national and NATO airspace.

The Boeing 737 just before being reached by the pair of interceptors restored radio communications. However, the planned "visual identification" (VID) procedure was completed by the two fighters who subsequently returned to Gioia del Colle to resume the ground readiness shift for the national airspace surveillance service.

Two months after the similar ceremony held in Lecce in Piazza Duomo in the presence of the president of...
2684
Read