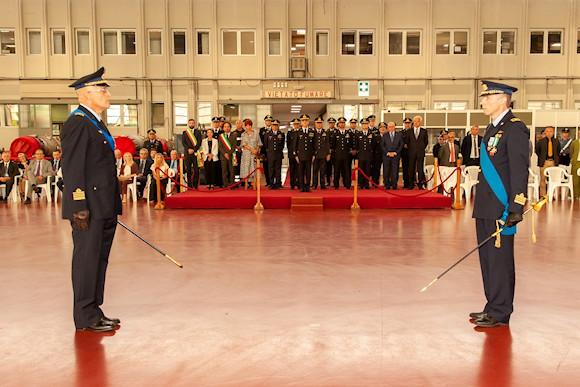 Wednesday 07 September 2022, at the 1st aircraft maintenance department of Cameri, the ceremony was held for the change of command between Colonel Danilo Figà, outgoing director, and Colonel Cristiano Realacci, taking over.

The handover ceremony was presided over by the commander of the 2nd division of the logistic command, Brigadier General Cristiano Bandini, in the presence of the local authorities, the Weapon Associations and the guests present.

Colonel Figà, during his speech, wanted to thank the men and women of the department for their commitment and the flattering results achieved: "To you women and men of the Department goes my greatest thanks: during these two difficult years, due to the pandemic crisis, you have distinguished yourself for self-denial, will and spirit of sacrifice, qualities that have allowed us to achieve the objectives set by DOES".

Colonel Realacci then took the floor and thanked the superior authorities for the trust they had given him and then greeted the guests who attended. During his speech, addressing the staff of the department he said: "you are the most important resource that I will be able to use during my period of command, with your professional competence and knowledge you constitute the real competitive advantage, the real driving force for achieving future goals with maximum effectiveness".

Brigadier General Cristiano Bandini, during his speech, addressed a brief greeting to the guests present and thanked the outgoing director for the effort made in these two years and for the brilliant results obtained despite the effects of Brexit on the Supply Chain of weapon systems Tornado e Typhoon and the pandemic crisis. Then addressing the staff of the 1st RMV he wanted to underline: "You were the orchestra that, thanks to its conductor, managed to play like a single great instrument, developing an atmosphere of constructive industriousness and reaching absolutely ambitious goals such as that of producing 14.000 flight hours for the Typhoon line". He then addressed a wish to Colonel Realacci for future challenges: "the steering rod passes today to the new director, who was also trained in the experimental flight department like his four immediate predecessors, and I am sure that he too will be able to decline the role assigned to him in an equally valid and effective way, with his personality and his style of leadership ".

Finally, he wanted to represent his closeness to the staff of the department: "I will never miss my personal support, through me, that of the logistic commander and of the whole Armed Force, because the assigned objectives can actually be achieved".

Two months after the similar ceremony held in Lecce in Piazza Duomo in the presence of the president of...
2456
Read

Friday 18 November took place at the Volunteer School of the Air Force of Taranto (SVAM), the ...
243
Read