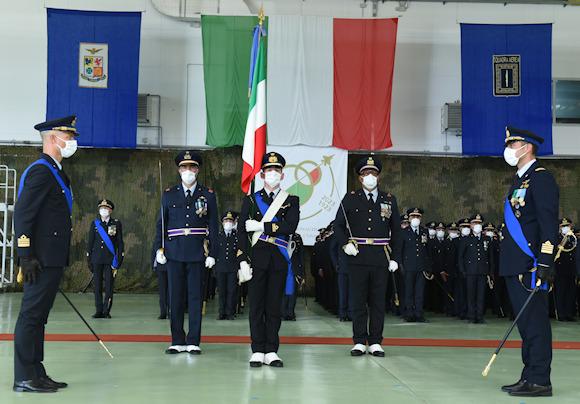 The ceremony, which was presided over by the commander of the command of combat forces of Milan, general of air division Luigi Del Bene, took place in the presence of the military, civil and religious authorities of the territory.

The change in command was preceded by the replacement of the banner of the War Flag which was then given to Colonel Pomiato by Colonel Vergallo after having pronounced the ritual formula.

Colonel Vergallo, in his farewell address, greeted all the military and civil personnel of the department, underlining the importance of the goals achieved in a two-year period full of operational activities at home and abroad. This is the thought of him: "The epilogue of a great professional experience spent in a glorious department, rich in history, traditions and with the most decorated War Flag of the Air Force. The valor, the strong military virtues, the commendable spirit of sacrifice of the staff and the exemplary efficiency that has always distinguished this department have allowed us to achieve extraordinary results in the various international operational contexts ". In conclusion, he then added: "I address all the staff of this glorious department a dutiful thanks for how they have operated and for how they continue to do so in support of a reality constantly placed at the service of the country".

Afterwards Colonel Pomiato took the floor who, in thanking the superior authorities for the trust placed in him in the assignment of the prestigious post, highlighted the significance of the role played by each member of the flock as guardian of the values ​​that the War Flag represents.

The ceremony ended with the intervention of the general of the air division Luigi Del Bene, who, after having addressed a respectful greeting to the highly decorated War Flag of the 36th fighter wing and addressed a moving thought to the fallen who honored it with the their extreme sacrifice in the service of the Fatherland, highlighted how "the continuity of the department's mission, both nationally and in complex, dynamic and challenging foreign scenarios, requires an effort to be always ready and trained to the best of our ability. You have done it very well in NATO, as well as in coalition ambit in support of Operation Inherent Resolve, in major international exercises and in numerous national activities, among which I mention the recently concluded 'Typhoon Flag' which marked the first Force Integration Training of a long series. The high standards achieved must be kept as they are because they are consistent with the DNA of the 36th hunting flock ". Regarding the work of Colonel Vergallo, the general highlighted: "To Antonio, whom I know from his period of attendance at the Academy and from flying schools, I say very good! You have been able to create stability in the working environment in the face of so many difficulties, even during the acute phase of the pandemic. You believed in your people, you have empowered them and generated opportunities for professional and human growth ". Finally, addressing Colonel Pomiato, to whom he addressed a warm welcome to the 36th hunting flock, he commented as follows: "I am sure that thanks to your skills and motivation, known to me, you will be able to enthusiastically accept the challenges of the new assignment and lead the 36th hunting wing to ever greater successes. You have great potential and this is the opportunity that the Force Armata gives you, placing the utmost trust in you. Know that my command and I are ready to support you whenever it becomes necessary ".

The 36th "hunting" flock of Gioia del Colle is employed by the command of combat forces (CFC) of Milan, whose assigned mission is to acquire and maintain the operational readiness of all air defense and attack and reconnaissance bodies, ensuring the operational efficiency of weapon systems, vehicles and materials, as well as staff training and constant updating and optimization of operating procedures, in compliance with the guidelines of the SS.AA. The CFC is employed by the air team command that exercises the duties regarding training, preparation and operational readiness of its Departments, so that they acquire and maintain the required levels of operational readiness. The 36th "fighter" wing is one of the 5 Italian Air Force wings that ensure national air defense and Quick Reaction Alert of NATO.