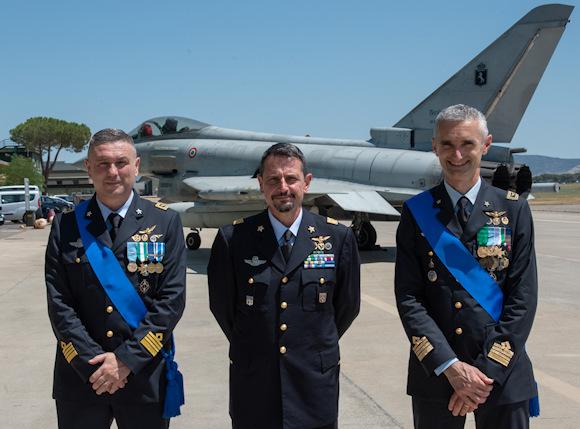 Today, at the "Corrado Baccarini" airport of Grosseto, the handover to the command of the 4th fighter wing of the Italian Air Force took place.

The ceremony was presided over by air division general Luigi Del Bene, commander of the combat forces, in the presence of the civil and military authorities of Grosseto and the province.

Colonel Zaniboni, commander of the 4th flock since July 2020, in his farewell speech, recalled the successes obtained and the difficulties faced in these two years characterized by the COVID pandemic, which however did not interrupt the activity of the Department: "You have continued to ensure Air Defense not only in your homeland and on the neighboring Slovenia, but also the protection of the most distant borders of NATO, in defense of national and European sovereignty. Just think of the eight months in Lithuania, the three in Estonia, the seven in Romania during which you responded with almost immediate timing to the unexpected Ukrainian crisis, which is still dramatically topical. All this while we were also involved in the Middle Eastern Operational Theater, within the international anti-Daesh Coalition ". Colonel Zaniboni, addressing the staff, then went on to highlight how "... the 70th anniversary of the establishment of the Quarto, the XNUMX thousand hours of flight on Eurofighter of the department and the medal to the Military Order of Italy delivered to the Quirinale by President Mattarella to our War Flag have further recognized the excellent teamwork and seals the goals that could not have been achieved without the contribution of all of you ". Colonel Zaniboni will assume the position of head of the 2nd office "recruitment, legal status and advancement" of the 1st organization and personnel department of the Air Force staff.

Colonel Monti, assuming command of the flock, will have to face two years that look just as demanding. His mandate will also be marked by the celebrations of the 100 years of the Air Force (March 28, 2023) "My career was born here in Grosseto in 1998 and right here, in one of the oldest Departments of the Air Force" declared the new commander, "I was able to immediately learn those unique values ​​of loyal service to the homeland, professionalism and passion that I have tried to cultivate throughout my career to date. It is you, the women and men of the 4th flock who, over the years, with your example, your dedication, your spirit of collaboration and your unique skills you have represented for me a reference not only professional but of life, which I will try not to disappoint right now that I am about to become your commander ".

The ceremony ended with the intervention of General Del Bene, who underlined how "... today's event, together with the Department, focuses on a typical paradigm of our organization, that of alternating mission continuity and command action. A continuity of mission dedicated to the defense of airspace and the generation of multi-role effects through the effective use of the high-tech capabilities assigned to the 4th wing. An effort that is required of us both at home and beyond national borders in complex, dynamic and challenging scenarios ". Continuing, in relation to the command action, the general highlighted how "... commanders are catalysts of responsibility, they are delegates of authority to carry out their assignment, but it is important to remember that authority does not come with the assignment, nor with the rank. It is earned 'in the field' with the commitment, dedication and example that are offered every day at the service of the organization and its staff ". Then turning to Colonel Zaniboni "To Eros, whom I have known for a long time in the Academy and flight schools, I say: Bravo! As commander you led this glorious department with convinced participation, deep dedication and decision, exercising an effective and far-sighted action, always supported from the example of your behavior and an inclusive approach ". Concluding his speech, addressing Colonel Monti "In the coaching period that you have just concluded, there are a couple of summary elements that are important: always aiming forwards and higher BUT in the groove drawn and that the 4th wing is a train that has no stations. I am sure that thanks to your undisputed skills, human skills and the indispensable support of the personnel, you will achieve all the expected objectives. To this end, you will not lack the guidelines and the support of the Combat Forces Command that I assure you from today ".

The 4th Wing is dependent on Air Squad Command through Combat Force Command. Ensuring the air defense of the area of ​​national interest, contributing to the control, since peacetime, of the relative airspace and carrying out air defense operations in the assigned areas, as part of the participation in international operations for the prevention and management of the crisis. Specifically, the department is engaged in the alarm service, 365 days a year, 24 hours a day, through the use of the aircraft Euro Fighter. The 4th wing is also responsible for ensuring the operational conversion of the pilots of the Armed Force to be employed in the line Euro Fighter F-2000.

Today at the Aeronautical Detachment of Montescuro, the handover ceremony between the ...
181
Read