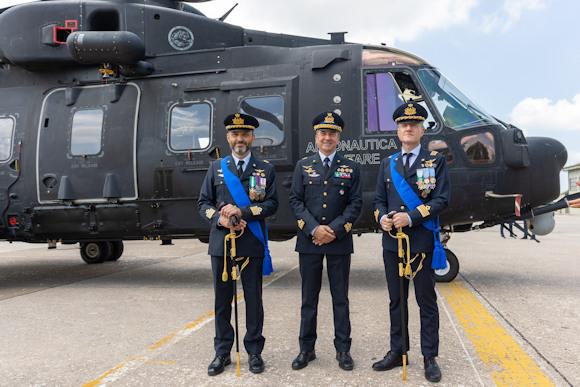 The ceremony, presided over by the commander of the 1st Special Operations Air Brigade, Brigadier General Riccardo Rinaldi took place in front of the highly decorated War Flag of the 9th Wing and with the participation of a representative of personnel and local civil, military and religious authorities , in compliance with the requirements dictated by the emergency situation in progress.

Colonel Nanni, after two intense years of command of the 9th wing, characterized by the arrival of the HH-101A helicopter and by many other activities related to the construction of the new airport infrastructures to host the new weapon system, thanked the authorities intervened for the closeness, esteem and affection always shown towards the "Prancing Horse" department. During his speech, Colonel Nanni highlighted how all the objectives set were achieved thanks to the commendable commitment of all the staff, addressing the women and men of the 9th flock with words of heartfelt thanks and gratitude for the work done: "When I arrived here I was convinced (and I still have it) that to work well you had to work on 3 main pillars: flexibility, determination and awareness: on the first two fields I had nothing to teach you because nothing beats you. on these aspects; for which my work was simple, I worked only on awareness or simply to share with you what I had in mind. Solving problems, facing obstacles, exploring the unexplored, always succeeding in what you do, have the courage to embark on new adventures no matter how difficult, always face the opponent no matter how strong he is: this is the daily bread, this is the most congenial terrain of action for you; you have done it in an excellent way ".

After the handover, the incoming commander, Colonel Valente, in his speech, after thanking the guests and the authorities, his predecessor for the work carried out at the head of the department, addressing the staff of the 9th wing was able to underline : "In your faces and in your way of being and working, I find part of me. I find that model of righteousness, dedication and passion that our older colleagues taught me almost 23 years ago, when I took my first steps as a young lieutenant. . Just as I have done throughout my aeronautical career, it is this model that I will continue to inspire myself as your Commander: righteousness, dedication and passion, in the wake of the consolidated traditions of the 9th Wing. I am going to undertake, with you, this new and exciting experience along the transformation path of the Department and the base to the 4th generation. In doing this, we will continue to operate safely to guarantee the country the level of operation that has always distinguished us ".

In the closing speech of the ceremony, Brigadier General Rinaldi, after paying a respectful salute to the War Flag of the 9th Wing, thanked Colonel Nanni for the work done: "Andrea, I don't think there can be a better word to describe your work which is: good! The Department has seen numerous, important and substantial transformations in recent years, which required a heavy effort, but it is above all the results that speak for themselves. for you. The constitution of the flight crews dedicated to special operations and the recognition obtained by your department following the Aquila Omnia operation are just some concrete testimonies of your excellent work. As Commander it was a pleasure and a privilege to have you at mine addictions ". He then went on to formulate the most vivid "good luck" to Colonel Valente: "Massimo, today a new page opens in the history book of the 9th wing and it's up to you to continue writing it and I'm sure you will make an important contribution".

Today at the Aeronautical Detachment of Montescuro, the handover ceremony between the ...
181
Read