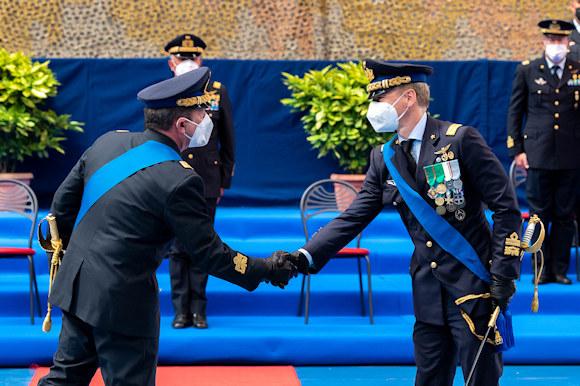 General Cazzaniga, in his farewell speech, addressed a heartfelt appreciation to the personnel who supported him in his more than two years of command: "[...] I leave the command of the Forces for Mobility and Support, a unique team of its kind, strong in an extraordinary DNA and the result of a centenary evolution. [...] At the CFMS I met exemplary professionals, animated by an iron will to complete the assigned mission, to achieve, with method and patience, new capacitive and training objectives in order to be ready to face even the most urgent and unpredictable situations. Awareness of one's role, the exaltation of doing in place of appearing, the serenity of daily work have marked these last years despite the complexity of the moment and the urgency that characterized our interventions. [...]. The general then continued: "... The results achieved are the testimony of our real essence. To serve in all circumstances by working together in synergy by communicating and coordinating our effort between the various departments, with the command of the air operations and the command of the air team. The concession in the latter. years of three gold and four silver medals for Military Valor to our departments (including that of the CFMS), and 44 bronze and 33 silver medals for Aeronautical Valor to the soldiers serving in our bodies, are the demonstration of the service rendered to our country. [...] ".

The General of the Air Division Enrico Maria Degni, in his speech, expressed his gratitude to the Armed Force for the attribution of the new command post and underlined how: "... After 11 years I return with pleasure to the operational area of ​​the Armed Force, the command of the air squad, an area that from the outside I have seen progressively transform in terms of means, technology, competence and professionalism and which is capable of to express abilities of absolute respect in the international context. It is, therefore, with pride that I am about to take command of the forces for mobility and support, which has the task of ensuring the training of personnel and the operational readiness of the vehicles intended to the operational capabilities of projection, protection, surveillance and command and control, fundamental expressions of aerospace power. [...] ".

The ceremony ended with the intervention of General Biavati, who underlined that: ..."the service performed by Gen. Cazzaniga, in an 'exceptional' historical period, has achieved 'exceptional' results thanks to the availability of 'exceptional' staff from the CFMS and the dependent departments, who have always responded quickly, professionally and commendably to the health and humanitarian emergencies in Italy, in every corner of the world and in every operational theater. The State and the Nation know that they can count on you 24 hours a day, 365 days a year and especially when the going gets tough '[...] "

Command of the Mobility and Support Forces (CFMS) depends on the command of the air team. It constitutes the center of excellence for the Armed Force in the context of combat support, the complex of operational capabilities that includes, among others, theAirlift Transportation, L 'Air-to-Air Refueling, Combat Search And Rescue (SAR), the Force Protection and Special Operations.

Today at the Aeronautical Detachment of Montescuro, the handover ceremony between the ...
159
Read