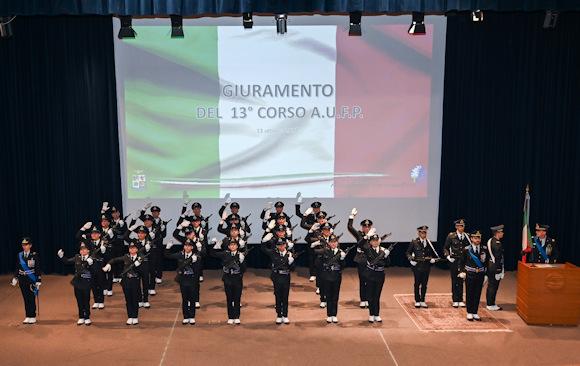 On Thursday 13 October 2022 at the Auditorium of the Aeronautical Academy of Pozzuoli, the collective swearing ceremony of 26 students belonging to the 13th officer cadet course in pre-established firm (AUFP) took place.

The students - 18 of the special weapons role, 3 of the aeronautical engineering corps special role and 5 of the aeronautical commissariat special role - have sworn allegiance to the Italian Republic in collective form, in front of the Flag of the Institute, in the presence of the commander of the Air Force Academy, Brigadier General Luigi Casali.

The ceremony was attended by the families of the young sworn candidates and a representative of the permanent staff.

General Casali, after thanking the families for the fundamental role played in the education and growth path of their children, underlined the importance of today's ceremony: "An oath that commits us to respect a series of new duties that characterize military status and that must inspire and guide our daily work that will lead us to face new challenges at the service of our country in complex international scenarios that always see us more committed beyond national borders. I am sure that you will be able to integrate quickly and completely within the great family of the Air Force. ".

The 13th AUFP course, whose training course will end in October 2022, was incorporated into the Armed Forces last July 4th. Subsequently, the suitable patrons will be assigned to the units of the armed force.

The training process of the AUFP course consists of two phases, the first, defined as "military" and carried out by all attendees, has the purpose of providing basic military preparation, providing transversal subjects such as command tasks and functions, Defense and AM, military logistics and communication techniques.

The second phase, on the other hand, called "professional", differs according to the role and category of belonging and has the purpose of providing the knowledge and specific skills useful to guarantee the subsequent and effective employment in the departments of the Armed Force.

As per tradition, the new AUFP course has been given a name, the initial of which is agreed with the younger regular course, Centaur VI: "Cherokee".

The Air Force Academy is under the command of the Air Force Schools / 3rd Air Region. It is a military institute of higher education with a university character which has the task of providing for the recruitment and training of young people who aspire to become officers of the Air Force.

By attending the regular courses of the Academy you can become second lieutenants in effective permanent service of the Air Force, in the role of normal navigators (pilots) and in the normal role of weapons, aeronautical genius, the aeronautical commissariat corps and the aeronautical health corps. Courses are also held at the Institute for officer cadets (pilots and complementary navigators and fixed stops) and second lieutenants with direct appointment (both for the normal role and for the special role); finally, in the Academy's study plan, courses with a specialized aeronautical connotation are provided for foreign personnel and other Armed Forces.

Two months after the similar ceremony held in Lecce in Piazza Duomo in the presence of the president of...
2499
Read

Friday 18 November took place at the Volunteer School of the Air Force of Taranto (SVAM), the ...
244
Read

On Wednesday 26 October, at the military airport of Pratica di Mare (RM), the ceremony for the change of ...
378
Read