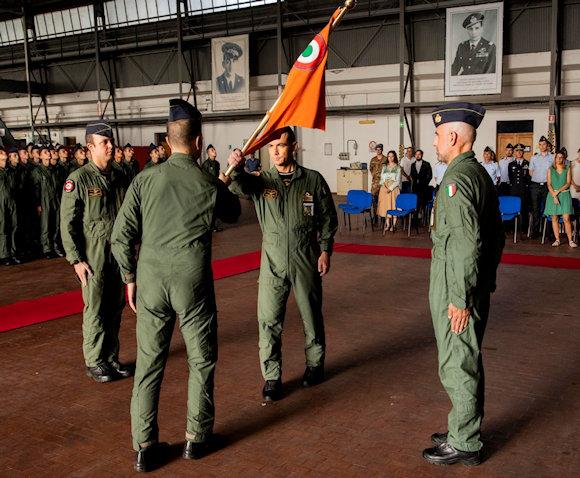 A sober ceremony was the background on Thursday 01 September at the hangar of the Aircraft efficiency group of the "Enrico Comani" military airport of Latina Scalo at the handover between Lieutenant Colonel Damiano T, outgoing commander of the 207th flight group and the major Nicola C. incoming commander.

The event chaired by Colonel Giuseppe Bellomo, commander of the 70th "Giulio Cesare Graziani" flock, saw the participation of a representation of the civil and military personnel of the department, of the students of the 1st class of the regular courses of the Aeronautical Academy, of some family members and guests of the alternating commanders, as well as some former commanders of the 207th flight group, who with their presence wanted to testify to the strong bond that continues to bind the personnel who, over the years, have served in the flock. Strongly and emotionally felt by the entire staff of the flock the presence, as guest of honor of the ceremony, of Mrs. Noemi, widow of the late captain Andrea Adreani, a young Pilot Instructor of the Pontina Flight School, recently passed away after having fought for a long time. time, against a bad evil.

In his farewell speech, the outgoing commander wanted to thank the entire staff of the 207th flight group and the other sections of the flock for the continuous and collaborative support thanks to which it was possible to complete each assigned task. Then addressing the students he wanted to encourage them to do their best since “… Only those who really believe in it and who are willing to go beyond their limits will be able to realize their dream, or perhaps it would be more appropriate to say, they will be able to start their journey, because this is only the beginning. But this is where it all starts! ". 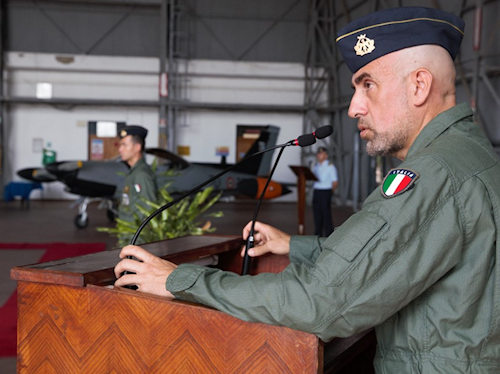 After the handover, which took place with the symbolic exchange of the banner of the 207th flight group and the reading of the recognition formula, the incoming commander in thanking col. Bellomo and the leaders of the Armed Force for the trust placed in him, addressed his greetings and thanks to his predecessor for the profuse commitment and for the total dedication expressed, confirming himself as a valid example to inspire in fulfilling the role of commander of the 207th group flight.

On the sidelines of the event, Colonel Bellomo also expressed words of appreciation and recognition to the outgoing commander for the work done and the competence demonstrated, wishing the successor for the new challenge he is about to face. In particular, addressing the two officers, he stated: "Damiano, in these days of work together I have always seen you looking through the magnifying glass at all the peculiarities and realities of your Group and your men. I can say with conviction that you have been a prominent commander, always animated by those ideals and universal principles that have always been peculiar to our Armed Force. .... Nicola you are preparing to lead the 207th flight group after a consolidated experience as a pilot and commander of the Professional Education Group and in the change with Damiano I see clear elements emerge of continuity and coherence. For you, the path of satisfaction and responsibility begins today with a beautiful climb, we have more than 70 first year students, a very high number that has not been seen for years. Nicola, good luck and welcome on board!"

Particularly touching is the memory dedicated by the three commanders, in the course of their addresses, to their friend and colleague Andrea. To him, to Mrs. Noemi and to little Leonardo, the whole 70th flock wanted to express their closeness by joining in a deep and moving embrace.

Two months after the similar ceremony held in Lecce in Piazza Duomo in the presence of the president of...
2688
Read