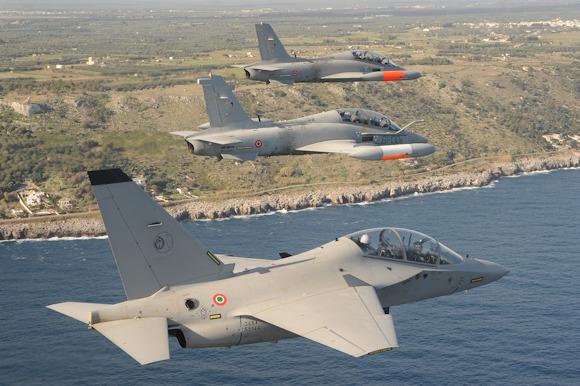 1 December 1995-2020: the 25st flock of Galatina (LE), home of the Air Force flight school, turns 61. The military airport of Galatina was born, as "Campo di Fortuna", on March 31, 1931. Since 46 the base has been used as a flight school but only from December 1, 1995 takes on the name and the organic configuration of a flock, drawing the number "61" from the previous air brigade. Today the 61st flock has more than 200.000 flight hours and nearly 700 military pilot's licenses awarded to Italian and foreign students.

In the last quarter of a century the Salento department has undergone an unstoppable process of growth and change in a modern and international key that has led it to be a world reference point in the field of flight training. A transformation that on the one hand involved the systems supplied, increasingly technologically advanced, on the other hand it touched the same mission assigned to the department, which shifted its center of gravity towards the training of pilots destined for the “fighter” lines. In 2015, the arrival of the first T-346A and the change of the emblem sealed this evolution process. 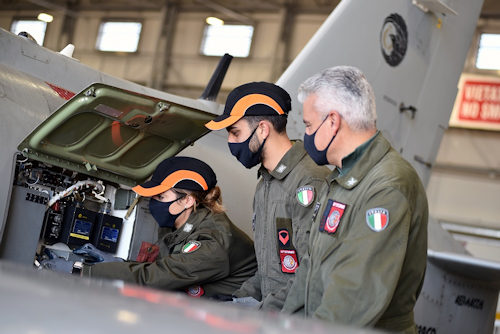 Today the Galatina flight school, dependent on the AM / 3rd Air Region School Command of Bari, provides flight training for the student pilots of the Italian Air Force and the Air Forces of allied / partner countries. Specifically, the Flight School deals with phase II of the training process, aimed at identifying the line on which the student pilots will be employed based on their aptitudes and potential, phase III, aimed exclusively at student pilots selected for the combat aircraft and for the "RPA - Remotely Piloted Aircraft" line and which ends with the achievement of the military pilot license, and finally phase IV, preparatory to subsequent use on aircraft fighter. The T-346A Integrated Training System is used for this last phase.

Colonel Filippo Nannelli, commander of the Wing and of the air base, after having summarized the amount of activity produced in the last 25 years by the Galatina flight school, more than 200.000 flight hours and almost 700 military pilot patents delivered to Italian students and foreigners, he wanted to emphasize how “Regardless of the numbers, what counts is the heart, the passion with which the staff faces their work commitments every day. The results achieved by the 61st flock - Colonel Nannelli continued - they have been possible thanks to the industriousness and enthusiasm of the many men and women who have come and gone over the years. Today we remember, only in a virtual way due to the restrictions due to the health emergency, this anniversary. But what matters is having the opportunity to address a special thought to all those, especially those who have left active service, who have contributed to the current success of this department ".

As part of the continuous innovation process of the 61st Wing, there is the now imminent introduction of the M-345 HET - High Efficiency Trainer, another entirely Italian production aircraft intended to gradually replace the MB339 fleet (in the two versions currently used), in phases II and III of the military pilot training process.

On Thursday 26 May, at the Badoni hangar of the Air Force Historical Museum in Vigna di Valle, the ...
180
Read