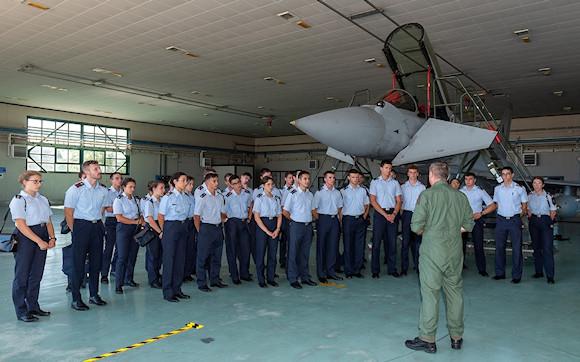 The students of the “Giulio Douhet” Military Aeronautical School of Florence visited the 4th flock of Grosseto to get to know one of the most significant operational realities of the Armed Force up close.

The 4th wing boasts 91 years of uninterrupted activity that make it one of the oldest in the Air Force. For this reason the visit began with the historical archive of the department where, also thanks to the collaboration provided by theAeronautical Weapon Association of Grosseto, the young students in "blue" were shown the history of the department, made up of rich traditions and emblematic relics. The F-104 simulator certainly remains among the major attractions of the archive.

The visit then continued with the IX fighter group, where the new group commander explained to the young students the main mission of the "Marvelous" relating to air defense. In fact, every day the pilots of the IX group train and guarantee the surveillance service of the Italian and NATO airspace. Specifically, from Grosseto the safety of the skies of central and northern Italy as well as Slovenia is ensured on a daily basis, alternating with the 51st flock of Istrana.

Afterwards, the guys from Douhet went to the 20th OCU (Operational Conversion Unit) group, the cradle of training for all pilots. Euro Fighter of the Armed Force as well as future EFA instructors. Thanks to the support of the staff of the group and the Leonardo, the students were able to visit the flight simulators and the equipment room where the equipment supplied to the sailors was shown.

The day ended in the hangar where the young military students were able to appreciate an aircraft up close Euro Fighter. On this occasion, exhibition stands were also created where some professional figures related to flight activity explained to young visitors their work that is carried out every day in the field of weather, intelligence, aircraft armament and maintenance. .

The take-offs of the EFAs, however, are what most fascinated the boys of the "Giulio Douhet" Air Force School who thus ended the visit with a smile on their lips and the enthusiasm on their faces, typical of those who dream of growing up this wonderful and fascinating work to serve one's nation in defense of peace and freedom.

Two months after the similar ceremony held in Lecce in Piazza Duomo in the presence of the president of...
2629
Read

Friday 18 November took place at the Volunteer School of the Air Force of Taranto (SVAM), the ...
248
Read

Thanks to a synergy between the 1st air region command, the Dobbiaco airport branch, the efficiency group...
961
Read

It took place this morning, at the Quirinale, in the presence of the President of the Republic, Sergio Mattarella, ...
881
Read