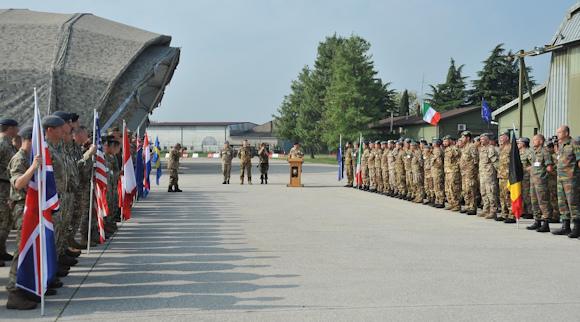 On the notes of the official anthem of the Atlantic Alliance and the "Song of the Italians" the opening ceremony of the NATO exercise called Toxic Trip 2019 (TT19) which, having reached the 26 ^ edition, will be hosted at the Villafranca airbase, home of the 3 ° Stormo of the Italian Air Force (AM), bringing together international experts from the Chemical, Biological, Radiological and Nuclear (CBRN) sector.

An event with a simple but meaningful ritual for the approximately 800 participants - of which half came from 12 countries NATO and 3 partner countries - to which Italy takes part with specialists from the AM and the Italian Army (EI): all together they will be able to confront and improve themselves in the management of means, materials and procedures in the field of CBRN Defense of an aeronautical installation that, in case of emergency, can be usefully employed in favor of the community, such as in the event of an accident at the site industrial or petrochemical plant.

To officially start was Colonel Francesco De Simone, commander of the 3 ° Stormo, to whom the custom has entrusted this task as Host Base Commander; next to him, in the ceremony organized in the operative area of ​​the Caluri base, also Lieutenant Colonel Luigi Mancino, chairman of the TT19 Working Team in the framework of the NATO Joint CBRN Capability Defense Group, and the 1 Lieutenant Antonio Meola, president of the non-commissioned officers, graduates and troops of the 3 ° Stormo.

"With the conclusion of the stages of preparation and amalgamation between the various contingents, the exercise enters the so-called live phase. - said Colonel De Simone addressing the personnel deployed with the heads of delegation and the respective national flags, expressing satisfaction in hosting the most important exercise ever in the sector at the 3 ° Stormo, for the third time in less than ten years CBRN by number of participants, assets and technology used.

In the year in which the 70 anniversary of the Atlantic Pact occurs - added Colonel De Simone - this exercise will demonstrate once again that NATO is always ready and able to defend allies and partners from CBRN threats ".

One of the main features of this TT19 edition will be respect for the environment. In fact, during the exercise, contrary to what the term "Toxic" might suggest, only non-harmful sanitizing substances, normally available on the market, will be used, as concrete evidence of the importance and commitment that the AM reserves for the theme of Environmental Protection; a special urban waste disposal management plan was also implemented, which also envisages the use of compostable material and compactors for plastic and paper.

But the TT19 also represents an opportunity to promote "Made in Italy" through the organization of cultural visits that will allow foreign staff to learn about the artistic and scenic beauty of the area and appreciate the welcome offered by the province of Verona.

The change of command of the Experimental and Shooting Standardization Department took place on Thursday 9 July 2020 ...
1723
Read

An Air Force C-130J aircraft made two flights to Ukraine to bring aid to the populations ...
319
Read