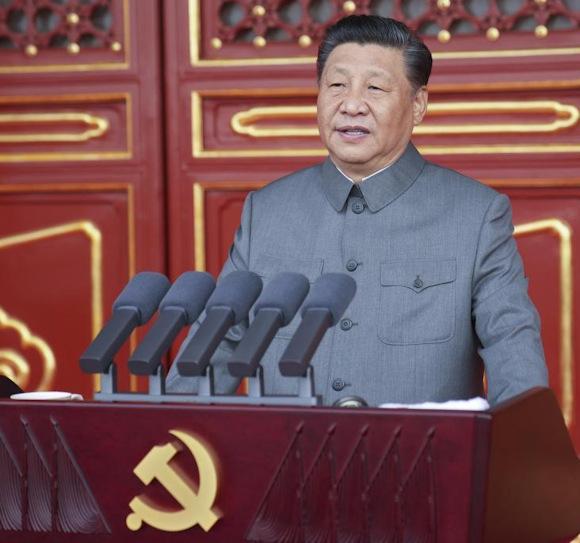 The facts are enough to show that the ceremony of 1 July in Tiananmen Square to celebrate the XNUMXth anniversary of the Chinese Communist Party should not be read exclusively as the icy staging of a tyrant in power, but rather as the triumph for a return to the stage. world.

A return in style, no doubt about it, as befits a nation that already perceives itself as a global superpower.

Today China is the second largest economy in the world, the first if we consider purchasing power parity; it ranks first in terms of the number of patents in the field of artificial intelligence (68.720 in 2020 against 59.230 in the US) and is the world's leading creditor and investor.

It also has a growing middle class, equal to a quarter of the world class.

La Middle-earth it is also the second country for military spending and has the first commercial fleet on the planet, in addition to the most important shipbuilding: from 2014 to 2018 it increased the tonnage of its navy by a value equal to that of the Royal Navy British.

We could continue by citing the GDP per capita, now equal to that of Russia (€ 13.000), quintupled in less than 15 years, or the life expectancy that rose to 75 years, when only in the 70s people were still dying of hunger, to show that behind the words of the current "Helmsman" there was not empty rhetoric, but the legitimate pride of a country that returns as a protagonist.

On the other hand, in the last two millennia, with the exception of the nineteenth and twentieth centuries, it has always been a protagonist, and, even at the end of the eighteenth century, China produced a quarter of world GDP.

Xi Jinping's words mainly highlighted a sense of revenge and the ill-concealed pride of those who at that moment greatly contributed to making it possible. This new China Xi has built it piece by piece, in strong continuity with its predecessors, as evidenced by Mao's dress worn for the occasion. The man, on the other hand, is profoundly conservative, also because he is the son of one of the generals who made the long march with Mao. 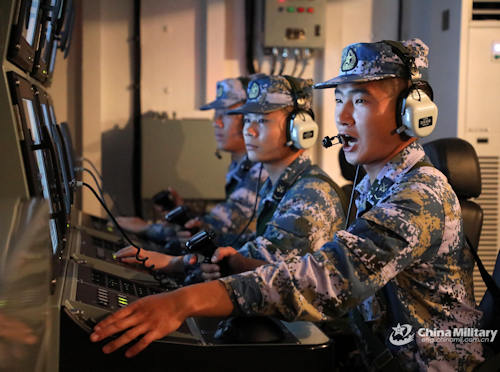 From the moment of his inauguration, he strengthened the party to avoid the fate of the Soviet party, he promoted orthodoxy to the Marxist precepts and loyalty to the directives received.

Finally, it imposed an iron internal discipline, with an articulated fight against corruption that did not spare high civil and military offices.

I am not satisfied with the successes collected internally, it has been able to exploit the systemic weaknesses of the West.

In terms of governance, preferring bilateral relations with states (this was also seen in Italy with the signing of the memorandum of accession to the Silk Road) to those, more complex, with supranational bodies (EU, ASEAN).

On the economic side, exploiting the status of a developing country, with a shrewd use of dumping, neglecting the respect of the rules that membership in the World Trade Organization (WTO) would have entailed.

It must be said that all of this it was obtained with the substantial endorsement of the West, according to a tacit agreement that in exchange for secure earnings and access to a market of over one billion and four hundred million consumers, has entrusted China with the lowest jobs in the global value chains, the least sustainable ones, with the idea that the slow economic recovery would direct it towards an inevitable democratic transition. Quite the opposite of what happened.

The factory of the world, little by little, has taken hold of higher and higher levels of those same value chains, and taking advantage of the competitive advantages offered by the abundance of cheap labor and a weak enough currency, within a few years it outlasted the competition of those who intended to harness it.

Who would never have thought that to the Western (American) certainties regarding the combination of democracy and economic growth, Beijing would have instead opposed those of a strong economic dirigisme, expression of an equally important democratic centralism. 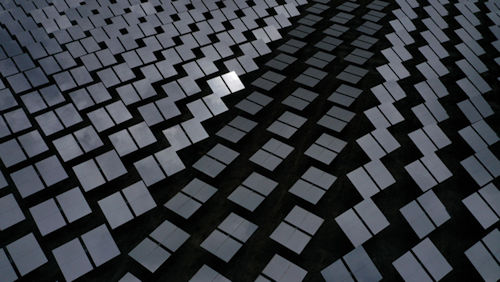 China thus acquired the know how necessary to become more and more autonomous, to the point that today the much-mentioned energy transition speaks almost exclusively of Chinese. Not only for raw materials (rare metals) whose production and marketing is 90% in the hands of Beijing, but also for the technologies connected to it (solar panels, wind turbines, batteries).

Xi Jinping has also impressed great speed in the military field, with the strengthening and modernization of the armed forces, gravitating above all to the maritime and space domains.

Do not confuse the SIPRI data1 which assign Beijing the 2nd place in the world in 2020, for defense spending. Those 2522 billions, equal to 20% of the US budget, already significant in itself, at purchasing power parity are equivalent to 80% of what Washington spends each year on armaments. A huge sum, even more so if we consider that it is invested not to support a global instrument as in the American case, but one whose projection is still exquisitely regional.

Which brings us to what for Beijing, at the moment, is still the main theater of confrontation: the South and East China Sea, with attention to the mirror of sea that divides it from Taiwan, the rebel island, whose destiny it is sadly linked to the US will, still to be verified, to defend it at any cost, including that of fighting a potentially nuclear war.

At this point, we would not be entirely intellectually honest if we translated our inability to fully understand the dynamics of China with a (both forced and empty) moral condemnation of the authoritarianism and political tyranny they express. 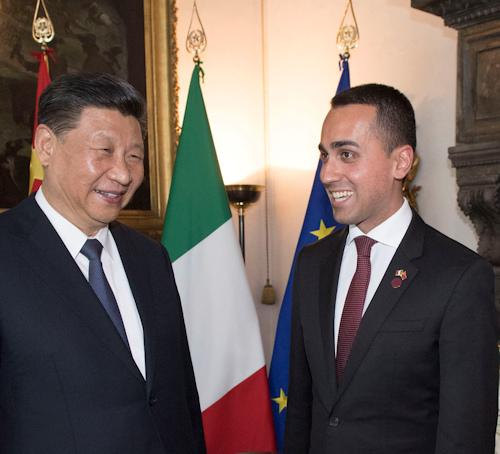 It would only serve to cleanse our conscience, even more so that of the ruling classes we have elected, who have not been able (or wanted) to fully understand what was happening in that country, even ending up accelerating the results.

Even today, in fact, we continue to judge Chinese events with our categories, values ​​and principles, convinced that they are recognized by all as universal.

And we are unaware that, although a Communist for a century, China has been Confucian for much longer: for over 25 centuries.

This observation alone would have been enough to understand that any policy of renewal and redemption of that country was destined to take the direction we observe today.

In other words, political authoritarianism and economic dirigisme on the one hand, and a system of internal security less and less respectful of human rights on the other, are the plastic transfiguration of the concept of Confucian order, based in turn on the principle of hierarchy, and therefore of authority, embodied today by the Party (in the past by the Emperor).

In this social and political structure, everyone is called to stay in their place, respecting their assigned roles and tasks, offering unconditional loyalty to the established power, whatever it may be.

It is not surprising, in this perspective, that the refoundation of Xi Jinping started from the cultural roots of the country, invigorating its never dormant nationalism and promoting a new patriotism that feeds on redemption for the humiliations suffered and pride for the successes achieved.

The history and culture of China today lend themselves perfectly to the work of internal legitimation of power and to keep the country firm and united.

Just as the Marxist creed - the framework within which everything takes shape - lends itself to Xi revitalized as ever, with its rigid rituals designed to provide the state with a ceremonial and a narrative, which immerse China in the current historical process. 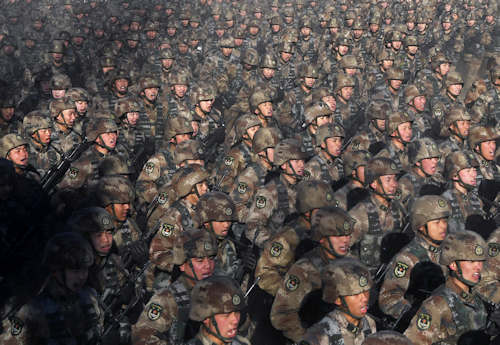 Confucian philosophy and Marxist ideology are therefore the tools with which the CCP secretary is shaping his China, promoting its model in competition with the Western one.

Primacy of the masses over the individual, democratic centralism versus democracy.

The biggest task he has set himself is probably to demonstrate that the Chinese social pact works all right, and is exportable to all countries, not just those that no longer intend to comply with the rules of the current English-speaking international order.

Many of them will be convinced by the huge amount of money that China is ready to pay, and by the low conditionality required to obtain it.

Others will be due to cultural closeness, or just because they have forewarned that the wind has changed.

With the Tiananmen Square scenography, and the announced "irreversibility of the Chinese Renaissance", Xi Jinping has not only indicated to the world that China is back, but that it is ready to take the lead of a new community of nations, ready to affirm, once and for all, a new international order, this time based on foundations that they look to the East.

Photo: Ministry of National Defense of the People's Republic of China / Xinhua / presidency of the council of ministers 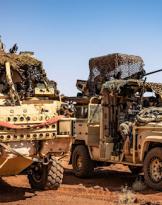 The then Minister of the French Armed Forces, Florence Parly, about three years ago had "invited" European countries to ...
442
Read

A Pakistani court has summoned the heads of all past and current governments, including the former military governor ...
748
Read

The experience gained on the ground, in the last two decades, by the Italian military personnel engaged in the missions ...
12988
Read

After the decommissioning of the M551 Sheridan tank, which took place in the mid-90s of the last century, the US Army ...
16434
Read

The director of the Kredmash mechanical plant in Kremenchuk would have confirmed (source Komsomol'skaja Pravda) that ...
7885
Read

For a long time, Difesa Online has emphasized the importance of acquiring (and maintaining) artillery pieces, monotube and ...
22773
Read

British Army Chief of Staff Sir Patrick Sanders says the invasion of Ukraine by the ...
12859
Read