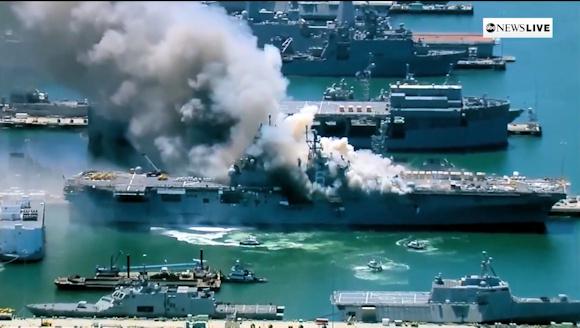 The US Navy has reported a "terrible tragedy aboard the USS Bonhomme Richard (LHD 6) when a fire broke out while docked in the port of San Diego. "

A total of 21 people (17 sailors and four civilians) reported non-lethal injuries (burns and poisoning) and were transported to hospital. The response of the rescue (local, base and on board) would have been "rapid and immediate". From the first news the fire would have broken out following an explosion.

The USS Bonhomme Richard, entered service in 1998, it is the sixth amphibious assault ship belonging to the class Wasp. In service the unit counts on a crew of 1000 sailors who can add up to 2000 marines. At the time of the accident it was under maintenance and 160 people were on board.

During the last world war, the Italian state abandoned thousands of ascari (Eritrean fighters) who ...
37
Read

The head of naval operations, the adm. Mike Gilday and members of the United States Congress, during the Symposium ...
1502
Read

What will the submarines of the third millennium be like? A project of ...
4478
Read