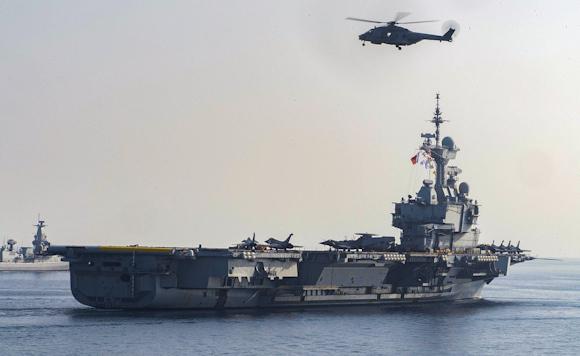 In the course of operational deployment Clemenceau 21 (which will affect the Mediterranean, the Red Sea, the Persian Gulf and the Indian Ocean), the nuclear aircraft carrier of the Marine Nationale Charles de Gaulle (photo) served as the command ship of the US Navy Task Force 50, welcoming units of the class to its team Burke, like the destroyer Thomas Hudner. The de Gaulle, with its naval escort units, also took part in the exercise Gallic Strike in the Mediterranean Sea, together with the Royal Navy aircraft carrier HMS Queen Elisabeth, which embarked the STOVL F-35B aircraft of the United States Marine Corps and was escorted by other destroyers of the class Burke.

This cooperation demonstrates how close the relations are between the three Marines which, in the Western field, are the most powerful in the world (the so-called "Blue water"). In fact, on the sidelines of the exercise Gallic Strike, a trilateral agreement between the US Navy, the Royal Navy and the Marine Nationale was signed on 3 June in Toulon.

Their respective Chiefs of Staff, Admirals Gilday, Radakin and Vandier, have reaffirmed the bonds that have united the three Marines for more than a century, as well as their commitment to jointly defend a system of international relations that guarantees and supports security. and the prosperity of the United States, the United Kingdom and France.

In the signed Agreement it is emphasized how “Our naval power is enhanced by the integration of marines that have the same objectives. Together, we are committed to addressing the challenges posed by an increasingly uncertain world. Even during the pandemic, we have improved our interoperability [...] as well as our knowledge of the maritime domain by carrying out operations across the full spectrum of naval functions in support of NATO ".

The purpose of the Memorandum of Understanding is to strengthen the partnership between the three Marines in order to "keep the oceans open and free, while continuing to work together to expand the reach and capabilities of our Marines around the world".

For Admiral Pierre Vandier, French Chief of Staff, the Marine Nationale, the US Navy and the Royal Navy "they must be ready to intervene together in conflicts of varying intensity, all over the world", especially because "the common challenges will entail the need to face increasingly lethal threats". So, he continued, "our training and exercises reflect this reality and ensure that we are able to operate together at the highest level".

After the decommissioning of the M551 Sheridan tank, which took place in the mid-90s of the last century, the US Army ...
1148
Read

The director of the Kredmash mechanical plant in Kremenchuk would have confirmed (source Komsomol'skaja Pravda) that ...
4367
Read

For a long time, Difesa Online has emphasized the importance of acquiring (and maintaining) artillery pieces, monotube and ...
21562
Read

British Army Chief of Staff Sir Patrick Sanders says the invasion of Ukraine by the ...
11546
Read

During the last world war the Panzerkampfwagen V Panther, having solved the initial mechanical problems, was ...
26798
Read