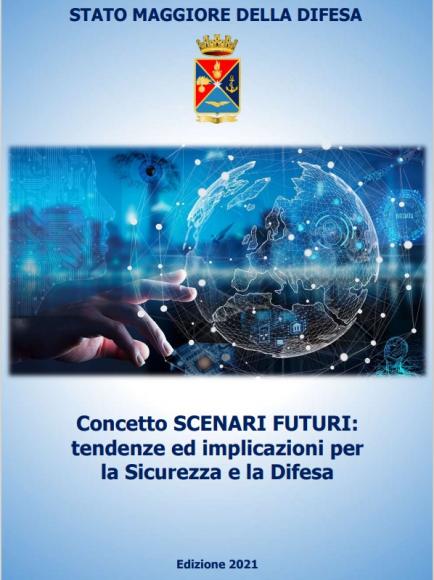 With this title, a few months ago, the document came out which, born from the application of the so-called Open Innovation, has the task of better understanding the future in order to project the Military Instrument into it. The concept is, in fact, the result of the collaboration of the "innovators" of the Defense Innovation Center, the Armed Forces, the General Command of the Carabinieri, the General Secretariat of Defense, the Interoperable Summit Operations Command and civil experts from the academic, industrial and research world certified to the network of INNOV @ DEFENSE.

It goes without saying that Italy is not the only country trying to understand what could happen in the near future, a thought activity necessary to try to guide the development of future capacities (better known as strategic foresight), all the big ones do. villages. In a previous article from the end of 2019 I had dealt with French activities in this sense and given a historical overview that can be useful to recall. The same thing happens in the cyber environment where the European Union Agency for Network and Information Security (ENISA), some time ago, had done a similar exercise.

But let's try to understand how the document is structured and what are the main trends for the 2040 horizon.

The document is very streamlined and is divided into four chapters that reflect the analysis carried out by thematic areas (political, socio-economic, technological and climatic-environmental), preceded by a brief introduction and followed by conclusions and some summary annexes. It should be noted that each chapter is closed by the analysis of the guidelines to be pursued in the Security and Defense field to address emerging trends.

The first chapter deals with the future geopolitical scenario (2040+) and highlights how it will be characterized by profound changes compared to what we see today and by recurrent instability, high dynamism and unpredictability. Competition for access to valuable resources, for quantity or quality, in which international players will act in an unscrupulous way is increasing. According to scholars, the fundamental trait of the geopolitical framework sees the renewed competition between the great powers and the questioning of the Order constituted mainly by Russia and China and by some regional state actors such as Iran and North Korea, but also by international terrorist groups such as Al-Qaida or the Islamic State. In all this, Europe does not seem capable of playing an independent role, too committed to overcoming internal challenges and its sometimes unclear decision-making dynamics towards the outside, not to mention the migratory phenomena that will affect it, especially from South.

The second chapter deals with the socio-economic scenario. First of all, there is the demographic growth that affects different parts of the world, certainly Africa. As a consequence of the increase in the world population and the ongoing climate changes there is the phenomenon of immigration with the consequent challenges in social, economic, environmental and security terms. Environmental sustainability has become increasingly important. Population growth and technological development will require more and more resources, which will be even more contested.

The third chapter examines the trends in technology. The military world, like the rest of society, is deeply affected by technological developments and influence on society. One of the main problems is to be found in the speed of innovation, a speed that does not allow man to adapt in a balanced way. Among the new technologies, in particular, disruptive technologies are those that create pressures that are difficult to predict and not very controllable. All this will have strong cultural and social influences that will certainly have strong repercussions on the geopolitical and stability equilibrium. Among the new technologies, the most anticipated developments are in the field of Artificial Intelligence, nanotechnologies, hyper-speed, new materials, quantum technology and robots and autonomous systems, not to mention the developments of space and cyberspace. All developments are closely linked to the so-called technological sovereignty, an issue increasingly perceived as vital by all parties in the field.

The fourth and last chapter allows us to understand how the environment around us is increasingly important and unstable. The natural environment is increasingly subject to the stress factor called "Man". Global warming, sea level rise, increase (in number and power) of "extreme" atmospheric and natural phenomena, reduction of biodiversity, are increasingly attributable to the influence of our species.

The conclusions try to harmonize what is presented in the work and to trace the possible development trajectories, taking into account the interdependencies between the different sectors and the high instability that seems to characterize our age and the near future. According to scholars, the international geopolitical scenario with a horizon of 2040 will be characterized by instability, dynamism, unpredictability, crises and conflicts with very blurred outlines and profound changes in every sector. The growth of economic and social tensions (ethnic, religious and national) will continue and new ethical-value structures will try to take the place of the current ones, in this clash between the new and the old often efforts will be made to preserve national values. Climate change will affect the production of resources, and at the same time we will see an increase in demand also due to the general population growth. Competition for access to the planet's precious resources (food, water, energy and raw materials) will increase. Space and Cyberspace become more accessible and a field of clashes between old and new actors.

Ultimately, the world of 2040 seems to be much more fragile and less secure than the current one.

Of course, as you can imagine, this article is not intended to be exhaustive in any way but simply wants to be a stimulus to deepen a little known yet very important field of study. We will therefore try to investigate some sectors together, also trying to make our contribution.

- France, Red Team: how to build the future - Online Defense

For a long time, Difesa Online has emphasized the importance of acquiring (and maintaining) artillery pieces, monotube and ...
8286
Read

British Army Chief of Staff Sir Patrick Sanders says the invasion of Ukraine by the ...
7325
Read

During the last world war the Panzerkampfwagen V Panther, having solved the initial mechanical problems, was ...
25347
Read

The conflict in Ukraine has "distracted" the magazine in recent months from continuing to deal with issues relating to the ...
6854
Read

A few weeks ago we mentioned how serious games (and among them war games) can help to understand ...
1796
Read