Safety and epidemic emergencies: new transformation for the Atlantic Alliance? 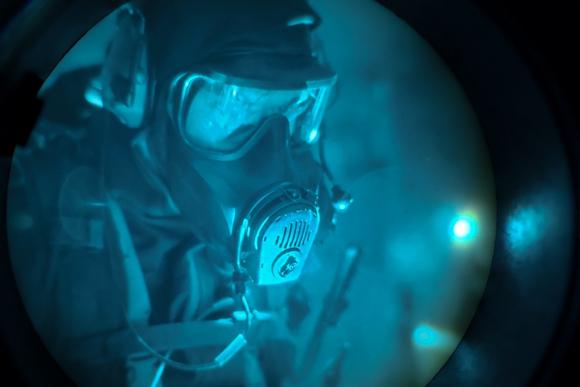 The Cold War had accustomed us to fear above all of a type of weapon of mass destruction: the nuclear one. After thirty years the greatest risk seems to come from another of the three main NBC weapons (nuclear, biological, chemical) even if not used by any enemy but produced by ourselves: the biological one. To date, NATO and the armed forces of the Allies (let alone the armies of the rest of the world) still do not have adequate tools to deal with epidemic emergencies and biological wars such as the current one.

The Coronavirus crisis has demonstrated the fragility of security systems but also national and regional socio-political-economic systems (primarily the European Union) due to the seriousness of the unprecedented threat, but also to the lack of forecasting skills and clear, concrete and effective strategic visions. Future biological threats, natural like the present one or even artificial in the case of a predetermined attack that uses viruses as weapons, will be faster, more disruptive and without borders, and therefore a joint effort by the Alliance will be needed.

In the past 20 years we have had on the planet three Severe Acute Respiratory Syndromes from Coronavirus SARS-Cov in 2003, the MERS in 2012, and this SARS-CoV-2, two pandemics, the 2009 Swine Flu and the current Coronavirus. However, only the latter had a high transmission of inter-human contagion which created the current situation unprecedented in the history of humanity, also given the level of complex interconnection reached with modern globalization.

How many years do we have to wait for the next pandemic? Not necessarily a decade because the events of "Black Swan"1 they are increasingly unpredictable and immediate in today's world. And what transmission rate could, and above all, what level of mortality the next pandemic? Like the two SARS (around 10%) the MERS (35%) or even greater? We don't know but we should prepare for the worst-case scenarios. Pandora's box has been opened and we don't know what awaits us in the future. 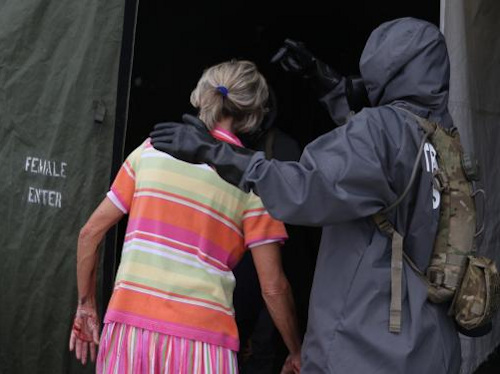 The role of the armed forces could meet the commitments of civil institutions in the event of serious crises like this, also thanks to the area of ​​Civil-Military cooperation. Since the end of the Cold War, NATO has adapted to new threats and new international balances and above all has expanded its strategic concept to others two pillars apart from deterrence and defense: the cooperative security and crisis management. For the first he opened channels of cooperation among others with the Mediterranean countries (Mediterranean Dialogue) with the Gulf countries (Istanbul Cooperation Initiative) and with the African Union. For the latter, he mainly carried out operations in the Balkans.

But how can we do today to apply these two new spheres of action to an invisible, changeable and extremely fast enemy that cannot be eliminated with the use of violence? The fundamental role of the military is to bring order out of chaos but this is not necessarily achieved by force (some Italian analysts have begun to remember finally the social importance of the military instrument).

NATO could therefore play a crucial role in guaranteeing "human security", as well as defending national security, if it had adequate tools available: the 2% defense spending promised by each country could also be used for these crises. But these are primarily political decisions.

Many do not know that NATO is a political-military alliance, that is political cooperation is as important as military cooperation, and obviously precedes it in terms of time. So political coordination between the 29 states, with the US in the front row, could give the Alliance a new boost, three decades after the end of Bipolarism. 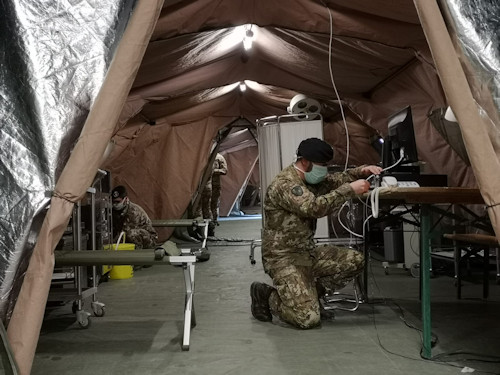 Some analysts, such as the president of the Atlantic Council, have even suggested the activation of Art. 5 as after 11/XNUMX, in order to give the leadership and cohesion necessary to fight a threat like this. But regardless of this possibility what are the innovative roles and strategies that the Alliance should adopt in the face of biological challenges like this or even worse in the future, which could jeopardize the very existence of our modern civilization and survival of our species?

The first important task of an alliance like NATO is to carry out joint defense coordination action. Crisis such as that of the Coronavirus, which can create social, economic, political and geopolitical upheavals, will in fact increasingly need international, regional and global cooperation first. Even if initially there may be nationalistic and populist regurgitations in the long run, states alone would not be able to respond to the needs of a globalized, complex and therefore fragile population and territory. Therefore NATO as an Alliance role should first of all guarantee a common response model, in collaboration of course with political institutions, primarily the European Union, to give immediate answers and secure countries. And then think of greater cooperative security at a global level, because viruses have no borders, both by collaborating with the United Nations and possibly with the G20, to have a truly planetary action supported by the major economic powers.

The second role would be that of cooperation between the civil and military world. An extraordinary effort is already being made in Italy, with the commitment of the Armed Forces to help public institutions in various ways, not only with transport logistics and communications, but with the skills of the Military Health Service and those of the Corps of Engineers (for example recently in helping manufacturers of respirators). But that's not enough, it also takes a plan for national civil defense, in which armies collaborate with civil institutions, for the development of a capacity for national and individual resilience. 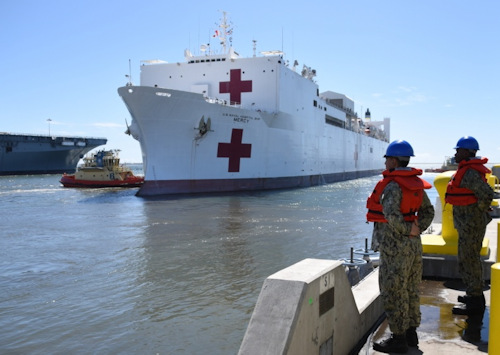 An activity of protection and assistance to civilians in situations of extreme emergency, following the principles of prevention, damage reduction, resilience and recovery, it is different from the Civil Defense, and has never really been realized (although the nuclear risk has always taken it into consideration). NATO also knows that civil resilience is the first defense line and therefore it could increase its collaboration with civil institutions to ensure the continuity of government services, energy sources, food and water resources, transport and communication systems etc. in the event of serious crises. to then help the defenseless population wherever possible.

There are many examples that can be followed, first of all the US army that in Africa for the Ebola crisis coordinated with NGOs such as Doctors Without Borders or the Red Cross, using hospital ships such as the Comfort and Mercy (currently used for the crisis in New York and Los Angeles) by preparing the immediate construction of field hospitals and using other means and operational tools of civil-military cooperation.

NATO could also have a decisive role to play s, to help manage the crisis and control the extent of an infection. Reconnaissance aircraft are already used in the civil sector, for example for the monitoring of the territory with the control of human traffic and illegal immigration, or for rescue operations from natural disasters, but we should use more remotely piloted aircraft, that is, the drones. 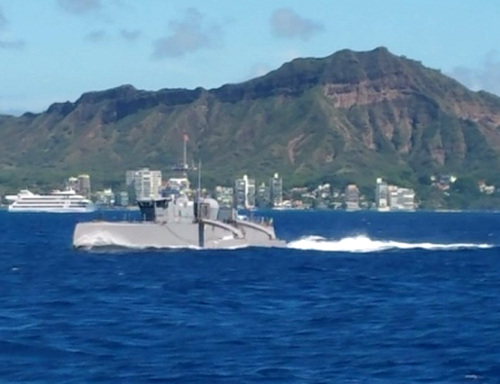 The United States makes increasing use of these even with drone ships (photo) for naval observation of their continent, so as to maintain operations constantly even in emergency situations. NATO does not yet have such ships but it is currently developing the reconnaissance system Alliance Ground Surveillance (AGS) with 15 countries included in the project and five NATO RQ-4D remotely piloted aircraft (the operational base will be Sigonella). This could be an area of ​​industrial and technological development to which to devote in the future also with significant economic consequences.

Finally, the strengthening role of NATO in the event of biological and pandemic crises would also go in the direction of defending against hybrid, cybernetic and propaganda attacks by non-state actors (such as terrorist or criminal groups) and Great Powers Competition of China and Russia. These two countries in particular are taking advantage of the current crisis with their own Sharp Power e Soft Power sending aid and attempting to weaken and divide Europe and the Atlantic alliance (with representatives of European countries already starting to criticize the EU's inaction and praise Asian aid).

In short, NATO can and must continue its transformation and increase its role as a key player in crisis management and cooperative security.

We don't know how this crisis will end but one thing is certain, the lessons learned will be many and the world will never be the same again. Nor is the role of the military and an alliance like NATO.

1 Black Swan events (according to a theory by the Libanse-American philosopher Nassim Nicholas Taleb) are events of great impact, difficult to predict and very rare, whose probability is impossible to calculate.

The American military device, in recent years, is undergoing a profound restructuring in order to face ...
1725
Read

The fast multi-role vessel Project 02510 entered service on November 24 with the Baltic Fleet of the ...
1950
Read

The IRINI mission - launched last year by the European Union to support the UN embargo, aimed at blocking the ...
3489
Read