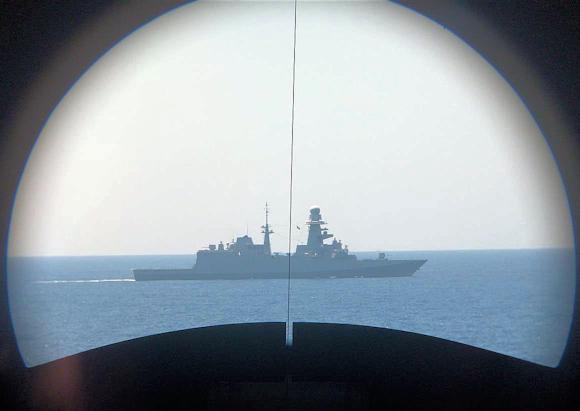 144 meters in length, 19,7 meters in width and a displacement at full load of 6700 tons. These are the numbers of the frigate "Antonio Marceglia" launched in Riva-Trigoso, from the name of the captain of the Naval Engineers raider of the Xa Flotilla Mas, gold medal for military valor who participated in 1941 to an action against the port of Alexandria Egypt putting out of action or sinking two British battleships, a tanker and a destroyer. This is the eighth unit in ten of the Italian-French Fremm program. In recent weeks the frigate symbolically moved a few meters with the greeting of applause, sirens and the anthem of Italy. The ship will be delivered to the 2019.

The "Antonio Marceglia" frigate can reach one speed of about 27 nodes with a maximum capacity of personnel transported equal to 200 people. The propulsion system of the Marceglia, of type CODLAG, It consists of one gas turbine, two reversible electric motors and four diesel generators. The Unit is able to travel between the 5000 and the 7000 miles depending on the speed. The energy produced on board, the propulsion and all the control systems are governed by an integrated platform management system.

Il FREMM program, conceived after the interruption of the program Horizon, after only two units acquired from Italy, it was born from the need to renew the line of the Navy units of the class Wolf (already shaved) e Mistral (close to the achievement of the operating life limit), built by Fincantieri in the seventies. 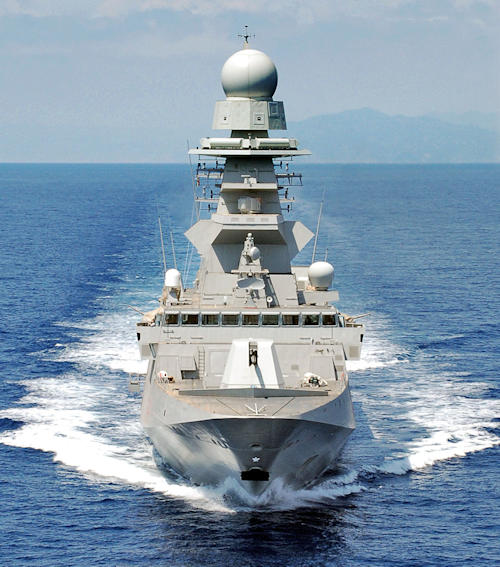 In the 2013 we were handed the "Carlo Bergamini" and the "Virginio Fasan", in 2014 the "Carlo Margottini", in 2015 the "policeman" in 2016 l ' "Alpine" and 2017 the "Luigi Rizzo". With the exercise of the option, in April 2015, for the construction of the ninth and tenth units, whose delivery is expected after the 2020, it was given complete implementation of the Italian FREMM program.

It was not easy to overcome the resistance of the General Staff of Defense who wanted to stop the program at the 6 ^ Nave. The catchment area for the FREMM is the same as the Army Armored programs. At first it seemed like a good idea. The Navy leaders felt that having a joint funding with the Army would have been easier to bring the program to fruition.

With the rotation of Admiral Binelli with the general of the Alpine Graziano, things changed radically. Despite the adm. Binelli before leaving the post of Chief of Staff of the Defense had approved the option for the 7 ^ and the 8 ^ frigate I had to fight strongly so as not to interrupt the program. Even more challenging was the situation in the following year, when the 9 ^ and 10 ^ unit was run and I do not deny that the metalworkers' unions, the UIL and the CGL were effectively at the forefront, with threats of strikes and stakes at construction sites, to convince Ministra Pinotti to overcome the internal resistance of its Ministry.

The FREMM program sees participation as a prime contractor for Italy, of Orizzonte Sistemi Navali (51% Fincantieri, 49% Leonardo) and for France of Armaris (Naval Group + Thales). This cooperation follows the experience of the previous Italian-French "Orizzonte" program that led to the creation of two destroyers for the Italian Navy: the "Andrea Doria" and the "Caio Duilio", very valid ships that unfortunately we did not build in largest number. 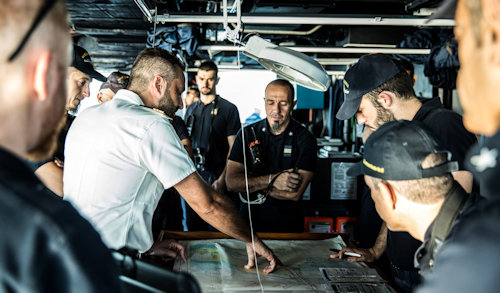 The requirement of Italian FREMM has been modified over the years, even significantly, to adapt it to changing operational needs. The crew was increased from 116 units, assumed from the initial studies of 2005, 170 to about today, to which must be added the flight components, leading the table at about 190 / 195 people. The available beds have consequently passed from about 140 to 200. Other aspects have been modified, for example the side filling station has been doubled, initially foreseen on one side only, the A / A missiles have been planned Aster 30 and not just the Aster 15 of the initial requirement, others will be modified in the future to keep ships updated.

It should also be remembered that the Italian Navy had a very different requirement from the French one. The Italian project had been called NFG (Nuova Fregata Veloce). This is why the Italian FREMM differs greatly from the French (he has one more bridge, for example), embarks two helicopters instead of just one and a missile defense area (able to protect other ships from air attacks - rockets Aster) and not just point (able to protect only itself).

Some of our FREMMs are equipped with the excellent anti-aircraft and anti-ship gun from 127 mm by Oto Melara (photo) and not just with 76 mm. The French anti-ship missiles are the Exocet and not i Teseo Italian. The mission software and the radars are of Italian production. Also the on-board systems are in many different cases. 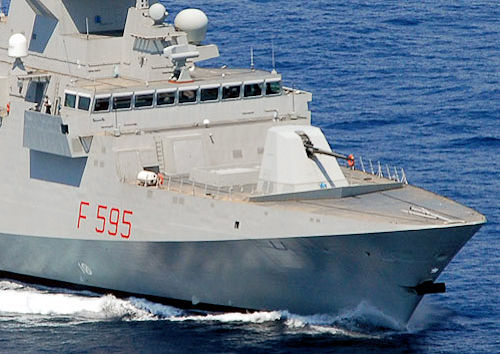 These differences in requirements derive directly from the different overall composition of the respective fleets. The French one, based as cornerstones on nuclear submarines and on a powerful aviation Navy boarded and floor mounted, aimed to "stationary" ships, armed with cruise missiles (the Italian version does not include them), to maintain the open of ' West and East Africa ready to support France's foreign policy in its former overseas territories, rather than polyvalent frigates. Hence the choice for an economic vessel (at least in initial intentions) of long range and reduced crew. Speed ​​was not a priority requirement. The FREMM is indeed rather slow, especially in diesel.

To escort the Cavour or fast merchants like the Ro-Ro / Container ships, must operate in the turbine, agreeing to replenish more frequently, Italy had the need for a multi-mission Frigate, fast, well armed, able to form the backbone of the fleet within multi-task task groups, centered on the only Major Unit with air capacity in line in our Navy (yesterday the Garibaldi, today the Cavour). Also for this reason, the addition of the new Multipurpose Units will be particularly appreciated by the Fleet, as with their high speed (> 31 knots) and highly advanced operating characteristics, they will effectively complement / integrate the FREMMs.

But if the Italian FREMMs are so different from those of the Marine Nationale, why do them with the French?

For political reasons, to have the funds to build new ships, at a time when investing in Defense programs was almost unthinkable. The proposal to build ships with the French gave the program that European "aroma" of which the pro-tempore government, we speak of the early years 2000, needed to win parliamentary hostility to military investment, even if the international cooperation programs they have the defect of costing more and extending much over time, compared to national ones.

That's why we participated in the program with France and because our FREMM is so different from the French one.

The Biden Administration continues to supply the Ukrainians with artillery. After the 155 mm M-777 howitzers and, news ...
9856
Read

As previously written, among the supplies of armaments sent by the Italian government, there are also howitzers / ...
71952
Read

To circumvent the limitations imposed by Congress, the Biden Administration employs its allies to provide ...
19651
Read

No war can be interpreted and explained through the "absolute" and necessarily abstracting lenses of ...
4682
Read

If it weren't serious, it would even be comical. People don't realize the significance and implications that ...
19765
Read

Reuters reports that the United States will provide Ukrainians with long-range anti-ship missiles. If that were to ...
46237
Read

One of the modern fields of study related to learning is the one known as "serious games". Let's start right away ...
2498
Read

Last month we witnessed the sinking of one or more Ukrainian Neptune anti-ship missiles in the Black Sea ...
37661
Read

The Russian Airborne Forces (Vozdushno-Desantnye Voyska rossii - VDV) - like the vaunted Spetsnaz, by the way ...
29774
Read

The supplies of military equipment by NATO and European countries to fighters continue in these days ...
27639
Read