Home Military world Radio Prora The Navy must resume its ... 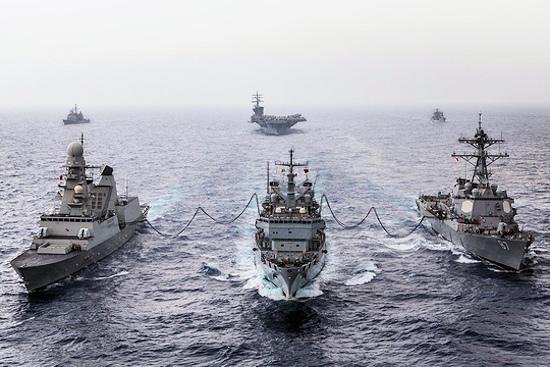 In the 2012 / 2016 period the Navy had assumed a role of leader for the protection of the environment, designing new classes of ships equipped with advanced systems for containing harmful emissions and experimenting / adopting, on a growing number of ships in the fleet, mixtures of green gas oil produced from vegetable oils and in perspective from microalgae. In the 2016 this impulse died down, putting at risk the investments and the experience put in place in the previous years.

Now it's time to reverse course. It is time for the Navy to start again in this sector, with courage, for the good of the country, in the awareness of the role of the sea for Italy's prosperity and security. We must have the courage to act today, even if the effects will be seen when those who made these decisions will not benefit directly.

The climatic upheaval not only determines the loss of ecosystems to the detriment of wildlife, which is very serious in itself, but can also affect social stability and therefore the peace of the regions most affected by its consequences. Just think of the tensions for the control of water resources that would be lost with the invasion of aquifers by sea water to raise the average sea level, as well as the loss of valuable coastal territory (eg Venice and the coastal lands of the upper Adriatic, etc.). 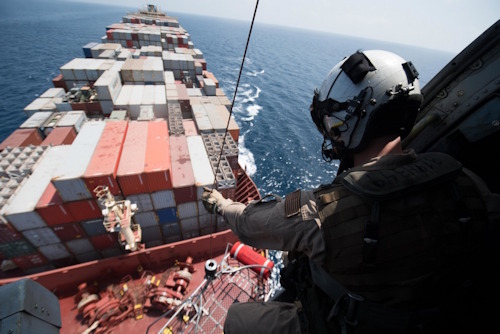 Among the threats that we will face in the medium term (there is talk of serious effects already noticeable in 2050) there are undoubtedly the consequences of global warming for the uncontrolled growth of levels of CO2 and other harmful gases in the atmosphere.

Among the major contributors to the introduction of CO2 and other harmful gases into the atmosphere is the transport sector. The lion's share is maritime transport, a major player in world trade.

More than 80% of all goods are transported by sea. The maritime sector consumes more than 330 MTOE (tonnes of oil equivalent) per year and is responsible for the 2-3% of CO2 globally, 4-9% of sulfur oxide emissions and 10-15% nitrogen oxide.

Among the most polluting elements produced by marine engines are the sulfur particles contained in naval fuels and released into the atmosphere (at sea and in port).

The International Maritime Organization has issued stringent regulations on the levels of sulfur oxide admitted to the smokestacks, activating controlled areas called "Emission Control Areas", subject to very strict limits, in the coastal waters of North America, the Caribbean, Europe and Asia. From the 2020 also ships bound for waters outside the ECAs will be subjected to very low limits in terms of sulfur oxide. The application of increasingly stringent standards will make most of the fuel today produced "out of the norm". It is estimated that the 70% of the fuel will not comply with the standards in force by the 2025. We cannot therefore find ourselves unprepared given the centrality of maritime transport for the national economy. 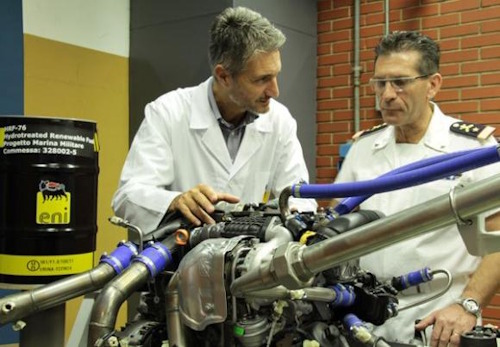 While land transport is slowly adapting to the use of new products that are more environmentally conscious, the maritime sector remains anchored to the past. The problem is the higher cost of green fuel compared to fossil fuel. This resistance could be overcome due to the effect of new and more stringent international regulations. To accelerate the adoption of new fuels it is however essential to invest in research to develop new production methods (improving the cost-effectiveness of processes) and to experiment / certify marine fuels on a large scale, dispelling shipowners' distrust . It is not the first time that the maritime sector has renewed itself by making leaps forward, both cultural and technological. It happened in the transition from sailing to steam at the end of 800, from coal to diesel at the beginning of the 900, in the adoption of the propeller to cite some examples. In all those passages it was the Military Marines that led the change.

Military Marines can make a significant contribution to stimulating research, certification and experimentation with new products, in line with their historical vocation for technological innovation in demanding operating environments.

The US Navy was the first in the world to use green gas oil for both its units and its aircraft, as early as the 2010. The Italian Navy was instead the first in Europe to experiment and use green bio fuel (produced in Italy) on its ships. 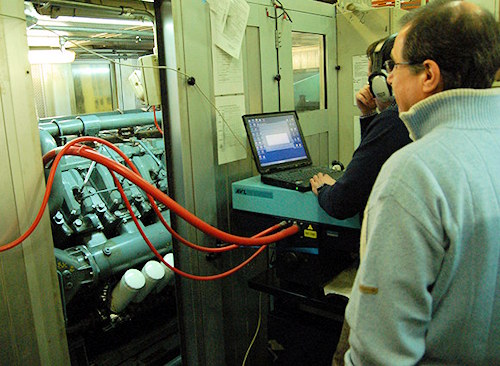 In the 2012, by the will of my predecessor Admiral Binelli, ENI and the Navy started a collaboration for the production of a new type of F76 (NATO name of naval diesel for military use) obtained using a mixture of 50% of green Diesel and 50% of F76 Diesel fossil characterized by a sulfur level much lower than the normal F76, complying with the most stringent EU emission standards, capable of reducing the CO50 footprint by more than 2% compared to traditional F76.

The actual use of biofuels in the Navy began in January 2014, with the experimentation on board of Foscari Ship (photo) of an 50 / 50 mixture of fossil gas oil and “green diesel”, produced precisely in the refinery of Porto Marghera (VE) , derived from palm oil (ENI recently developed a process to extract green diesel from micro-algae, which is very promising).

No adaptation / modification of the engines and fuel systems was necessary to conduct this experiment; the results were encouraging: less carbon residues in the combustion chambers and lower polluting emissions (CO2, sulfur oxide and nitrogen oxide) in the environment.

In the April 2014, in recognition of the initiative and the leading role assumed by the Italian Navy in Europe, the US Navy, at the hands of the Secretary of State to the Marina On. Mabu, signed a cooperation agreement with the Navy, in the matter of bio fuels for naval use.

April 2014 signs cooperation agreement between USN and MMI. In the photo the Secretary to the US Navy and the CSMM AS De Giorgi

Subsequently, in 2015, the use of mixtures with bio-green diesel extended to Nave CAVOUR, Nave DUILIO, Nave MAESTRALE and to the Submarine GAZZANA 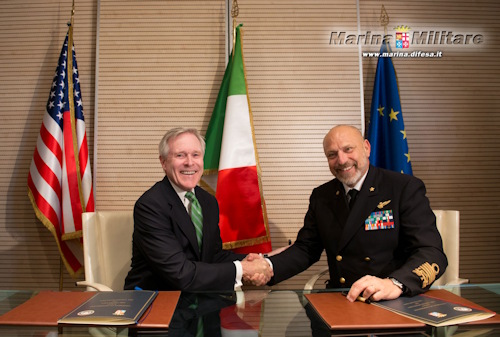 In June, 2016 Nave ETNA carried out a bilateral supply of "green diesel" with two US NAVY ships at sea (in the presence of the undersigned and of the US Navy Secretary, Mabu), to emphasize in a concrete way the importance attributed by the USA to the collaboration with the Italian Navy in the field of alternative fuels sanctioned precisely in the agreement signed in the 2014.

Given the encouraging results and in line with the Italian Government's policy of greater attention to environmental protection, I had set for the Italian Navy the further extension of the use of green F76 blends to the middle of the Fleet within the 2020. Unfortunately, in the summer of the 2016, with the end of my term as leader of the Navy, this directive was in fact abandoned for the following three years, at least until May of 2019, when Vespucci used about 30 tons of green diesel.

The hope is that with the recent appointment of Admiral Cavo Dragone as Chief of Staff of the Navy, the experimentation activity will resume with renewed impetus.

An intervention by the Minister of Defense in support of this initiative would certainly be decisive in giving impetus and continuity to the development and acquisition of non-fossil fuels by the Navy and other Armed Forces, of course where possible and applicable. A Ministerial directive would avoid that with the periodic change of the top and their sensitivities in the matter, the work and the resources already invested risk to go missing. It would also be an important signal from the political point of view, consistent with the environmental protection policies announced by the current government.

The Biden Administration continues to supply the Ukrainians with artillery. After the 155 mm M-777 howitzers and, news ...
12870
Read

As previously written, among the supplies of armaments sent by the Italian government, there are also howitzers / ...
72095
Read

To circumvent the limitations imposed by Congress, the Biden Administration employs its allies to provide ...
19740
Read

No war can be interpreted and explained through the "absolute" and necessarily abstracting lenses of ...
4715
Read

If it weren't serious, it would even be comical. People don't realize the significance and implications that ...
19868
Read

Reuters reports that the United States will provide Ukrainians with long-range anti-ship missiles. If that were to ...
46293
Read

One of the modern fields of study related to learning is the one known as "serious games". Let's start right away ...
2504
Read

Last month we witnessed the sinking of one or more Ukrainian Neptune anti-ship missiles in the Black Sea ...
37693
Read

The Russian Airborne Forces (Vozdushno-Desantnye Voyska rossii - VDV) - like the vaunted Spetsnaz, by the way ...
29801
Read

The supplies of military equipment by NATO and European countries to fighters continue in these days ...
27673
Read