Nuclear power, the balance in a possible Israeli-Iranian conflict 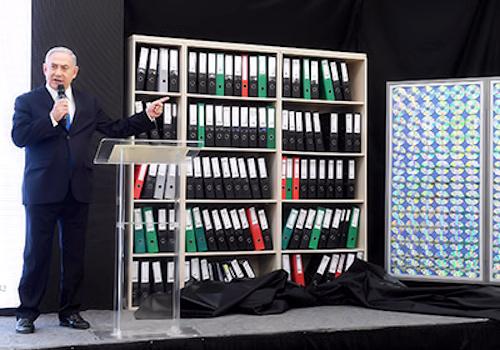 Trump has decided to withdraw from the agreements signed by the Obama administration with Iran on nuclear power, in a move most likely agreed with Israel and coordinated temporally with the live declarations of the head of the government in Tel Aviv that blamed the 'Iran to have lied about its uranium enrichment activity, indicating in support of its declarations 55 thousand pages and as many files on 183 CD, for a total of half a ton of material that has come into possession of Israeli intelligence. Overwhelming evidence that, according to the Israeli government, would confirm that Iran plans to equip itself with at least five nuclear devices similar to those of Hiroshima. "Iran lied (translated Iran lied) " he thundered Netanyahu while slides with graphs and numbers slid on the screen of the national live tv conference. Citing the secret documents stolen from Iran by Israeli special forces, Netanyahu has thus shown his "new and conclusive evidence" with which he aims not only to convince US President Donald Trump to exit the Iranian nuclear agreement, but to win the reluctance of those who, like the European countries, continue to defend their survival.

The United States has guaranteed the authenticity of the secret archive obtained by Israel announcing that the new documents will be shown as soon as possible to the UN agency for atomic energy and to other countries. The international community instead reacted with skepticism, speaking of information already known and dating back to the period preceding the signing of the agreement with Teheran in the 2015. In particular, information is almost identical to those already provided in the "Key Judgment" of the 2007 by the US National Intelligence Estimate and subsequently in a report by the same IAEA of the 2011, entitled "Possible Military Dimensions to Iran's Nuclear Program". So, all documents already known, at the time of the nuclear agreement signed 3 years ago by the then US president, Obama. According to international observers, there is no doubt that Teheran has lied about his activities in the pastà enrichment of uranium for military purposes. The authenticityà of the cards shown by the Israeli premier is not in doubt. The point now is to understand if the military plan has continued in the last two and a half years. In short, given that the documents indicated by Netanyahu are "old", Iran is still lying?

The Joint Comprehensive Plan of Action (Jcpoa), also known as the Iranian nuclear agreement, is worth recalling, born after two years of negotiations between Iran and the 5 + 1 group, or the five permanent members of the UN Security Council. 'UN (China, France, Russia, United Kingdom, United States) plus Germany, in addition to the European Union. The primary objective of the agreement was to prevent Iran from developing a technology that would allow it to build atomic bombs, but at the same time allowing it to continue the program for the production of nuclear energy for civil uses. On the basis of the agreement, and without mentioning every single point of the agreement here, Iran has thus agreed to eliminate its medium-enriched uranium reserves and to cut the low-enriched uranium to 98%; it also undertook to reduce its gas centrifuges for thirteen years with uranium enrichment activities, as well as those of research, limited to a single plant, that of Natanz, by more than two thirds. From the 2015 to today the inspectors of the International Atomic Energy Agency (IAEA) have certified 10 times the Iranian membership of the commitments undertaken in the JCPA through the verification of all Iranian nuclear facilities agreed in the treaty, inspection of other sites the controllers must request and obtain a special permit from Teheran.

What had been called a "historic agreement" to make the world safer by US President Barack Obama, is instead called "the worst international agreement ever signed by the United States" according to President Trump. For some time Trump has argued that Iran is illegally conducting prohibited activities on other (unspecified) sites that are not included in the nuclear agreement and therefore are subtracted from the IAEA team controls, therefore requires that the time limitations be removed and geographic inspections of any nuclear site, including military, Iranian. 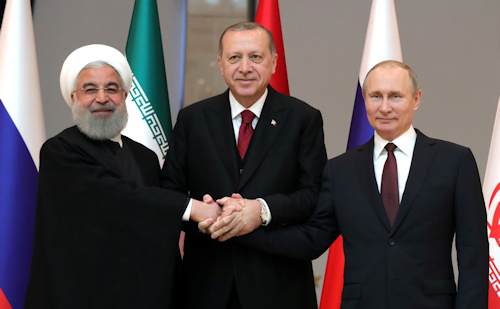 Iran feels strong about the support of Russia which has based its hold on Syria and its outlet on the Mediterranean on the Assad support of the Revolutionary Guards led in person by Qassem Suleimani, strategist of Iranian imperialism and probably before the US decision Israel's attitude of the atomic bomb party in Iran will find new impetus. Israel, for its part, being nuclear power, wants to settle the accounts with Iran until the Ayatollahs have nuclear weapons. The objective of limiting its area of ​​influence to the Persian Gulf region by expelling them from Syria even by force would not be feasible with the same determination if Theran possessed atomic weapons. The example of Libya is a reminder exemplary. The "bomb" is increasingly perceived as the best life insurance for all regimes unpleasant to the US to preserve its independence and relevance.

Meanwhile, once again Europe shows its irrelevance on the great international issues and its inability to influence US foreign policy.

The Biden Administration continues to supply the Ukrainians with artillery. After the 155 mm M-777 howitzers and, news ...
2394
Read

As previously written, among the supplies of armaments sent by the Italian government, there are also howitzers / ...
71574
Read

To circumvent the limitations imposed by Congress, the Biden Administration employs its allies to provide ...
19475
Read

No war can be interpreted and explained through the "absolute" and necessarily abstracting lenses of ...
4592
Read

If it weren't serious, it would even be comical. People don't realize the significance and implications that ...
19426
Read

Reuters reports that the United States will provide Ukrainians with long-range anti-ship missiles. If that were to ...
46101
Read

Last month we witnessed the sinking of one or more Ukrainian Neptune anti-ship missiles in the Black Sea ...
37606
Read

The Russian Airborne Forces (Vozdushno-Desantnye Voyska rossii - VDV) - like the vaunted Spetsnaz, by the way ...
29709
Read

The supplies of military equipment by NATO and European countries to fighters continue in these days ...
27552
Read