The cruise missile protagonist of the intervention in Syria. Italy? In any case out of the game ... 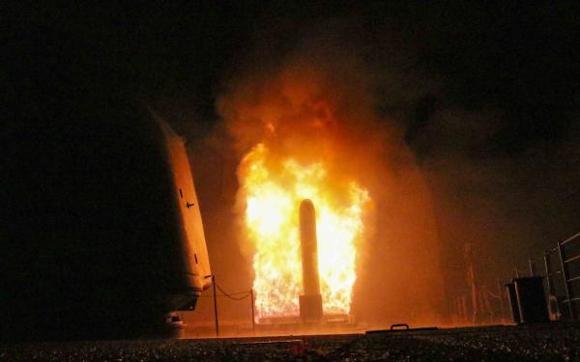 Of the 105 missiles launched against the chemical weapons research and storage facilities in Syria about 70 were launched by naval platforms, of which, extremely interesting aspect, only one located in the Mediterranean, while the others launched from the Red Sea and the Persian Gulf .

Of the remaining 35 missiles: 19 were launched by B1 USAF bombers, probably taken off from a base in Qatar, 6 from Gust French parties from France, 8 from Tornado UK, taken off from the nearby Akrotiri base in Cyprus (ca 150 nautical miles / 280 km) from Syria.

This is a trend that has been going on for some time now and not only in the western field, just think of the attacks carried out in Syria by Russian Navy ships, even in the Caspian Sea, which demonstrates the growing role of Surface Ships as a system weapon capable of projecting force on land, in addition to aircraft carriers, however without having the need for friendly bases and even operating from other sea basins, in total safety. The increasing spread of the capacity to launch cruise missiles from medium-sized ships will make it possible to compensate for the lesser freedom of action of piloted airplanes, kept farther and farther away from areas close to targets thanks to the advent of increasingly effective anti-aircraft systems, as the dreaded Russian S400, whose range of action in this case would have included the same base of Akrotiri from which the 4 took off Tornado of the RAF. 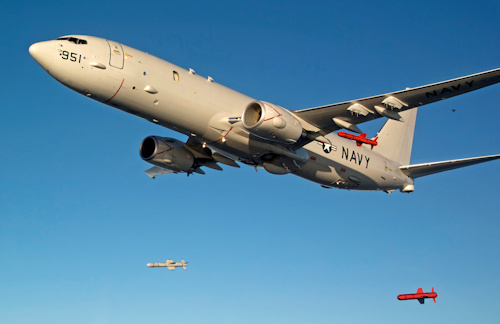 With the increase in the range of use of air-launched cruise missiles, new possibilities are opening up for launch platforms, derived directly from airliners, as is the new Navy P8 marine patrol boat. Poseidon (photo), able, among other things, to launch missiles stand off in significant quantities. In many scenarios, airplanes with aerodynamic and performance characteristics similar to airliners, maritime patrol or transport aircraft can be used to integrate the very expensive 5th / 6th generation stealth fighter-bombers (eg. F35), being able to release a much higher number of weapons at greater distances from the base and at much lower management costs. In this case, the missiles will have to be stealth to penetrate the opposing defenses (as is the case with SCALP and JSSM ER or US LRSSM), instead of airplanes.

An element of novelty was the use, for the first time, of a FREMM as a launching platform for the SCALP cruise missile Naval, launchable by the launchers themselves Silver 70 supplied to the Italian FREMMs, which, however, they are not equipped, having always been rejected by the General Staff of Defense, the request for acquisition by the Navy.

Considering that even the PPAs under construction are equipped with the same launchers as the FREMM, one wonders why the Ministry of Defense does not decide to acquire such a missile that would constitute for our ships and for the National Defense, a very important force multiplier, increasing its deterrence potential significantly.

Since the SCALP Naval is produced by a European consortium would seem an appropriate choice as well as fully in line with the "priority" to the European Defense, so often proclaimed by the Minister of Defense.

The UK and French planes used the Storm Shadow, the air-scarred version of the SCALP Naval with a lower flow rate, supplied (this is, fortunately) also to the Italian Air Force.

The RAF launched 8 using only 4 Tornado. France has used about twice as many aircraft, with recourse to air supplies to launch 6 missiles Storm Shadow.

The operation would have been technically within the reach of Italy as well, being able to still have Tornado (recently subjected to an important life extension plan) and in-flight restockers, although for the "targetting" (capacity in which our Aeronautics has made great progress by retaining considerable professionalism in the sector) we would probably have to rely on USAF or at the RAF.

In terms of the political result that was the real objective of the mission, President Trump obtains an important result in terms of public opinion, while simultaneously giving a strong signal not only to Syria, but above all to other potential users of chemical weapons, re-launching cohesion and the military operations of the Allied Powers. A small club of nations, war winners and permanent members of the UN Security Council, still able to make difficult choices in real time. None of the three Leaders has requested the approval of their respective Parliaments assuming the responsibility to make use of their legal powers.

If the exclusion of Germany and Italy from this kind of intervention should not surprise then, it should instead reflect how, beyond the statements of recent years, the EU was at the window, while France and England played in a "sovereign" way "Their lot of national interest. 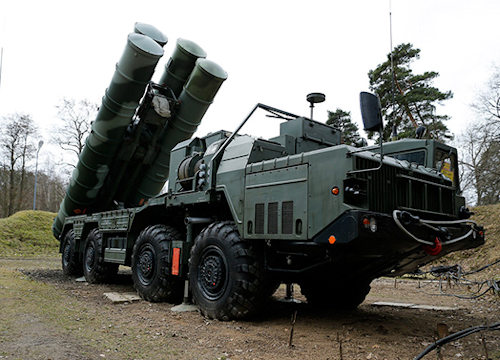 In all this "baillame" the Russians get an important strategic result instead; allowing the US to save face on the "red line" issue against Assad, they received in return the public reassurance that the United States does not intend to change the Syrian regime and that as soon as possible they will withdraw from the country leaving in Iran and Turkey the task of governing peace negotiations and the post-civil war Syria's political set-up.

In the Western field, France is strengthened both in its relationship with the US, thanks to the promptness with which Macron has associated with Trump and has advocated the military action, in which he has shown clear evidence of both possessing autonomous operational capabilities for strategic missions at a great distance from the metropolitan bases, and to be able to credibly interpret the role of regional reference power for the USA, in the Mediterranean basin. Role to which Italy aspired in the years in which France was kept away from NATO and underlined its independence from American foreign policy.

England has effectively used the "minimum" of means, to be in the game, but it has been in the shadow compared to France that more and more can affirm its role as an American ally in England, with the advantage of being the only Power Regional able to contain the neo-Ottomanism of Erdogan and to play a leading role in North Africa and in general in the immense Francophone Africa. In this sense we must not forget the important role played historically by France in Lebanon. Moreover, it is likely that Macron will receive greater freedom of action in Libya, to the detriment of Italy, as a result of prompt participation in Trump's initiative.

It's Italy? In this case we did not even play the auxiliary role of our air bases except for Sigonella and Aviano, which are under US direct authority and from which airplanes destined to raid, but probably electronic support and maritime surveillance, should not be left. , activities that however those bases conduct routine. Moreover, with a Government for current affairs alone it would have been impossible to decide our participation, unless a direct order from the United States, which never arrived. 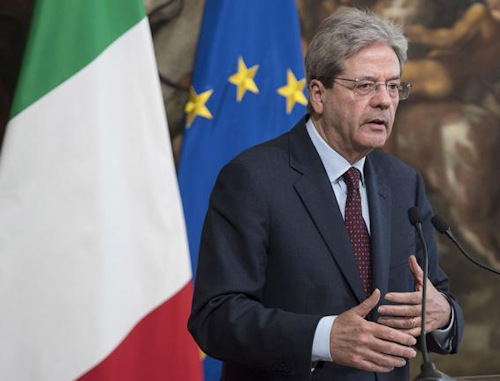 Moreover, even with a Government in the fullness of its functions, our participation is generally realized late after exhausting parliamentary discussions and almost always with the caveat "No combat" that detracts from our participation by minimizing the political return towards the allies and the Italian "standing" on the international chessboard, where the facts count more than words.

In the conditions given, our participation would not have been possible and the Gentiloni Government did well to remain on the question. In situations like these, or you are immediately playing for strategic goals of national interest or better, as did Germany, abstain altogether.

Certainly the times in which Italy showed itself capable of taking the initiative in promptly carrying out ambitious national operations like the Leonte mission in Lebanon, able to coagulate, around Italy, UK Naval forces, French, seem to be far away. Greek, with full recognition from the International Community.

The Biden Administration continues to supply the Ukrainians with artillery. After the 155 mm M-777 howitzers and, news ...
6546
Read

As previously written, among the supplies of armaments sent by the Italian government, there are also howitzers / ...
71800
Read

To circumvent the limitations imposed by Congress, the Biden Administration employs its allies to provide ...
19587
Read

No war can be interpreted and explained through the "absolute" and necessarily abstracting lenses of ...
4645
Read

If it weren't serious, it would even be comical. People don't realize the significance and implications that ...
19610
Read

Reuters reports that the United States will provide Ukrainians with long-range anti-ship missiles. If that were to ...
46180
Read

One of the modern fields of study related to learning is the one known as "serious games". Let's start right away ...
2496
Read

Last month we witnessed the sinking of one or more Ukrainian Neptune anti-ship missiles in the Black Sea ...
37638
Read

The Russian Airborne Forces (Vozdushno-Desantnye Voyska rossii - VDV) - like the vaunted Spetsnaz, by the way ...
29742
Read

The supplies of military equipment by NATO and European countries to fighters continue in these days ...
27605
Read