Home Military world Radio Prora From the battle of Lepanto to the mission I ...

From the battle of Lepanto to the Irini mission 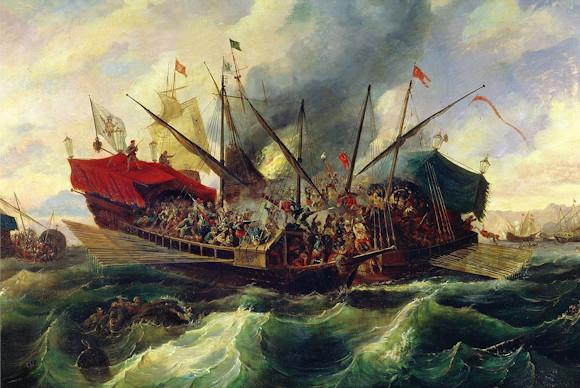 In the complicated geo-political framework of modern history, the battle of Lepanto in 1571 is certainly one of the best known and most cited. A battle that saw the fleet of the then vast and powerful Ottoman Empire contrast with that of the Holy League made up of Venice, the Papal States, the Spain of Philip II, Genoa and the majority of the Kingdoms, Ducati and Grand Duchies of the Italian peninsula. The event was exalted by Christianity as the victory of the victories over the Turks. Hence, the birth of the myth of the battle of Lepanto which in the collective memory was told as a second Poitiers (historical battle of 732 AD with which the Franks of Carlo Martello rejected the advance of the Arab-Berber army of Muslim faith in Europe). In reality, the strategic significance of the victory over the Ottoman fleet was soon compromised by the Spanish will to limit the risk of an expansion of the Serenissima in the Italian hinterland which jeopardized the Spanish influence in Italy.

To be clearer about what we are talking about, however, it is certainly necessary to take a step back and investigate the historical context in which the events took place. About a century before the fateful battle, a phase of great expansion had begun for the Ottoman Empire which with the conquest of Constantinople, in 1453, had continued to enlarge its borders conquering Syria, Egypt, up to - on the African front - Tunisia and Algeria and - on the European front - Moldova and Hungary. The Mediterranean was crossed by powerful Ottoman fleets whose raids questioned economic and political influence of the Republic of Genoa, Venice, Spain and France, conquering many strategically important Mediterranean islands, such as Rhodes and Malta.

It is in this context that the Turks claimed possession of Cyprus, at the time under the control of Venice. The Turkish occupation materialized after a series of bloody clashes against the Venetian troops who fought heroically. The strong Turks of a contingent of almost 90.000 men succeeded after being initially rejected in Limassol they managed to capture Nicosia, whose garrison and the inhabitants were massacred. The head of the Venetian Commander of the Nicosia square Niccolò Dandolo was cut and sent to the Venetian Governor of the Island and rector of the city of Famagusta, the Venetian admiral Marcantonio Brigadin. After rejecting the besiegers, having finished food and ammunition, the garrison had to surrender in exchange for the promise of saving the families of the borrowers. The promise was not kept and Marcantonio Bragadin was skinned alive and hung in the stands. Later Crete, Kefalonia and Zante fell. The Turkish advance was now dangerously approaching the Adriatic. 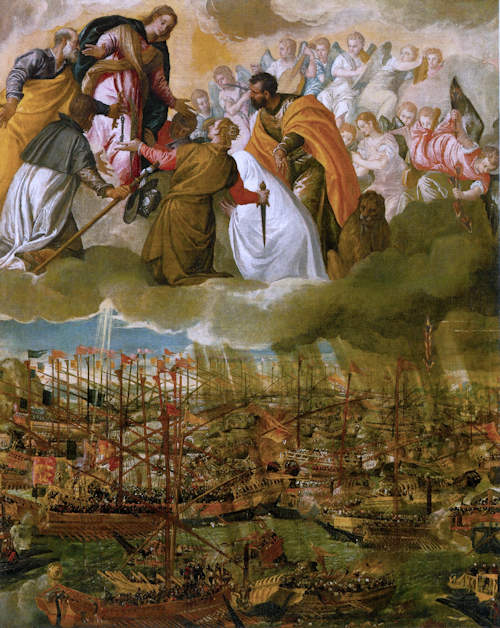 At the same time Pope Pius V ran for cover, carrying out a skilful diplomatic operation, and convincing Philip II to marry the Venetian cause to give life to a Naval Crusade against the Turks, joining his naval forces to those of Venice and the Papacy. Philip II, despite the many open battle fronts (Flanders against Protestant princes and the preparation of what will be the Invincible Armada to be deployed against Elizabeth's England), accepted. The alliance was called the "Holy League".

The Italians were a significant component of the crews and admirals in command. Indeed, the ships of the Serenissima took part, which alone supplied half the fleet available to the Holy League, the Kingdom of Naples and the Kingdom of Sicily, the Papal States, the Republic of Genoa, the Republic of Lucca, the Duchy of Savoy, the Grand Duchy of Tuscany, the Duchy of Urbino, the Duchy of Ferrara and the Duchy of Mantua. The command of the fleet was entrusted to Don Giovanni of Austria with Sebastiano Venier and Colonna at his side. The "right horn" was entrusted to the Genoese admiral Andrea Doria, the left horn to the Venetian admiral Agostino Barbarigo, the rear was assigned to the Spanish Alvaro de Bazan and Santa Cruz, the vanguard to the Spanish admiral Giovanni Cardona.

The two sides faced each other on October 7, 1571 with about 200 galleys on each side and an deployment of men that probably approached the figure of 100 thousand. The outcome of the battle was an overwhelming victory for the Holy League. 137 Ottoman galleys were captured, another 50 were sunk. About 15.000 Europeans enslaved by the Turks were freed. The losses of the Fleet of the Holy League were about twenty. Lepanto was the last major naval battle between Galleys fleets. The victory gave impetus and confidence to the Christian world, establishing itself forever in Western mythology, so pervasive to remain still today in collective consciences as a model of an enterprise capable of compacting forces which are normally disjointed against a common danger. It was also a test of courage and maritime expertise of the Italians who fought very well.

From a strategic point of view, however, the victory did not have the consequences that it could have had since, after the Turkish threat had been curbed for the moment, the competition between Spain and Venice resumed. The first did not welcome the Venetian expansion towards the Italian mainland with the possible temptations to start a unitary process in the Peninsula, to the detriment of Spanish interests in the first place. The disagreements in the western world after the start of the Protestant Reformation were growing, so much so that in the Holy League the Protestant principles considered by Catholics as principes haereticorum, as can be read in Bartolomeo Sereno's Commentaries on the Cyprus War.

More than the Turks were therefore the divisions and the contrasts between the European States to diminish the strategic importance of such a clear victory as that of Lepanto. The Ottoman expansion regained strength to stop only in the late 1600s with the treaty of Karlowitz of 1699, at the end of the Austro-Turkish war (1683.-1699), after being rejected under the walls of Vienna in 1683 and defeated in the battle of Zenta (1697) by troops under the command of Prince Eugene of Savoy.

Why remember Lepanto? Firstly, because the Turks have returned to our sea, or rather the neo-Ottomans. And then because at sea there is, perhaps, a European fleet of the IRINI mission to counter the neo-Ottoman interests.

Erdogan makes no mystery about his vision of the fate of modern Turkey. Retrieve the provinces that were of the Sublime Door1. Including Libya. Before she was Italian she was an Ottoman. A heritage that Erdogan has never digested. 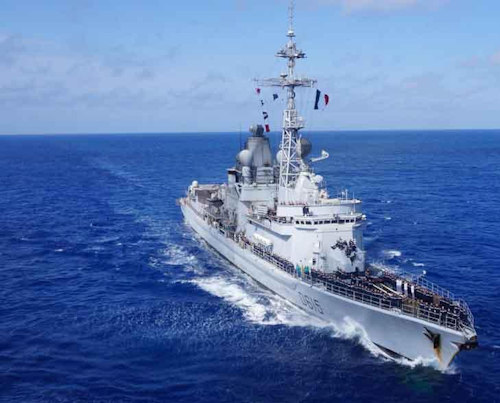 At the time of Lepanto, the Holy League was opposed to the expanding Ottomans, a sort of "coalition of the willing" ante litteram. Today, after the Berlin conference, Europe goes back to sea on a mission to contain Turkish expansion in Libya and the central Mediterranean. With some difference; in Lepanto the European powers deployed 200 warships, today with IRINI only one (French), with the promise of Italy and Greece of 2 others. Malta in the meantime has withdrawn. Germany and Spain will not send ships, but only patrol planes from their respective Marines. More than a fleet, a Squadron. Three ships, without second thoughts. What is certain is that when I write at sea there is only one ship.

The similarities end here. In Lepanto the Turks were routed by the Christian fleet, with the decisive contribution of Italian sailors led by brilliant Venetian and Genoese admirals. Today the outcome would probably be different. Firstly, why the political will to fight will be lacking, even before the military force, which is also very modest.

The Italians in Lepanto, although divided into several states, set aside the oppositions, managing to be decisive for the number of men and means employed, for the courage and the fighting spirit.

Today Italy, for the moment still part of the G7 and among the nations with the highest GDP in the world, appears confused, weak, uncertain, folded in on itself, corroded by internal divisions, out of all games, self-excluded from Libya , as from Somalia.

In common with what happened after Lepanto there is the division of Europe that cannot find a common strategy even in the most difficult moments. Then Spain, after the victory of Lepanto, chose to leave Venice alone to fight with the Ottoman superpower, diminishing the strategic scope of the great naval victory of the Holy League. Today it is France who rows against Italy, with Germany that, having to choose, would probably support Turkey. So much so that it will not send ships, but only a patrol plane.

At sea there is not the powerful fleet of the Holy League, but a small squadron of 2, perhaps three ships with an embargo mission, under UN aegis, declaredly impartial, in fact unable to combat the entry of weapons (they arrive by land ) to the rebel faction of Haftar; undersized and in all likelihood endowed with rules of engagement too weak to face the Turkish naval forces that have been patrolling the Libyan waters for months and who would hardly passively assist in the attempt to block loads of weapons directed to Tripoli. A mission that risks being only facade. Yet another missed opportunity for Italy and Europe.

1 Sublime Door Translation of the term Bāb-i ‛ālī, which designated the government of the Ottoman Empire, in particular the office of the grand vizier and foreign relations. The name remained in the European chancelleries until the fall of the Empire and the abolition of the sultanate (1922) - from Encyclopaedia Treccani.

The Biden Administration continues to supply the Ukrainians with artillery. After the 155 mm M-777 howitzers and, news ...
2405
Read

As previously written, among the supplies of armaments sent by the Italian government, there are also howitzers / ...
71575
Read

To circumvent the limitations imposed by Congress, the Biden Administration employs its allies to provide ...
19475
Read

No war can be interpreted and explained through the "absolute" and necessarily abstracting lenses of ...
4592
Read

If it weren't serious, it would even be comical. People don't realize the significance and implications that ...
19427
Read

Reuters reports that the United States will provide Ukrainians with long-range anti-ship missiles. If that were to ...
46101
Read

Last month we witnessed the sinking of one or more Ukrainian Neptune anti-ship missiles in the Black Sea ...
37606
Read

The Russian Airborne Forces (Vozdushno-Desantnye Voyska rossii - VDV) - like the vaunted Spetsnaz, by the way ...
29709
Read

The supplies of military equipment by NATO and European countries to fighters continue in these days ...
27552
Read