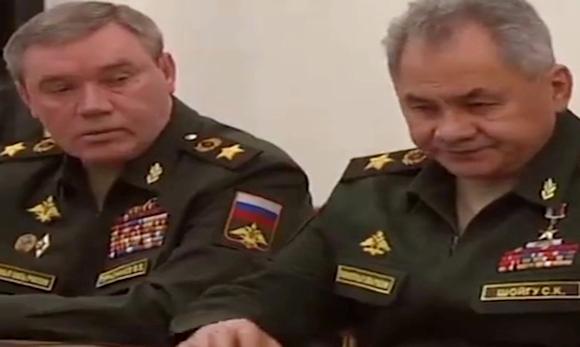 If it weren't serious, it would even be comical. People do not realize the significance and implications of the disappearance from the international landscape of General Valerij Gerasimov who, it should be remembered, since 9 November 2012 is the Chief of General Staff of the Russian Armed Forces, as well as Deputy Minister of Defense.

For some time, in fact, the mass media have noted the absence of his voice regarding the progress of operations on the Ukrainian theater. Numerous people, more or less authoritative, presented themselves to public opinion inside and outside the country and expressed their thoughts: from the Foreign Minister Lavrov, to the spokesman of the Kremlin Peskov, from the journalists who act as a "sounding board" for the language notes imposed by Moscow, on several high-ranking officers (all strictly retired) who have made numerous statements, sometimes even uncomfortable. Even Defense Minister Shoigu made a few brief appearances. But he doesn't. The last time Gerasimov was seen in public was on 11 March 2022, on the occasion of his meeting with the Turkish Defense Chief of Staff Yasar Güler.

Subsequently, in a laconic way due to the lack of real corroborated and reliable information, rumors circulated about his presence in Izyum, in the Kharkiv region, where Putin would have sent him to personally supervise the new phase of the war - the one oriented to the conquest of Donbass, after the renunciation of the conquest of Kiev - as dissatisfied with the performance of General Dvornikov. In April, he had recently received the post of supreme commander of the Russian forces in Ukraine, with the task of recovering a situation on the ground that was certainly not brilliant. At the end of April, theintelligence Ukrainian and Pentagon sources reported the presence of Gerasimov at the command established by the Russians in Izyum.

Before continuing with the examination of the "Ugly pasticciaccio de Valerij Gerasimov" let's see what Russian forces were oriented to the new mission at that time and what importance the town of Izyum suddenly assumed in this evolving scenario.

We come, therefore, to the role of Izyum as k-terrain in the current confused Ukrainian operating scenario. This city, which before the Russian invasion had about 45.000 inhabitants, is located on the Donets River, at the highest point of the Kharkiv region, bordering that of Donetsk and considered the "gateway to Donbass". Its position on top of a hill grants the forces that control it extremely wide areas of observation and shooting, in the direction of the roads and neighboring villages. Russian forces took the city on April 1 after fierce fighting that lasted three weeks. Since then, it has served as a base of operations for Russian forces trying to push south. As we said, in April Russia pulled back a substantial portion of its forces from north-eastern Ukraine and concentrated them in the Izyum area, where they were distributed in correspondence with the rolling stock heading towards the cities of Slovyansk. Barvinkovo ​​is an undetermined target further west.2 Along the route to Slovyansk, however, the Russians would suffer heavy losses between the end of April and the beginning of May. Better went on the main road to Barvinkovo, where they managed to get to the outskirts of the city and whose conquest would help Russian forces cut a Ukrainian railway supply line towards Slovyansk. The main problem for the Russians is maintaining control of the Izyum area, which represents a real operational "pivot", due to the insufficient number of soldiers and the continuous local counterattacks to which they are subjected by the Ukrainians. .

And in this place whose very high tactical-operational value we have described, on 1 May Gerasimov was allegedly wounded in the right leg by shrapnel from a grenade, during one of these actions carried out by the Ukrainian forces. On May 2, both Pentagon sources and theintelligence Ukrainians reported the presence of the general in Izyum and the attack carried out by the Ukrainians, without, however, making any mention of his injury. What is certain is that on the Russian media front nothing has leaked either about his sending to Ukraine, nor about any injuries sustained and his consequent, hasty evacuation to his homeland. Moreover, it appears rather unusual for a Chief of Defense to go to the "front line", especially given the large number of Russian generals who have fallen on the ground in an extremely short period of time. Certainly, Gerasimov's absence from the May 9 parade on Red Square to celebrate the victory day of the Red Army in the "Great Patriotic War" did not go unnoticed. Even this fact for a chief of staff of the Russian armed forces is decidedly unusual.

At this point I can make some considerations. First of all, it should be emphasized that General Gerasimov has held his current position since 2012, therefore for 10 years. Ten years is a long time to spend in the court of Tsar Putin, especially in consideration of the progressive propensity of the Russian president to surround himself with collaborators who are not very inclined to contradict.

What, then, can have happened? I do not have the presumption of knowing the personality of the high officer whose tactical-procedural military thought I have limited myself to, but his career profile provides interesting elements to get an idea of ​​his personality.3 What emerges is the portrait of a man, after all, in possession of a strong moral integrity which also suggests a rather strong intellectual honesty. In spite of Putinian's attitude to surround himself with yes-men, Gerasimov see him as a siloviko anomalous, usually thanks to the president for his gifts leadership military, his ability to command demonstrated on the Chechen and Syrian theaters, his ethics as an officer, tainted by a single negative episode during a long and prestigious career4.

Precisely in the ethics and intellectual honesty of Gerasimov as a man and in the military we could glimpse the reasons for his prolonged disappearance. I absolutely reason in the field of assumptions, but the analysis of the 50 second movie5 in which President Putin orders Defense Minister Shoigu and General Gerasimov to alert missiles armed with nuclear warheads, as a preventive function against a possible NATO aggression against Russia, offers interesting food for thought.

I start from the assumption that the editing of the video is likely to be believed. In it we see Putin always individually framed who, with an assertive tone, orders the readiness of the missiles; at the beginning and at the end of the short video, for a few seconds you can see the Shoigu-Gerasimov couple who merely assent with a nod and expressionless face. An equally significant image is the photograph of the three men during what has been referred to as the meeting held on that occasion,6 with Putin isolated at one end of a long table and the two subordinates at the other end. The indicative code of the subordinate position is emphasized by the interposed distance and the numerical ratio of 1 to 2 of the interaction between the respondents, in which the individual speaks and the others just listen and, if we put the photo with the film into a system , to nod. Yet the role of primus inter pares Putin in relation to the other two, precisely in reference to the responsibility in the activation of the codes for the use of nuclear warheads. And precisely on this aspect a rift could have been created between the parties, with a Gerasimov ready to obey, but by virtue of an ethics and a dose of common sense greater than those revealed by the Russian president, not convinced of what he should do in the case of an executive order.

On the other hand, overnight the authority to be able to press one of the three buttons for the countdown to chaos to the first one that passes cannot be conferred and, if he decides to do so, Putin cannot overrule tout court his top of the armed forces without having identified a replacement who is able to reap the heavy legacy. And indeed, on May 19 Gerasimov reappeared on the scene, following a phone call received from his American counterpart Mark A. Milley.

It is important that Russia and the United States have started using the “red telephone” again, otherwise the risk taken in Cuba in October 62 would have taught us nothing.

After the decommissioning of the M551 Sheridan tank, which took place in the mid-90s of the last century, the US Army ...
1081
Read

The director of the Kredmash mechanical plant in Kremenchuk would have confirmed (source Komsomol'skaja Pravda) that ...
4334
Read

For a long time, Difesa Online has emphasized the importance of acquiring (and maintaining) artillery pieces, monotube and ...
21556
Read

British Army Chief of Staff Sir Patrick Sanders says the invasion of Ukraine by the ...
11544
Read

During the last world war the Panzerkampfwagen V Panther, having solved the initial mechanical problems, was ...
26796
Read