Home Military world Ocean4Future The first take-off and landing of the stori ... 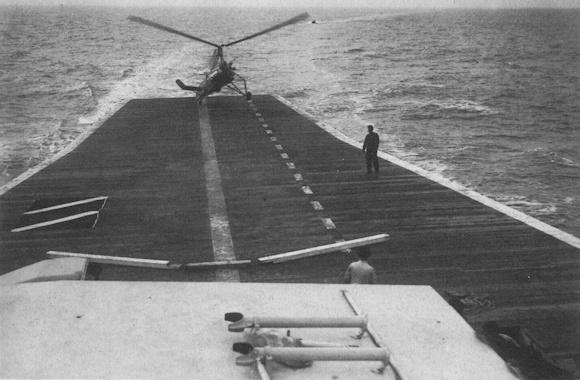 We are now used to seeing planes take off and land on aircraft carriers, at a fast pace, together with ultra-modern helicopters that take off with geometries that were once unthinkable to carry out their missions.

From the Second World War onwards, the use of embarked aircraft has become an essential factor in naval operations (not surprisingly called naval aircraft).

In particular, embarked helicopters are commonly used in all forms of maritime combat, but also in logistical tasks such as the transfer of personnel and materials and for emergency situations (medical evacuation "MEDEVAC" and / or search and rescue "SAR" ). Complicated and high-risk operations, as they involve accuracy, training and procedures previously established in an environment that is not usual and is constantly subject to variations in the attitude of the flight deck.

It is said, with good reason, that helicopter pilots are twice pilots. Not everyone knows, however, that the use of helicopters on board a ship would never have been possible without the experiments carried out in the 30s on a curious aircraft called gyroplane.

The first time was on an Italian ship

The Italian Royal Navy was one of the first to want to test these strange flying machines from a naval unit at sea, and today we will tell about that first time… when a gyroplane landed and took off from the Royal Heavy Cruiser Fiume. 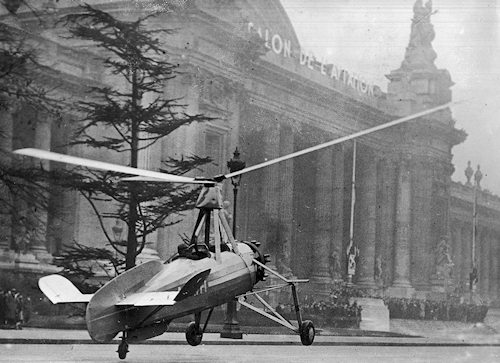 Before telling this event, let's talk about the gyroplane, an innovative aircraft developed by The Cierva Autogiro Company, a British aviation company founded in 1926 to a design by the Spanish aviator and engineer, Juan de la Cierva (hence the name), with the financial support of James George Weir, a Scottish industrialist and aviator enthusiast.

Many examples were made but not without technical drawbacks. Initially, the gyroplane suffered frequent accidents and were considered unreliable.

The first of the Cierva projects to be built in the UK was the C.8 in collaboration with the Avro company. The most successful model developed between the two world wars was the Cierva C.30 (photo), which was made in almost 150 copies under license in the United Kingdom (Avro), in Germany (Focke-Wulf) and in France (Lioré et Olivier).

In December 1934, a test pilot from the Cierva company, a British pilot named Reginald Brie, signed a contract with the Italian Royal Navy to carry out take-off and landing tests on a gyroplane from the Regio Crusader heavy River. The C.30A model was identified which weighed around 553kg unladen and was capable of reaching a top speed of 177km / h with its 140hp engine. It was a two-seater, with a three-blade rotor of 12 meters in diameter, mounted on a tripod support and a faired head. Also in the C-30A the keying of the rotor blades was controlled directly by the pilot with the control bar at hand.

After analyzing the procedures it was decided to carry out the first test with the RN River (photo) at anchor in the port of La Spezia and, later, with the unit underway. The ship was equipped for the occasion with a wooden "flight deck" (trapezoidal-shaped, 40 meters long, 15 in the bow and 10 in the stern) built in the stern, where the gyro, a La Cierva C.30A , would have taken off and landed always at the commands of the RAF pilot Reginald Brie.

The first test was carried out on January 4, 1935, while the navigation tests were carried out two days later, on January 6. The river initially maintained a speed between 16 and 18 knots and then went up to 24. 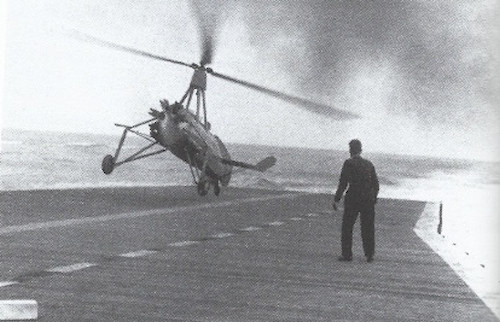 Historically it was the first attempt to take off and land an aircraft from a mobile platform at sea. It was not easy and there were moments of tension on board, but in the end all the tests were successful.

We were in the 30s so there were still a lot of reservations towards those strange flying machines. Nonetheless, although the gyroplane technology was considered not yet reliable and sufficiently capable for military applications, the Italian Royal Navy remained interested in the development of these aircraft and ordered two C.30As for their own purposes.

The interest of the Italian Royal Navy in the gyroplane arose after the newly formed Italian Regia Aeronautica, after having acquired all the aircraft of the navy, had expressed disinterest in the use of flying vehicles of the gyroplane / helicopter type. Experimentation on the RN River it was therefore an attempt by the Italian Royal Navy to evaluate the use of an alternative air vehicle for naval purposes in order to reacquire its own air-naval component.

Unfortunately, against all logic, the success of the experiments carried out on the River led the Arma Azzurra to obstruct the Navy, according to the not very visionary principle, that "everything that flew" must still belong to the Regia Aeronautica. The two gyrocopter acquired then passed to the Regia Aeronautica which, however, did not further develop the technology as it was not of its interest.

What happened to the autogyro? 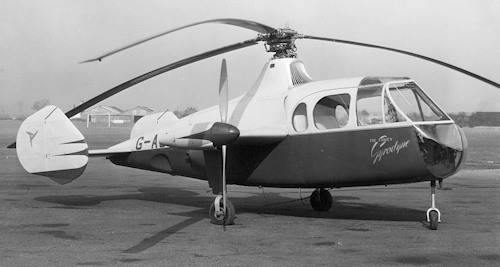 In 1936, Cierva, died in a plane crash in Croydon after the take off of an airliner due to the fog, for which the position of director of the technical office was filled by J. Bennett who managed to propose one of his models, the Cierva C.41, to the Royal Navy. However, development was interrupted by the outbreak of the Second World War.

Bennett later decided to leave Cierva and in 1945 he was hired by Fairey Aviation where he oversaw the development of the Fairey FB-1 Gyrodyne (photo).

Two years earlier, in 1943, the aviation department of G & J Weir Ltd. was reconstituted as Cierva Autogiro Company to develop new autogyro to be proposed to the Air Ministry. Thanks to those studies, the Cierva W.1948 was created in 11 Air Horse (bottom photo), the largest helicopter ever built in the world in those years. The "W" in the designation meant it was a continuation of the gyroplane and helicopter series developed by G & J Weir, Ltd., in the period 1932-1940.

Unfortunately the aircraft was unsuccessful and the first prototype crashed, killing Alan Marsh, the then manager and chief test pilot of the company, John "Jeep" Cable, chief helicopter test driver at the Ministry of Supply, and JK Unsworth, flight engineer. A disaster that led to the cessation of investments.

In North America, Pitcairn continued his studies on the improvement of autogyro (photo), developing a model with a folding rotor and a motive force selectable between the driving propeller and the wheels of the trolley and carried out a series of demonstrations that had some success. With the outbreak of the Second World War, the experiences gained were used for the definitive development of the helicopter which took place in the following years.

Curiously, after the war, a certain interest in gyro-planes returned among flying enthusiasts, but only at a recreational level, actually having no operational advantage over airplanes and helicopters.

The supplies of military equipment by NATO and European countries to fighters continue in these days ...
330
Read

The surprise attack of Bilohorivka will remain in the history of the Russian aggression war on Ukraine on the list ...
36920
Read

Some countries of the former Eastern Bloc have announced that they intend to sell their MBT holdings to Ukraine in order to ...
31346
Read

A few days ago we published in rapid succession the first and second part of an analysis relating to ...
118264
Read

The escalation of military supplies by NATO continues in Kiev. In recent weeks, Ukrainian requests ...
87420
Read

Since the start of the Special Operation, the Kiev Air Force has suffered heavy losses. It would seem that the Russians ...
34344
Read

We have already spoken extensively in the first part of this analysis of Ukraine and its situation; now is...
34481
Read

After having spoken extensively in the latest analyzes of the air, naval and land operations that have taken place so far ...
18130
Read

President Zelensky never ceases to urge NATO countries (and not only those) to supply armaments to ...
9308
Read