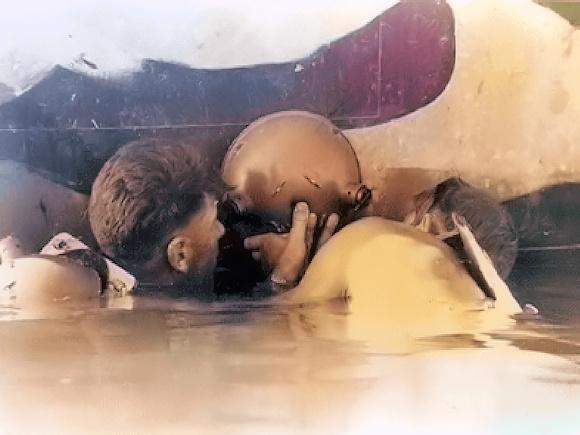 In the Formia base, some members of the future Israeli navy were trained by former X MAS operators to carry out underwater attacks against possible adversaries. They were defined Palyamnik, the men of the Payam, raiders who became notorious during the Arab-Israeli conflict by sinking and damaging ships secretly carrying weapons and ammunition destined for Palestinian Arabs.

We tell their story

Although nuclei of saboteurs had already existed since 1939, in 1943 the naval platoon of the Palmach, which expanded into a company, known as the “XNUMXth Palyam Company” (Palmach-Yam).

In the Palmach Manual of 1953, their main tasks were described as follows: Aliya Bet support (from the transport of ships to the delivery of migrants to the Holy Land); maritime commando training able to sabotage British ships trying to impede immigration; management of combat and supply units of weapons and ammunition; infantry training in amphibious operations with landing craft.

The first mission of the Palyams took place… in Italy! 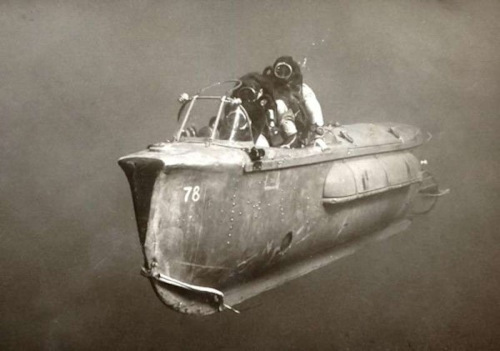 One of the most famous actions carried out in Italy by Israeli saboteurs was the sinking of the ship Linen, an Italian-flagged freighter that officially carried arms and ammunition destined for the Syrian Arab forces.

By March 1948, the security of the "Yishuv" (the Jewish community in Eretz Israel/Palestine) had become critical. Ben-Gurion appointed Shaul Avigur, head of theHa'Mossad Le'Aliya Bet, responsible for the procurement of arms from Europe.

In late March, Shaul received a report of an Italian freighter, the Linen, carrying 8.000 rifles and ammunition from Yugoslavia to Beirut; a war cargo officially for the Syrians but, in reality, intended for the Palestinian Arabs. Shaul ordered this vessel either intercepted or scuttled in the port of Bari, Italy, where she stopped for repairs.

In that context, a character who we will often meet later came into play, Ada Sireni, head of the Italian branch of Ha'Mossad. Le'Aliya Bet who, thanks to his network of acquaintances that reached the then Chief of Staff of the Navy, contacted the Italian authorities to warn them of the imminent secret operation.

In fact, he played on the fact that there was still a sense of remorse for the wicked racial laws that had effectively severed a relationship with the Zionist Jewish world. The authorities then pretended not to know and the Palyam was given the green light for its attack. 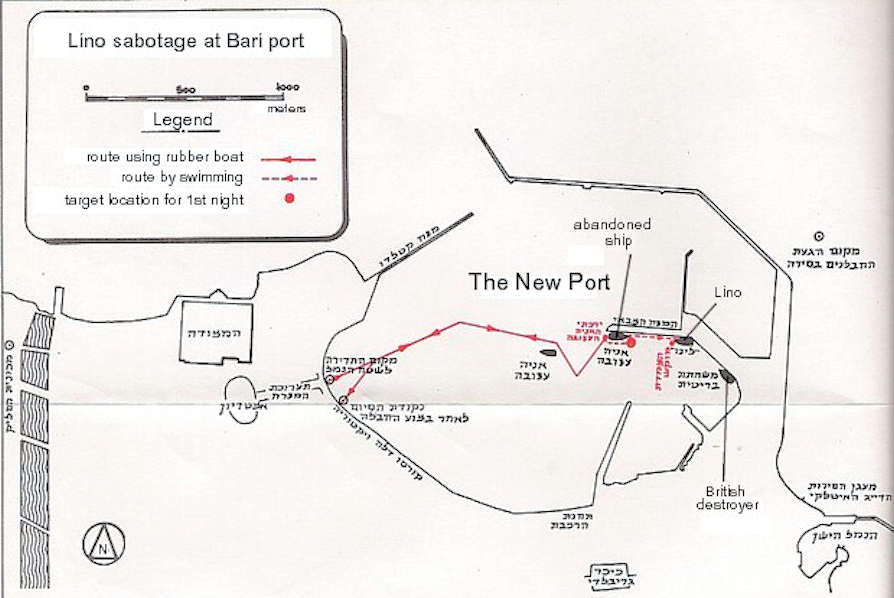 On April 10, 1948, the operation was carried out by two saboteurs of the Payam, Yossa'le Dror and Benni Kravitz, transported near the cargo by a boat driven by Meir Falick. Yossa'le applied an explosive device to the Lino's hull which caused the ship to sink as the three sailed away from the port without a trace. 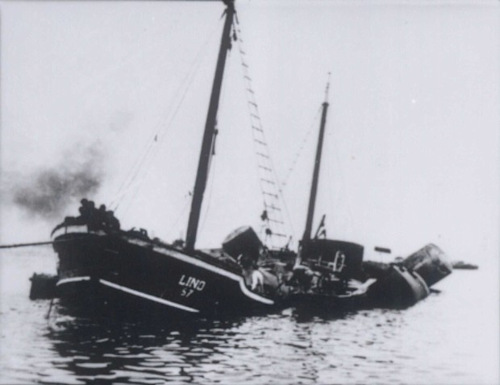 Yossa'le Dror later became a unit commander of the Payam, which included divers and a group of speedboats modified with explosive charges (practically similar to the MTMs of the Xª MAS), which later became the 13th Flotilla "Marine Commandos".

However, the Arabs did not give up their weapons and asked the Italian government to be able to recover them, which was naturally granted. The recovery took place after several weeks before being recovered on behalf of the Syrian government and stored in a warehouse to be transported back to Beirut.

Ada Sereni activated her contacts in order to charter an Egyptian ship, theargiro, for the transport from Bari to Beirut: this through a Bari shipowner who made an agreement with a Syrian army major who arrived in Italy to manage the transport. L'argiro sailed from Bari in mid-August but, at the last minute, some of the crew became unavailable and were replaced at the last minute by a couple of Mossad men, with orders to simulate a breakdown during navigation.

In practice, the Argiro became the new target of the Payam and the operation was planned Mivtza Shoded, “Pirate Operation”, one of the most amazing operations carried out during the Jewish War of Independence. 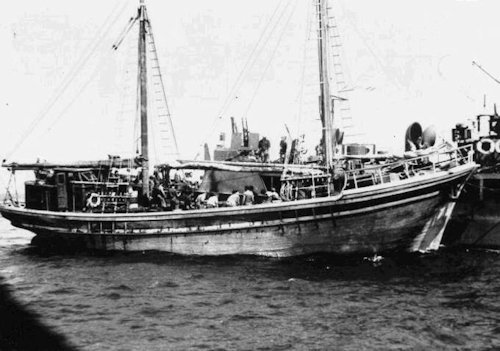 Two saboteurs, Sadeh and Ben-Chorin, with a small boat, approached theargiro which had slowed down due to the breakdown. They boarded theargiro dressed in the uniforms of Italian naval officers and presented themselves before the ship's commander saying that they had been sent by the Italian government to assume command of the ship. To make the story more believable, they told the captain of the argiro that they were actually of Egyptian origin, and had been sent aboard because they were able to navigate safely through the Eastern Mediterranean, still littered with many WWII mines.

Soon the Syrians realized they had lost contact with the ship which seemed to have disappeared into thin air. In fact, the commander ofargiro the problem of informing them did not arise as the two false Italian officers had simulated sending a report to Rome on the ship's movements to be transmitted to the extent pertinent to the interested parties.

Meanwhile, the decision was made in Israel to intercept the vessel with two corvettes, the K-18 and the K-20, designated Wedgwood e Haganah, while on transfer off Crete. Everything went according to plan and all guns and ammunition were transferred to the corvettes, as were the Italian crew and false officers while theargiro was sunk by one of the corvettes. Those arms and ammunition intended for the Palestinians later played a very important role in the ongoing war of independence.

Operations against the British

At that time the sabotage unit Payam he achieved remarkable results by sinking or damaging numerous British patrol boats which patrolled the coast of Palestine, causing serious damage to some of the ships used for clandestine migration to Palestine.

Among them I want to mention these sabotage operations/attacks against British targets:

The sabotage operations mentioned above were all carried out by members of Ha'Chulya, The Squad, a small team of saboteur raiders of the Payam.

Read: "The secret relations between the Zionist groups and the Italian Royal Navy (part I/3)"

Read: "The secret relations between the Zionist groups and the Italian Navy (part 3/3)" 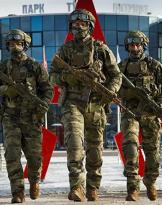 In the second half of January 2023, the influx was detected at the Kadamovskiy training area (region of...
36
Read 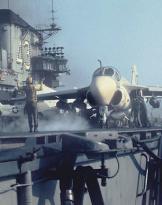 At the end of World War II, the Americans launched Operation Starvation, a mine operation conducted by the forces...
1946
Read

The German Leopard 2 tank is one of the military vehicles requested by Ukraine to face the Russian offensive...
6777
Read 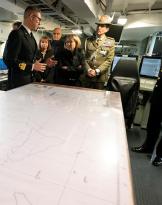 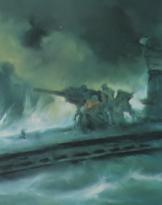 In the new operational environment of the Atlantic, the attack on enemy traffic, obviously no longer bound to the tactics of...
8705
Read 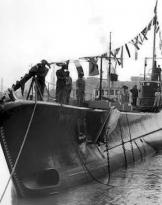 The order of 17 January 1941 to suspend the demobilization of the Bordeaux base and to cancel the return of the...
4199
Read