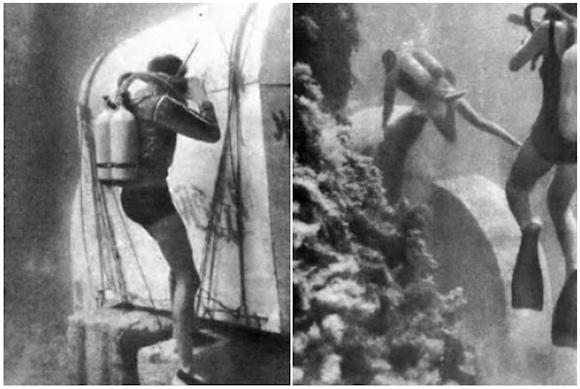 During the Cold War, as the United States and the Soviet Union were looking to space as a new frontier of competition, there was another, less widely publicized race that was fought in the depths of the sea. In those years, research focused on man's ability to spend long periods in underwater habitats, conducting medical and oceanographic experiments.

Those were the times when Commander Cousteau accompanied us with his documentaries to discover the silent world.

In the Soviet Union a group of individuals, members of the Ichthyander amateur diving club, inspired by the underwater habitats experimented by Jacques Cousteau, in August 1966, undertaken in Donetz, Crimea, carried out a first test of long stay underwater near Tarkhankut Cape. It was a purely amateur activity, called Ichthyander-66 (opening photo), in which a man spent three days under water in a habitat of only six cubic meters.

Natural lighting was guaranteed by four plexiglass portholes with a diameter of 20 cm. Inside were two bunks, one above the other, a small table with a telephone, a magazine, personal effects, and scuba gear stowed near the exit. 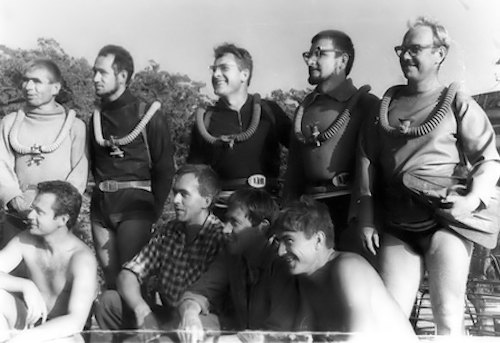 The forced ventilation allowed the aquanauts to smoke, effectively freeing the environment from harmful impurities; electricity and air were supplied by cables and hoses connected to the shore while fresh water and provisions were supplied by other divers from the surface. Needless to say, this curious news spread quickly, attracting the attention of government authorities and scientists.

Given the success of the experiment, the following year the habitat was reused for two weeks; the road was open and the experiments were repeated with theIchtyander-67 e 68, the latter also developed in Crimea in August 1968.

The crews rotated several times and there were also two women, Maria Barats and Galina Guseva, the first USSR aquanauts, who participated in the project Ichtander-67 (next photo).

THEIchtyander-68 it differed from the previous ones in being a living mobile hyperbaric structure that could accommodate four aquanauts (the first were V. Skuby, Yu. Sovetov, E. Spinov, S. Hatset-Lalko). The laboratory started working at a depth of 10 meters (B. Laspi, Crimea), testing bottom drilling activities with pneumatic drive systems.

This experiment, integrating the results of studies on human adaptation in conditions of saturation under pressure, demonstrated the possibility of using an underwater laboratory to develop underwater work platforms. 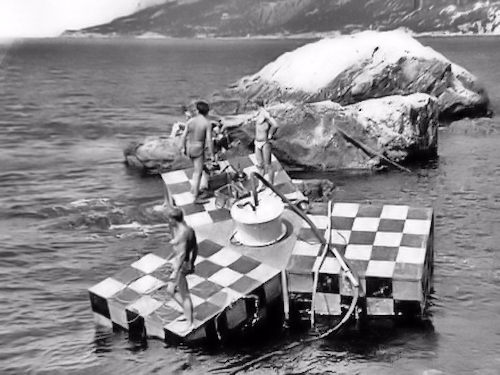 The next model design, theIchhtiander-69, included an autonomous life support system and two hyperbaric chambers for decompression of the aquanauts on board. While previous experiments had been promising, the 69 however, it was not carried out due to the opposition of the government administrative bodies. Since that time the experiments of the project Ichhtiander they were dedicated to experimenting with how to physiologically increase the permanence of a person underwater, experimenting with new personal equipment, real space suits.

After testing the systems in August 1970 (Tarkhankut Peninsula, Crimea) two dives were made during which the Motsebeker-Opsha aquanaut remained underwater (at a depth of between 5 and 10 meters at a water temperature of 17-21,5 °C) 26 hours 15 min. Later the aquanaut S. Khatset-Lalko even reached 37 hours 40 min.

Aquanauts maintained a normal level of mental and physical performance, could sleep in hydraulic weightlessness, perform a certain amount of work, eat, etc. The functional deviations found were associated with sensory isolation and hypothermia.

In addition to these private underwater habitat projects, similar experiments were also conducted at the state level. In 1966, the first state-owned underwater laboratory under the name of “Sadko” was launched1. 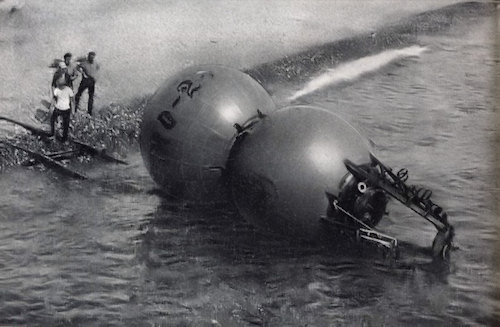 The habitat was in the shape of a sphere with a diameter of three meters anchored to the seabed. A telephone line connected the two inhabitants of the underwater house with the outside world. The air was supplied from the outside through a ventilation system supported by a pressure equalization device. The first experiment was done on animals up to a record depth of 35 meters. Then we moved on to human experimentation.

The first two aquanauts were underwater for about six hours, followed by a continuous rotation of eight crews.

A few years later, the second underwater laboratory, “Sadko-2” (photo) was built. More spacious, including two spherical compartments containing work areas, a bathroom and a pantry. During the experiment, two scientists stayed at a depth of 25 meters, working for six days.

Officially dedicated to the study of hyperbaric medicine, it is thought that it actually also had a military purpose: to verify the possibility of placing underwater habitats on submarine communication cables with the aim of spying on transcontinental conversations.

In 1969, scientists developed the third habitat, "Sadko-3". This time, the habitat was made up of more elements, with better habitability. Although the project was successful, it was decided at the state level to suspend further trials. 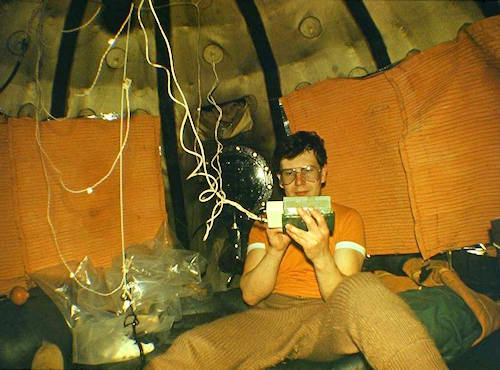 Among the experiments conducted in that period it should be mentioned the habitat "Спрут" (Sprut) which was installed on June 14, 1967 in the Black Sea. Three divers, members of the city club Dosaaf “Dolphin”, Alexander Korolev, Victor Shabalin and William Muravyev, built a strange balloon, which they called Sprut (Kraken), handcrafted in the Kara-Dag area, where they lived and conducted oceanographic research for the Research Institute of Fisheries and Oceanology.

Sprut was the first pneumatic underwater structure in the Soviet Union and could be defined as a underwater balloon. In practice it was a gas-tight sheath, composed of three layers of canvas and one of rubberized aluminized fabric that offered durability and thermal insulation.

When filled with air, the upper part of the habitat took on a spherical shape with a cylinder in the center which ended in turn on a flat bottom. The outer shell was slightly smaller than the inner one, and two portholes with a diameter of 300 mm were incorporated into the two shells. The hydrostat was enclosed in a hemp rope reinforcing mesh (like a hot air balloon) with a diameter of 10-12 mm, which, through four cable slings, fixed the habitat to the bottom. A decidedly curious project. 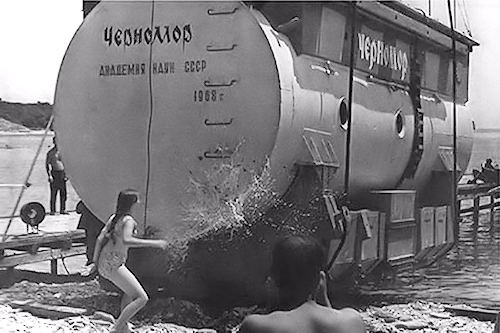 In the following years, the project was started Chernomor II M which draws on previous experiences.

The official scientific task was to record the illumination of the underwater light field and study the lithodynamics of the coastal zone. It was also planned to study the biocenoses of solid soils and carry out experiments for medical research.

The experiment involved a 70-day stay at a depth of 15 meters, a long period aimed at breaking the 59-day record that had been set in the spring of 1969 by the US Tectite project off St. John. Virgin Islands.

The interior was very austere, in keeping with the Soviet style of the time, but not much different from that of Western workshops. However, the environmental conditions proved to be terrifying: 30 degrees of temperature, almost 100% humidity, with a very high risk of getting sick from bacterial proliferation (the aquanauts said they were forced to wash themselves continuously with alcohol). Nevertheless, they resisted until November 1971, 52 or for XNUMX days, until, due to a violent storm, the moorings of the structure broke. 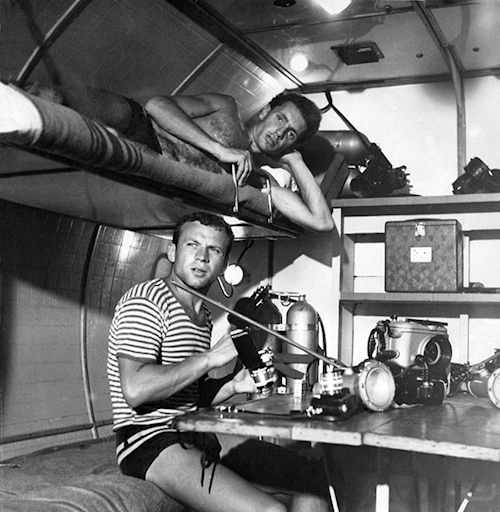 At three o'clock in the morning on 20 September the ground connection cables broke, the power supply was interrupted and the aquanauts had to switch to the on-board batteries (which in theory could have given them about 10 days of autonomy).

To escape the effects of the adverse weather conditions, the laboratory should have rested on the bottom but the ballast tank filling system did not work and the deep effects of the waves dragged the laboratory almost to the shore. Later, it was discovered that it was not just a fatality but a design error had been made. On September 21, the government newspaper Izvestia reported that the laboratory crew members had been evacuated from a depth of 50 feet. Being saturated, due to the long stay underwater, the crew had undergone a rapid decompression but managed to save themselves (although one of the scientists remained disabled)

In 1972, the Chernomor II M habitat was used underwater again… for the last time. Then it was transferred to Bulgaria for an exhibition and later became a permanent exhibit of the naval museum in Varna.

Studies of the physiology of aquanauts who had participated in the "Ichthyander" and "Chernomor" projects and further work conducted at the Donetsk State University (1970-73) led to the possibility of using the standard decompression modes from a new depth "saturated ”, therefore using a “shifted zero”.

According to the sources cited, the most important achievement was the establishment of a new way of breathing gas under pressure with a 32-fold density of the neon-oxygen mixture at “depths” of up to 450m, theoretically equivalent to diving conditions with helium- oxygen at a depth of 2.500 meters.

Even after the collapse of the Soviet Union, the Russian Federation showed a strong interest in the underwater environment, seeing in a visionary way the importance of mastering the abyss. I am not referring to the fleet of nuclear submarines of the Moscow navy but to small civilian and military submarines capable of reaching great depths and performing underwater work.

Although underwater habitats have been replaced by these sophisticated means, the contribution of Russian aquanauts to the conquest of the deep has not been forgotten.

Beyond the scientific aspects, the growing interest in the oceans hides more and more political and economic ends. From a military point of view, the espionage task has been joined by the operational one: communication lines, pipelines and gas pipelines are strategic objectives that are easily reachable and… can be sabotaged. It is no coincidence that there is already talk of a new form of warfare to be fought not on the sea but in the abyss with autonomous and increasingly innovative underwater means to grab vital resources and information but also capable of damaging vital pipelines ... but that's another story .

1 Sadko is an epic character of a XNUMXth century merchant, a skilled player of gusli - an ancient stringed instrument. Legend has it that Sadko manages to get rich thanks to the king of the lake fascinated by his music, who however decides to make him a prisoner in the abyss of the lake waters. In the end, however, Sadko will be able to free himself thanks to the help of Saint Nicholas. 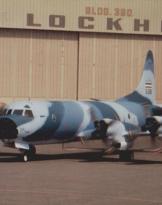 During the 70s of the twentieth century, as part of the rearmament program of Iran promoted by the then Shah ...
117
Read 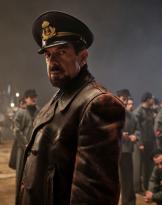 The filming of the film "Comandante" began last November, with the Roman actor Pierfrancesco Favino in the role...
1431
Read

The Army has so far been the only stable institution in the whirlwind of economic, political and judicial crises of the...
10310
Read 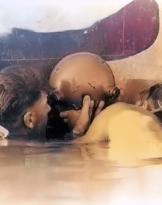 In the Formia base, some members of the future Israeli navy were trained by former X MAS operators to ...
1657
Read

During the 60s and 70s of the twentieth century, the Shah of Iran, Mohammad Reza Palhavi, taking advantage of the status of ...
2031
Read

For decades now, North Korea has been one of the most active countries in the development of weapons of destruction of ...
3511
Read

The Centauro II 8x8 won the tender for the supply of 98 armored cars to the Brazilian Army. The government of Brasilia had…
8523
Read