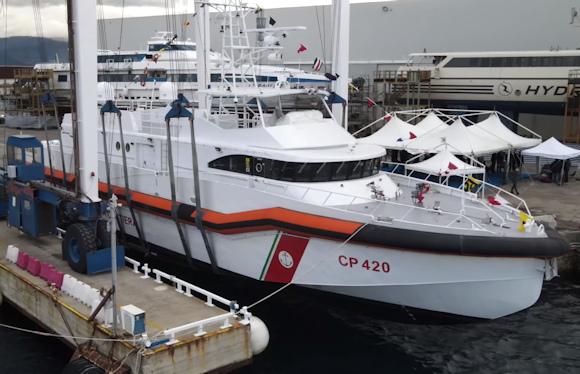 The ship of the Coast Guard CP420 Natale De Grazia, class leader of the new units Angels of the Sea, was launched on 12 December in Messina, dedicated to the homonymous Commander, the gold medal of merit of Marina who died the night between 12 and 13 December 1995. The CP420, following the formal handover on 9 February, she was placed under the command of the Lieutenant of the Port Authorities, Massimiliano Quintosta, who with his crew is conducting further tests at sea to familiarize herself with the main on-board systems.

The CP 420 Natale De Grazia is a ship that aspires, together with its crew - Admiral Pettorino had underlined on the day of the launch - to demonstrate those values, that generosity and passion of the Commander whose name he bears, with pride and pride.

This type of new naval units is part of a project co-financed by European funds under the Internal Security Fund 2014/2020 and represents an Italian shipbuilding excellence produced by Intermarine in the Messina shipyards. The ship is equipped with "self-righting" technology, the first of its size, a mixed propulsion system with Kongsberg Maritime waterjets and MTU-16V2000M96e diesel engines. As far as sensors and communication systems are concerned, modern radar equipment (S and X band), ECDIS – VSAT, HF 500 / 150W Rhode & Schwarz, Warship AIS, NAVNET system can be included. 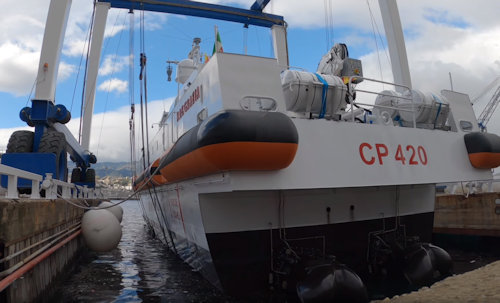 The ship, built in aluminum alloy, has a length of 33 meters, 150 tons of displacement and range of up to 1000 nautical miles at 28 knots. The boat can reach 31 knots of speed and has a seaworthiness of 6 and wind up to 47 knots with a crew of 10 men and can accommodate up to 200 people. There CP420, together with the pariclass units CP 421 Roberto Aringhieri whose delivery is scheduled for December this year, they are equipped with advanced C2 systems that ensure high receptive and logistic capacities necessary for use in search and rescue and rescue operations at sea even in very demanding weather and marine conditions.

Among these advanced systems of the UN Christmas De Grazia falls on SeaGuardian successfully delivered and tested these days. The system produced by the Ravenna-based company A.ST.IM SRL represents a new technological generation of mission systems that can be used both in the naval and in the land sector, with the version called Talon.

Il SeaGuardian who in one of its versions it can also be configured as a CMS (Combat Management System), it is mainly dedicated to the tactical management of missions aboard various platforms including: Patrol Boat, Fighting Boat, RHIB or at ground control rooms or in offshore installations. The SeaGuardian equipped with SAR and OSD mission module (initially developed for the Italian Coast Guard) and NSOF (for the projection forces from the sea) has already been purchased by several national customers operating in the military and law enforcement.

This afternoon, the Ministry of Defense of the Russian Federation issued the following statement: "Two ...
2151
Read

The latest news about the movements of Russian troops towards Crimea speak of three regiments of the VDV (Vozdušno -...
5688
Read

The tension between Ukraine and Russia does not seem to be defused, having been engaged for weeks to "flex their muscles" in the ...
4474
Read