Home Military world NATO Defense Planning Process: what it is ... 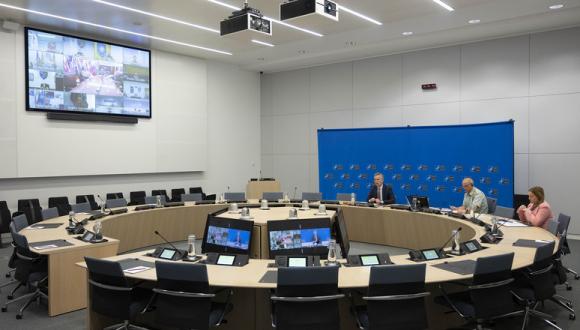 NDPP, a more or less unknown acronym for an even more unknown process.

NDPP means NATO Defense Planning Process and it is one of the most important processes among those used in the Atlantic Alliance. It aims to offer a framework in which national and NATO military capacitive planning activities can be harmonized to ensure that the Alliance as a whole has the necessary strengths and capabilities required to meet future challenges.

One might therefore think, at first glance, that the NDPP is something that concerns NATO, but it is not quite so.

The process of allocating resources within the Defense budget is considered by scholars of strategic issues "Grand Strategy". In an interesting article by friend Jordan Becker and Robert Bell1, the authors support the thesis that in a period such as what we live in these years, defined as ambiguous (fog of peace), operational military considerations regarding the allocation of resources are subordinated to national, regional policies and only ultimately to those of the Alliance.

One wonders, therefore, if it is true that the NDPP is the process used in the Atlantic Alliance to plan the optimal resources and capabilities necessary to face emerging challenges but States are primarily interested in meeting their internal needs and only in continued to satisfy the requests of the Alliance, what is the real effectiveness of the process put in place.

The question is not trivial and all American scholars ask it Grand Strategy.

We recall that the commitments in the Alliance are made by the heads of state or government of the Allied countries and not by the last come. In 2014, for example, the Alliance countries pledged to increase defense spending to at least 2% of GDP by 2024. If it is true that an increase in national defense spending is not said to lead to a capacitive growth in line with what was decided in the NDPP context, however it is true that the continuous decrease in the national budget in recent years seriously compromises the possibility of achieving the set objectives.

Without any presumption of exhaustiveness, let's try to understand something more about NATO Defense Planning Process.

The NDPP is a five-step process covering a four-year time period.

Il first step it consists in establishing the political guidance of the process (Political Guidance). It is made explicit in a document, revised every four years by the Defense Policy and Planning Committee Reinforced - DPPC (R) - which establishes general aims and objectives that must be achieved by the Alliance in the following four years. It is prepared from higher level policy documents (Strategic Concept) and has a sufficient level of detail so that planners can clearly determine the necessary skills. Inside it must be reported the "Level of Ambition" of the Alliance, the skills required in terms of quality and an indication of the times and priorities for implementation.

Il third step it consists in dividing the capacitive requirements identified between the allies (Apportion requirements and set targets), through individual assignment or by groups of States. The Strategic Commands, under the leadership of ACT, and assisted by NATO International Staff prepare a package of skills to be assigned for development to each ally, with associated priorities and times. To do this, the principle of "fair burden sharing" is applied.2. Once the Minister of Defense of the assigning country agrees to develop the capacitive package assigned to him under the Alliance, it is included in the national planning process.

Il fifth step it consists in reviewing the process (Review results), starting from the examination of the level of achievement of the initial political objectives, of the level of NATO ambition and of the military capabilities in order to offer useful feedback for the next NDPP cycle. The auditor is the Defense Planning Capability Review led by NATO International Staff.

It is clear that the NATO Defense Planning Process is complex and requires constant commitment from all allied nations, NATO relies on capabilities and forces made available from time to time by allied nations and not as someone thinks about NATO forces ( often read as USA!).

If it is true, as discussed by my friend Jordan Becker, that states are more likely to meet national, then regional and only after the Alliance needs, then the risk is that sooner or later the Alliance will be unable to deal with it. the challenges for which it was created and still exists.

Then we must pay attention to what is said when we speak.

The critical remarks of the American President Trump who wanders the Allies for not keeping the 2% commitment, like the irritated responses of the European partners towards an Alliance unable to adapt to the new needs are useless, or are probably counterproductive, the better then let diplomacy speak, the more he uses to seek compromise!

In fact, an Alliance reflects the power relationships existing between elements of a given international environment, it is certainly not a magical tool for solving problems that have always existed.

The Turkish government's decision to make the Hagia Sophia a mosque is part of the process of ...
2026
Read

The US Navy reported a "terrible tragedy aboard the USS Bonhomme Richard (LHD 6) when a fire broke out ...
3535
Read

On March 2018, XNUMX, the President of the Russian Federation Vladimir Putin, during his speech on the state of ...
4180
Read

Trump's recent ban on Chinese students from American universities1 was born from far away, and is the son of ...
2914
Read

After the blocking of parliamentary work due to COVID-19, the Government presented the annual resolution on the ...
7598
Read

2020 will perhaps be remembered as the year of the change of the national strategy: from a purely defensive posture the ...
2395
Read

According to the Chinese Academy of Military Sciences, the national naval strategy must have the primary objective of ...
5064
Read

After a week of relative calm in Libya, fighting has resumed in the Sirte area between government forces ...
1941
Read