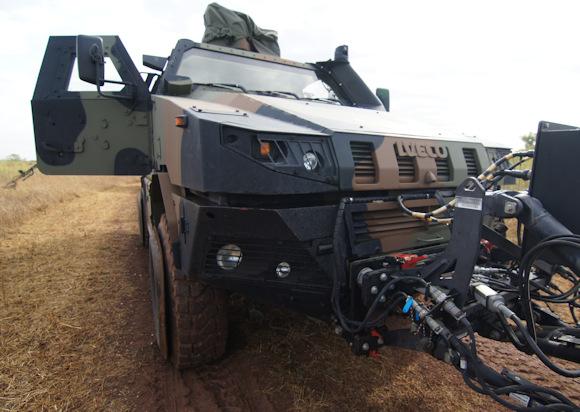 Thanks to the availability of Genio command we discovered the VTMM (Medium Multirole Tactical Vehicle) "Bear", also classified as an MPV (Medium Protected Vehicle). An obligatory step for Iveco Defense Vehicles which wanted to provide our army with a vehicle inspired by the MRAP (Mine-Resistant Ambush Protected) concept already known on the US Army vehicles and represented by platforms such as the Cougar TT e Buffalo A2.

The two-axis Italian is a specialized armored vehicle (it is the multi-role with the highest protection among those in service in the Army) anti-mine, capable of performing various tasks.

The Advanced Combat Reconaissance Team (ACRT) is equipped with sensors and equipment for the search and removal of improvised explosive devices (IED) commonly used on road routes against military convoys in motion. 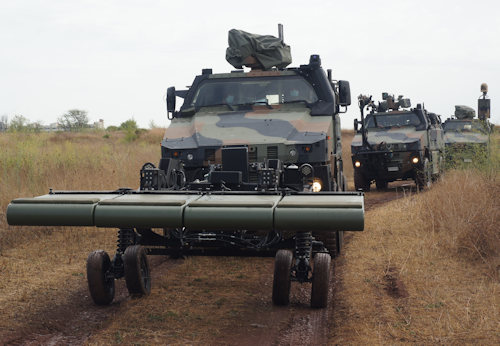 Its configurations and its airframe, which recalls that of the VTLM Lince in terms of safety, make the MPV a highly mobile vehicle suitable for transporting from 5 to 10 soldiers. Here too, as in the Lince, the seats are not secured to the base but to vertical supports, a potentially "vital" detail in the event of a detonation.

On board it is mandatory to wear a helmet and to be secured with 4-point belts.

A nodal center for communications or structures with tools for logistic intervention in the field can be set up in the protective cell compartment, while in the Ambulance platform for specialized advanced rescue, it is possible to transport and assist two injured people, one of whom is seriously injured.

The choice of lengths of the MPV are related to the type of use and vary between 6500mm and 7200mm for the version Ambulance.

This is one of the most important functions of the MPV which orders and regulates the concept of in total safety find mines. It allows a team of five specially equipped and remotely controlled VTMMs to detect, monitor, examine and manipulate underground IEDs along a path. 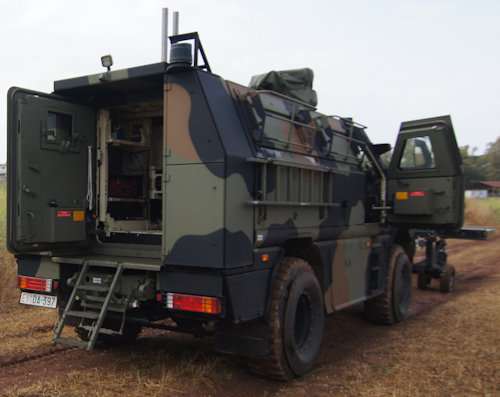 A refined project in collaboration with Leonardo, MBDA and Iveco as system integrator, but it should be noted that the vehicle reclamation operations Route Clearance Package they are actually protocols already existing in armies, while it is a novelty to have formed a team with sequential tasks and precise roles: Tinder (RCP1), Detection (RCP 2), Confirmation (RCP3) and Observation (RCP4). The different configurations also include depth sensors and a remote-controlled robotic arm for the extraction of the bomb that risks detonating during maneuvers.

Structure Trakker, already known for extreme commercial uses, has been revisited to optimize surfaces by moving the driver's seat and steering column back, leaving the engine outside the protected cell Cursor 8 which now occupies an anterior semi volume.

An update that transforms the characteristic shape of the Trakker into a two-volume compact. The front axle also remains aligned to its original position and its powertrain kinematic chain - gearbox, transfer case, differentials and axles - is always housed under the frame.

Looking at a commercial two-axle Trakker AD-190T36 W and making a parallel with theBear, we realize that the total ground mass values ​​are almost equal and comparing the heights, the MPV is about twenty centimeters lower. 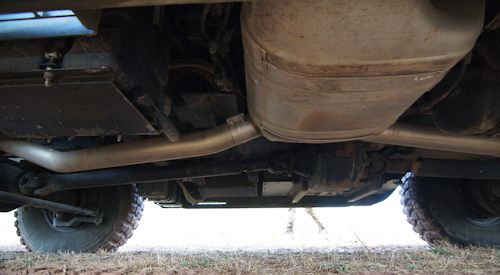 Another aspect that catches the eye is the wheelbase of the MTV set at 4000 mm on the 4X4 version, while in the two-axle civil derivation it ranges from 3500 to 4500 mm.

An intertwining of values ​​and subdivision of more "concentrated" forces and masses not only to stiffen the structure but also to ensure longitudinal stability when driving on dirt.

The minimum ground clearance under the differentials stands at 350 mm, while it is about 500mm on the rest of the frame.

The suspensions are not independent but with rigid bridges, but by virtue of the presence of the protective cell on the entire perimeter, the MPV can do without a flare excavation.

Precisely for the qualities of robustness, heavy trucks adopt suspensions connected to rigid bridges, which according to their refinement, can be leaf spring or pneumatic. The rigid bridge during compression on one side increases the travel on the opposite side, consequently tilting the wheel axle on the vehicle's track.

At the front you can see the massive bridge and stabilizer bar, the leaf springs and the telescopic shock absorbers with the end-of-stroke rubber pad. 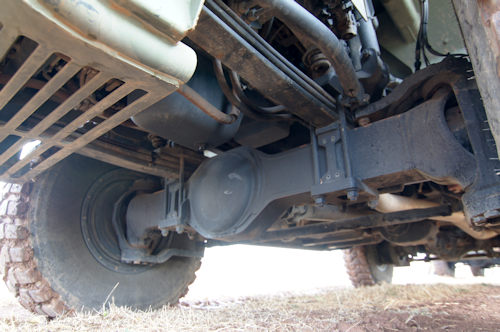 The 17,5 meters of turning circle in the clearance range are interesting, which translate for the MPV into good maneuverability even with its maximum load of 19 tons to which are added approximately 6t of towable mass for a total of 25t of combined total mass, a satisfactory value even in the civilian version compared.

Brilliant is the Cursor 8 6-cylinder engine with 7,8 liters and 360 hp, which includes a variable geometry turbine - VGT Variable Geometry Turbine - in the supercharging system to increase the starting and elasticity, eliminating the turbo-lag and enhancing the readiness in acceleration.

The speed is limited to 90 km / h while maintaining a large reserve of power that would push it far beyond.

The transmission system is of the automated type ZF 12AS1930 TD (without torque converter) with permanent traction on the axles following the widespread concept full time. The system is flanked by an internal hydraulic retarder switched on the first stroke of the brake pedal which also acts on the engine brake located on the manifold as well as on the calipers. The retarder can also be operated manually using the right lever on the steering wheel column, which incorporates the hand throttle. 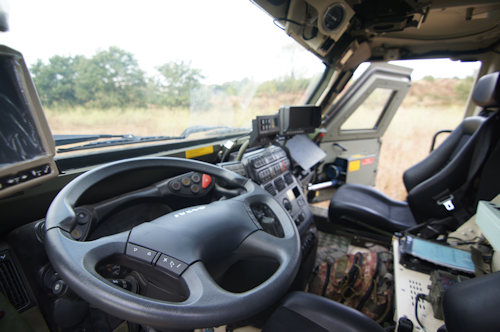 There are 24 overall ratios, twelve “long” and twelve reduced gears, to which is added the command of the longitudinal and transverse blocks of the differentials. The gearbox is located on the right side of the dashboard, has a three-button keypad and is visibly similar to the one used on Iveco Magelys.

The upper left half (driver's seat) of the dashboard is similar to that adopted by the Trakker. On the right side, the one destined for the head of the machine, a support plate is equipped, supported by the standard structure, while monitors and specialized equipment are located on the entire surface bordering the armored windscreen.

Despite the size of a "truck", the MPV like the Trakker, maintain the ease of an off-road vehicle guaranteeing to remain attached to the ground, even sideways with an inclination of 30%.

The Biden Administration continues to supply the Ukrainians with artillery. After the 155 mm M-777 howitzers and, news ...
1141
Read

As previously written, among the supplies of armaments sent by the Italian government, there are also howitzers / ...
71386
Read

Apparently the Army of the Russian Federation is also bringing in the latest versions (dating back to the 80s ...
49707
Read

To circumvent the limitations imposed by Congress, the Biden Administration employs its allies to provide ...
19400
Read

No war can be interpreted and explained through the "absolute" and necessarily abstracting lenses of ...
4559
Read

If it weren't serious, it would even be comical. People don't realize the significance and implications that ...
19312
Read

Reuters reports that the United States will provide Ukrainians with long-range anti-ship missiles. If that were to ...
46053
Read

One of the modern fields of study related to learning is the one known as "serious games". Let's start right away ...
2482
Read

Last month we witnessed the sinking of one or more Ukrainian Neptune anti-ship missiles in the Black Sea ...
37585
Read