A gold medal among the Italian integral: the Panda 4x4 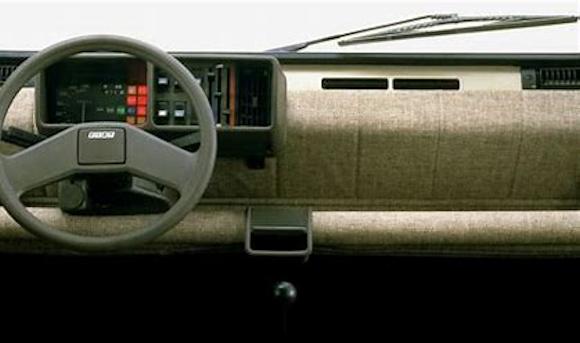 It is said that Giorgetto Giugiaro designed, together with the designer Aldo Mantovani, the Panda in Porto Cervo during a 15-day vacation. It seems that the then CEO of Fiat Carlo De Benedetti had launched the idea of ​​replicating the success of the Fiat 500 in Giugiaro and in fact from the designer's drafting machine during the two weeks in Sardinia, the "Zero" project took shape, then numbered as 141. It was 1976.

The price of the new car had to slightly exceed that of the small 126, but above all to be competitive with other successful economy cars: Renault 4 and Citroën Dyane and 2 CV.

A traditional body and two-cylinder (Fiat 126) and four-cylinder (Fiat 127) engines with rods and rocker arms before the advent of the Fire made this new Italian utility car, easily recognizable for the collected instrumentation, the flat surfaces, the simple door pockets. objects and seats that were inspired by beach chairs, the young, simple and spartan car that, with the right name Panda, since 1980 recorded well over 7 and a half million copies produced. Five million were the numbers for the Fiat 500. 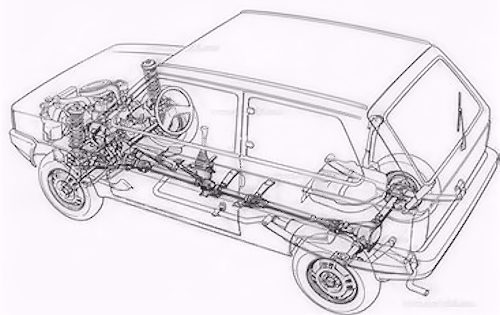 For the Armed Forces the 4x4

Needless to say, the Panda was destined to become a sort of military lieutenant, at a time when the Police and Carabinieri split with real ladies, the Super Giulia andAlfetta, while in the Army it was the Fiat 127, 128, 124 and 131 together with the AR59 that were recognized during the passage in the squares of arms of battalions and regiments.

Many in those days will have wondered what all-wheel drive was for on such a bizarre three-door vehicle and perhaps felt diminished in having to abandon the classic hatchback sedans for departmental duties.

In reality, the 4x4 had hidden qualities, which we will know, and was able to cope with the most massive off-road vehicles.

The Austrian bodybuilder Steyr-Daimler-Puch AG, also known for the vehicle equipment in the defense sector, put his hand to the simple mechanics of the 45 version (4-cylinder 903 cc) by making a transmission from the front transmission to the rear axle. A system that can be inserted by the driver up to 60 km / h which consequently raised the trim of the Panda. It was the first all-forward small car with a transverse engine to adopt all-wheel drive. 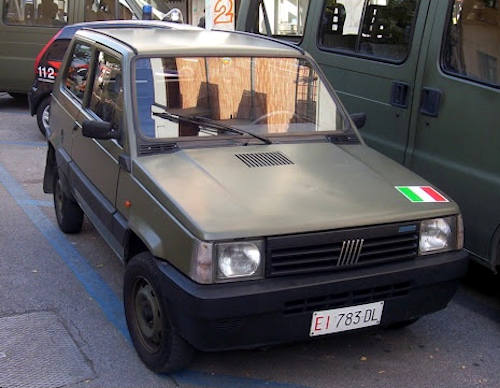 In the battalions the Panda 4x4 was the antagonist of the AR59 and then 76, but he never managed to take away the night inspection tour not being cataloged as tactical vehicle, but rather for extended promiscuous use. The Carabineri in the small mountain municipalities had certainly found in the Panda 4x4 an unstoppable service car, as well as the Finance Police for mountain border controls or the Polfer to climb the track embankments.

In fact, she could become the little sister of the AR

As already reported, even the most "operational" series in use by the Armed Forces of the Italian Armed Forces. it was actually cataloged as a commercial wheeled vehicle (according to the parameters of the Ground Armaments Directorate TERRARM). However, Fiat made an elaboration of project 141 (that of the Panda) to create a tactical vehicle Light one step lower than the Campagnola. His name was "Pandone". It was a bit bigger, wider and with an unusual engine for that model, a 1242 bhp 71 cc, the same one introduced later on the Fiat Sweaters, Jerseys and Cardigans. Only two presentation models were produced, and they were equipped with insertable all-wheel drive, self-locking rear differential with electro-pneumatic control, metal and non-resin bumpers, circular headlights, canvas hood (AR type), larger mirrors. , front and rear tow hook and homologated war lights Stan Ag NATO. 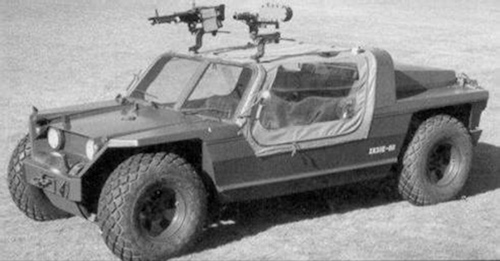 Too bad, however, that the Defense has not launched any order for this interesting variant which was not even produced in the civil version. Something similar also happened with the Lamborghini Cheetah (photo) e Fiat Over.

Its strength is far from the asphalt

Personally I could tell you about when I was a boy and used to go off-road with my Renault 4 on motocross circuits. No, I was not a flower child, but a simple enthusiast. Well, the Renault 4 as well as the Dyane 6 or 2 CV, were able to climb almost everywhere and move on the snow, thanks also to the center of gravity shifted on the front axle, which like the keel of a sailboat, the stabilized.

But what was their secret then inherited from the Panda? Well yes, lightness, just over 600 kg.

La Panda 4x4 followed the same logic, reaching a Ptt of 800 kg which is compensated by the addition of rear-wheel drive. A car capable of carrying out trials, albeit limited (no differential lock) off road, move on steep meadows, mule tracks, mud and snow or as a tractor, having regard to the couple with the crawler. The only attention in the furrows of mud and snow is not to let it "plow", in order to avoid flattening the body. 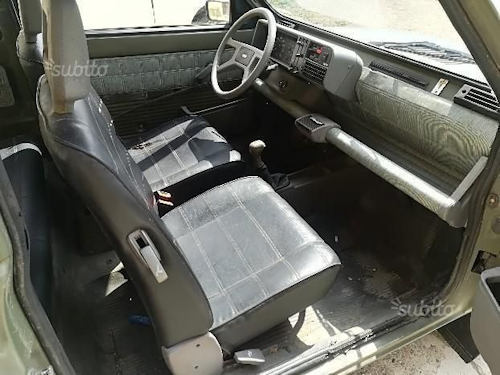 On the road it goes well and is quite economical, while the steering is not too precise although acceptable and the absence of the brake servo forces you to squeeze the pedal a little more. But there is much more ...

Let's not forget a special feature of the 4x4 which at the rear, like a real off-road vehicle, was fitted with a rigid bridge, leaf springs and coil springs. That is its five-speed gearbox with crawler.
In fact, with the 4x4 we started with the second, while the first was a real reduced gear for the most dramatic slopes where, like a small LINCE ("2", ndd) LMV, it allowed us to be surprised in very inclined passages. Apparently it was more casual than the Range Rover SUV.

The non plus ultra of Panda 4x4 was achieved with the Fire 1000 and 1100 CC engines of 50 and 54 hp, engines that have filed the carburetor and electro-carburetor systems in favor of an optimized multipoint injection. Breaking down the rear sofa, which in the first models was a kind of hammock (perhaps Giugiaro had been inspired by his Porto Cervo hammock), the rear volume contained 200 liters, while the maximum permissible mass for the 54 hp was 1200 kg. 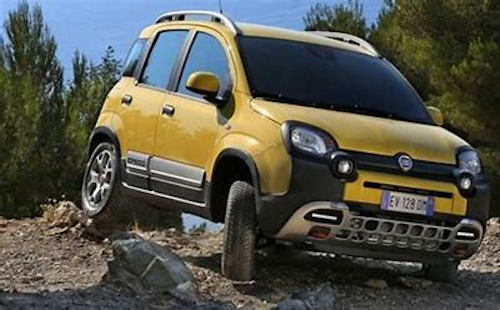 145/70 R13 snow-type knobby tires and steel rims with side bumpers accompanied the restylings of Panda, including military versions, over the course of its lucky years.

Even today the 169 and 316 series (the new Panda) are among the most successful small cars, while the evolution of the 4x4 has adopted the part-time kinematic system (i.e. front-wheel drive is used until a loss of traction is revealed on the rear) and more recently the “Torque on demand” combined with the function Electronic Locking Differential. A similar system is now also used in heavy tactics.

As previously written, among the supplies of armaments sent by the Italian government, there are also howitzers / ...
68665
Read

Apparently the Army of the Russian Federation is also bringing in the latest versions (dating back to the 80s ...
49357
Read

To circumvent the limitations imposed by Congress, the Biden Administration employs its allies to provide ...
19039
Read

No war can be interpreted and explained through the "absolute" and necessarily abstracting lenses of ...
4464
Read

If it weren't serious, it would even be comical. People don't realize the significance and implications that ...
18851
Read

Reuters reports that the United States will provide Ukrainians with long-range anti-ship missiles. If that were to ...
45876
Read

One of the modern fields of study related to learning is the one known as "serious games". Let's start right away ...
2465
Read

Last month we witnessed the sinking of one or more Ukrainian Neptune anti-ship missiles in the Black Sea ...
37513
Read

The Russian Airborne Forces (Vozdushno-Desantnye Voyska rossii - VDV) - like the vaunted Spetsnaz, by the way ...
29546
Read