German “Rent a Car” for Eurocargo, works well and offers opportunities. Is it a mirage with us? 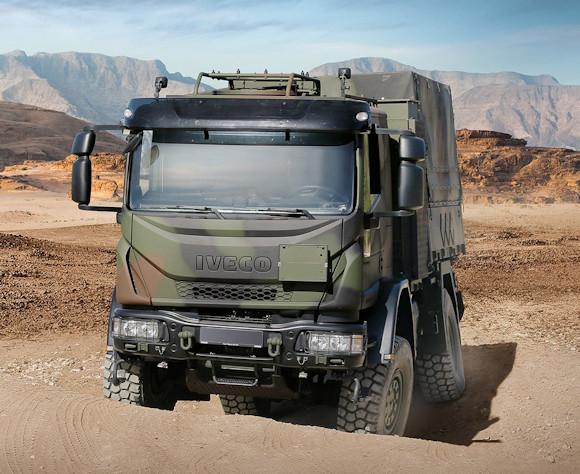 We have previously brought the Iveco platform into the spotlight Trakker, engineering and militarily revised, revealing the common points with Astra that confirm the natural structural predisposition for tactical and derived needs (see VTMM).

A similar argument should also be made for the smallest euro Cargo, a vehicle that is located on the border of the mid-range, that is the sector of the most “light” use which includes VM90 and LMV Lince.

Although the two-axle Astra ACTL primarily plays the role of a mixed truck operating in many Army barracks, it is euro Cargo often dealing with specialized tasks - tow truck, refrigerated ATP - when it is not structured as a simple box body or for the handling of medium modules. These are just some conformations derived from the civil series in use by the Armed Forces.

With a load range of up to 18 tons for the ordinary versions, the small Eurocargo can reach up to 26 tons of capacity in the versions with special platform and 4x4. As a whole it is a leaner and even more versatile structure that offers various ideas for the construction of other armored platforms with two axes, where, for example, the MMV 4x4, the first replacement for ACM80, came to life (following photo).

For the nostalgic of the ACM80 / 90, the vehicle that has made school a euro Cargo, we can argue that the potential of the historic medium truck was increased, modernized and transferred in '91 to the then newborn of the Iveco house. 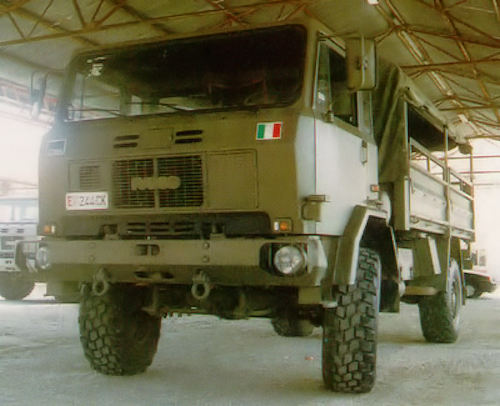 A basic difference between euro Cargo e Trakker / Astra - structure and engine apart of course - is that the Iveco average is exclusively a two-axle, against the two, three or four of the bigger brothers.

For the logisticians, Germany chooses Italy

The news of 2017 has passed somewhat muted in the media, in a context where the renowned international hub of Iveco Defense Vehicles has been operating for years with engineering plants in Germany, Iveco-Magirus in Ulm and in Brazil in Sete Lagoas . An operation that saw the sale of 280 150E28WS 4x4s to the German BwFuhrpark Service GmbH, a state-owned company that performs a really interesting service that we will see later. With the technical identification, reference is made to the 280 euro Cargo Unprotected 4x4s set up and equipped with a long-distance driver's cabin - presence of a berth - and a new arrangement and conformation of the seats, to which radio systems and an updated system are added CanBus (optimization of wiring and simplified electrical line diagnosis).

A civilian in green

The credentials of this batch of euro Cargo intended for Bundeswehr according to the information gathered, they have only the military livery since they are vehicles not used for operational use. In fact, although they have passed the tests in the Iveco DV military area, attesting to MB UNIMOG quality, the chassis and structure have not undergone technical increases or simplifications. However there are front and rear Stanag hooks, pneumatic trailer jacks front and rear, an interface twistlock ISO for tops and matt paints. 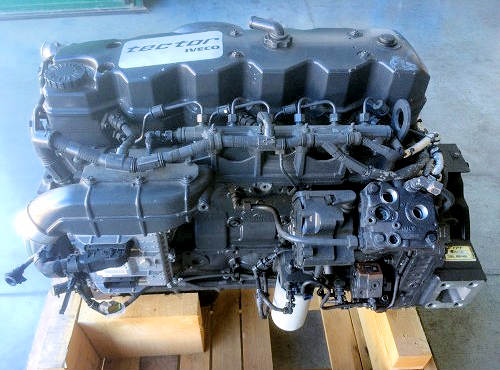 The engine of euro Cargo in question is a Tector 7 (euro 6) with 6 cylinders of 6,7 liters and 280 hp and 26 tons of PTT - Gross Combination Weight -, which Germany requested with manual transmission, although the Allison option with torque converter or robotized Astronic Lite6 AS 1000 is available. Interesting is the IVECO HI-SCR patented FPT Industrial catalytic reduction system, which for simplification does not use the EGR system for gas recycling.

Military vehicles for hire for the Bundeswehr

For certain types of vehicles, the German Army relies on a public company for the procurement of vehicles, strictly observing the concept of flexibility, cost / effectiveness, quality and availability 24 hours a day. The company BwFuhrparkService, where the 280 euro Cargo, therefore looks like a kind of full leasing able, just think a bit, to also provide the manpower for handling. In the fleet, in addition to Iveco, there are other noble icons of heavy vehicles such as SCANIA, MAN and Daimler AG, trailers rather than forklifts or buses, mainly used for the logistics sector, a sector that today more than ever, in the absence of conflicts , is gaining a crucial role for Western armies.

Opinion: with the Covid19 emergency, the numerous and effective logistical health structures activated by the army, and the recent appointment as extraordinary commissioner of the number one in logistics, General Figliuolo, underline the modern importance of this large sector of the armed force on which invest. 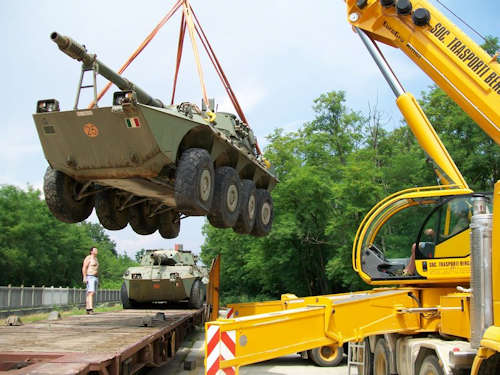 BwFuhrparkService seems like a solution that works and saves by expanding the specific expertise. A system that undoubtedly eases the work of soldiers by optimizing functions and assignments in the barracks. The German company is present with several branches in Germany and Luxembourg and has already had the opportunity to procure vehicles and materials in the UNIFIL, KFOR, EUTM / Minusma MLI missions etc.

Here with us there is no news related to "hiring" a topic that in some ways could embarrass someone, but which is also far from our healthy battalion memories, albeit the evolution of our Armed Forces. don't rule it out a priori.

Being able to understand the percentage of road transport entrusted by the Army to private carriers was not at all easy despite a sacrosanct right to information. But this too is perhaps already an answer. However, it is there for all to see, perhaps when we venture on the highways, to observe various heavy military transports being handled, despite the mysteries, by civilian articulated lorries.

Transport of tanks rather than sheltered modules, fuels or materials classified in ADR (accord européen relatif - transport of dangerous goods by road), are just some of the situations that can be encountered. According to some confidences, some personnel transfers were also entrusted to private buses. Something more can be learned from the "Technical Transport Specifications" published on the Defense website, where the Army Logistics Inspectorate - Movement and Transport Office (ISPEL - MOTRA) for the needs of the Army and Carabinieri. It cannot be ruled out that a perceptible confidentiality on the subject may have various explanations, not least a matter of organization or resources. 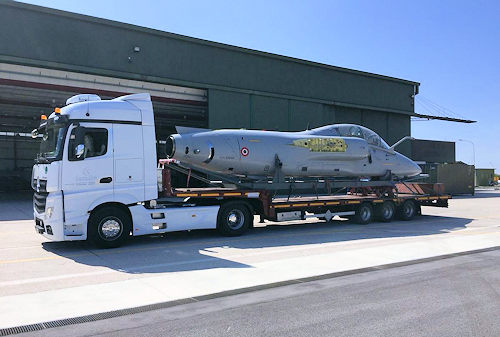 The military charter in Italy

Already in the early 90s in Italy, several renowned companies, not only multinationals, had relied on the concept of long-term rental as a guarantee formula for the total management and turnover of the vehicle fleet. A widespread sector that I know today, having worked there from a very young age for the delivery and maintenance of large sedans. Here, however, the German BwFuhrparkService, founded in 2002, seems to have acquired the well-established bases of full leasing, increasing and revolutionizing this concept, and also providing qualified personnel on a rental basis.

Adapting and simplifying the regulations on skilled work in Italy could open up new opportunities and outlets without too much difficulty. However, excluding the civil and local public administration, the rental of the vehicles seems to have some feedback on gazelles of the Carabinieri, according to what an elderly marshal told me. It is not difficult to think that a "full specialized leasing" could translate into an efficient optimization of costs and professionalism on a large scale, although the "excessive" interaction with the civil sector perhaps explains the resistance of the old military school, the one used to total management en casa of the sector increasingly undermined by economic cuts. This at least is one of the conclusions I have come to.

It is now clear that relations between Italy and the United Arab Emirates are at an all-time low. One of the last acts ...
397
Read

Definitely a multi-role light vehicle atypical for its VW Dune Buggy line that brings to mind a rival, the ...
1744
Read

According to various rumors, the Chinese government intends to restructure and expand a track of ...
5478
Read

Fincantieri CEO Giuseppe Bono announced on 10 June the signing of a contract with the Ministry of ...
8000
Read

With the entry into the COFS (Joint Command for Special Forces Operations) of the 4th Ranger Regiment and the 185 ...
7493
Read