Home Military world Means What future for the Trakkers? (Timeless ...

What future for the Trakkers? (Timeless Astra heart) 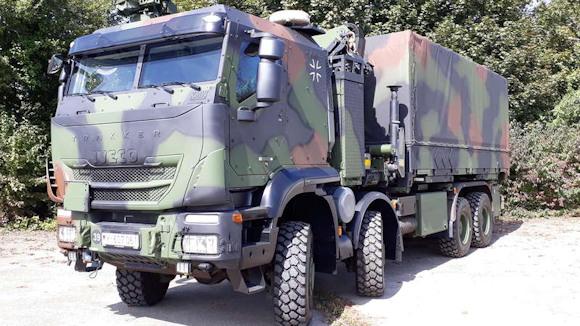 If last month it was the news of the sale to the Bundeswehr of the unstoppable truck Trakker to bounce for the most on the military news media, to keep him company in the heavy duty sector there is another. The presentation in Madrid during the WCM - World Class Manufacturing - of the new born of Iveco, the Stralis X-Way which, for now, has no military conformations.

In the story we will deal with news and insights on "his ancestor" Trakker, conceived from the development of the 330, a platform branded in its historical range, Fiat OM, UNIC and Magirus-Deutz, and then evolve into the more dynamic EuroTrakker and coming to the present day like Trakker. All vehicles also chosen to be militarized and really appreciated in the rest of the world.

GTF, excellent numbers with the Bundeswehr

This is an important supply of 1.048 Iveco trucks Trakker 8x8, those commissioned by the German army to the company of Bolzano for a value, according to rumors, of 300 million euros. The typology of Trakker required is GTF ie Geschützte Transportfahrzeuge, i.e. armored logistic tactical work vehicles, tested to resist CBRN and IED attacks, Improvised Explosive Device.

The cabins, like the sensitive points, are armored and equip different set-ups for logistic and technical assistance, with hydraulic cranes and roll-off systems for ISO standard 6-meter containers, as well as sophisticated integrated computerized on-board instrumentation.

There are no official news about armored versions with tank, but on a supply of a thousand copies one would think that they will not be all the same, given the confirmed tactical adaptability of the platform. Trakker. 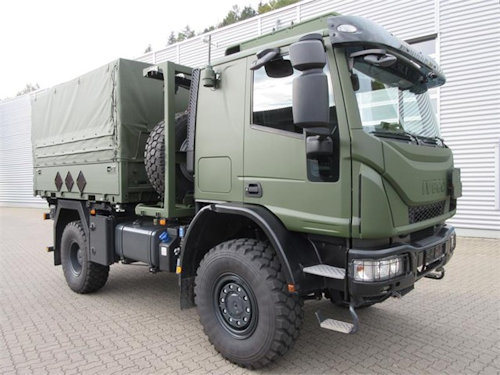 The collaboration operation between IDV (Iveco Defense Vehicles) and Germany (see Krauss Maffei Wegmann for Grizzly, German version of the VTMM) is no secret as is another major supply of several special trucks to the Bundeswehr, the 280 Eurocargo 4x4 (photo). Vehicles that have already been tested in the operational field outside the area, receiving good overall feedback.

If it is customary here to nickname some special vehicles nicely, in particular those that save your life, the military platform of Trakker proposed by Iveco, starts with a precise first name: AT 410T WM Trakker 8X8 with Armored Cab.

Looking at it, apart from the grandeur due to the vegetated livery and the armored windows, it appears as a traditional truck of the brand, even if inside there are several important variations, simplifications and waterproofing. The insiders dismiss the questions on the means of civil origin repeating, hastily, that it is a question of revisiting and strengthening the structure with respect to the civil alter ego. After all, what is mysterious is more interesting, don't you think?

The gearbox adopted is not the historical 16-speed ZF manual but the 16-speed EuroTronic ZF 2636AS16 WO system has been set up, also available on the civil version as an alternative to the manual. It is a robotic gearbox where the "opening and closing" command of the clutch for gearshifts takes place in an autonomy linked to different variants, such as road conditions, load and slope and subsequently transformed into impulses that flow into an electro- actuator provided that the conductor does not interact manually on the system. But let's face it right away, manual mode in general is not intuitive and in the end it is the automatic that takes over our intentions.

Il Gross Combination Weight, its Mtt (Total Ground Mass), is included on the basis of the conformations of this type, between 56 and 70 tons, values ​​that in the civil field would identify them as exceptional vehicles. The set-ups range from two standard seats - driver and machine manager - to 4 for system operators. Ballistic protection falls under the classification Stanag 4569 to which ADM and RCWS systems can be added as an option, basically a remote and interactive control technology.

The reference speed is 90 km / h. By-passing blocks are much faster, trust me. 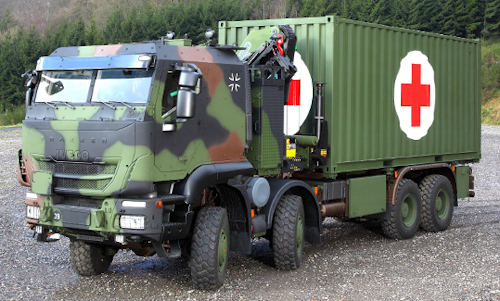 We have talked enough about robotic transmission systems set up on heavy vehicles and traditional automatic transmissions in other articles. On the other hand, it is interesting to report the most common opinions of a large part of military drivers and conductors, the real interested ones, in relation to robotic systems. They are comfortable and functional and would never return to the manual, but they do not spare any criticism either. It is in particular the uphill shifting that wastes time, especially when the gears are more than 8 and maybe you don't have much cavalry and you are loaded, but the sore point is always an excess of electronics, which is appreciated in the instrumentation but much less in the engine and control management. Conditions that excessively fade the natural symbiosis between driver and mechanical vehicle, not allowing, among other things, easy do-it-yourself repairs as in the past. Furthermore, the ECU-controlled system clearly deserves more attention than a traditional mechanical transmission.

Currently at the top is the gearbox I-Shift Dual Clutch of Volvo (double clutch) and later Scania Opticruise (Irizar bus and Trucks), 8 or 12-speed systems, but these considerations are generally destined to change as soon as changes are made in the various years of production by the various manufacturers.

Does ASTRA teach? The differences between Trakker and ASTRA 8x8?

The answer that comes from the quarry environment seems to be quite clear even from those who support Mercedes ARCOS, SCANIA XT or MAN TGS. Astra is unequivocally the most spartan and robust while Iveco is the most comfortable: it does not refuse asphalted journeys, but structurally it is a close, indeed very close, relative of Trakker. What should be emphasized is that the good Trakker is approaching its leave and will be replaced by the new Stralis X-WAY also produced in the Madrid plant and equipped with 9, 11 and 13 liter Cursor engines.

I leave it to you to understand if the strengthened platforms and traction bridges used for the military versions of Iveco, just to make a few references, are affected by “an interweaving of components” that preferably bear the Iveco brand on the international scene. "An established kinship" they respond when we ask mechanics or military to make a comparison between the titans of the heavy off-road, an answer that would support the characteristics and tactical versatility of the ASTRA platforms with spars in special high-strength steel with very high yield limits and with high torsional stiffness. A basic concept used by the two brands and by the way not unknown even to VTMM. So basically different logos and shapes, but the same structural refinements and components. 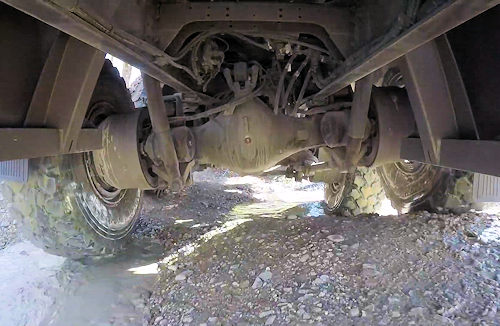 In the civil quarry versions the painting is less mysterious and the Trakker with three or four axles it basically has 6x4 and 8x4 layouts, even if there are 8x8 models around the world.

ASTRA HD9 Rigid, in addition to the frame Heavy Duty top of the range, it has traction on all axes. But there is more, looking at the brochures of Astra and Iveco and waiting for the debut of the new X-Way.

Astra civilian seems to blazon more platforms (trucks or road tractors) with 3 and 4 axles, while Iveco Trakker it can be configured with two axes (4x2 or 4x4). A fact that could make us reflect on company policy and - why not? - suggest that the two-axle Astra platforms, "the smallest", are mostly prerogatives for military use, see ACTL SM Standard Military 44.30 or some other 4x4?

Remaining on the subject of motion transfer systems, the innovative HI-TRACTION concept is interesting, which exploits a hydrostatic principle alongside the mechanical system. In case of need through an electric pump, pressurized oil moves impellers placed on the hubs of the axis not affected by the traditional mechanical traction scheme. A bit like construction machinery. Less weight, bulk and fuel consumption and a “softer” all-wheel drive only when needed. In short, an optional alternative reserved for the civil range of heavy vehicles from Iveco.

Militarily on a future and eventual military X-WAY, we hope to see more traditional schemes of mechanical transfer of the couple and frames clearly ... from Piacenza.

It is now clear that relations between Italy and the United Arab Emirates are at an all-time low. One of the last acts ...
109
Read

Definitely a multi-role light vehicle atypical for its VW Dune Buggy line that brings to mind a rival, the ...
1729
Read