Home Military world Means The Army on 2 wheels: The success of ...

The Army on 2 wheels: The success of the "Palpiando Irrompo" motorcycles 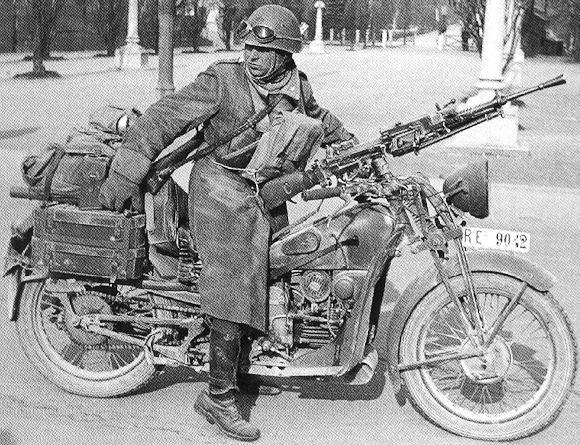 Fans recognize it for its regal passage accompanied by the music of its twin-cylinder engine, perhaps a V-shaped 850cc, but even the single-cylinder engines throbbed with a decisive and unmistakable sound and the double exhaust often misled the number of cylinders.

The bond of the Mandello del Lario company with the Armed Forces is strong, in fact, after a period at Isotta Fraschini as a test driver, Carlo Guzzi enlisted as an engine marshal in the Regia Marina and here he became friends with the air service pilot Giovanni Ravelli. Together with other motorcycle enthusiasts, the idea of ​​creating the Moto Guzzi Anonymous Company was born, but Giovanni Ravelli died prematurely in a plane crash in 19. However, the company came to life in 21 and, in memory of his friend Ravelli, the eagle with spread wings was introduced in the Moto Guzzi logo, similar to the one that naval aviators wore on the sleeves of their jackets.

Moto Guzzi began military collaboration around 1930 with the GT17 and GT20, but had already militarized some of its civilian versions for war purposes. The motorcycles of that period were all single-cylinder even though Guzzi had already produced a side V-twin 33 for racing in 500. 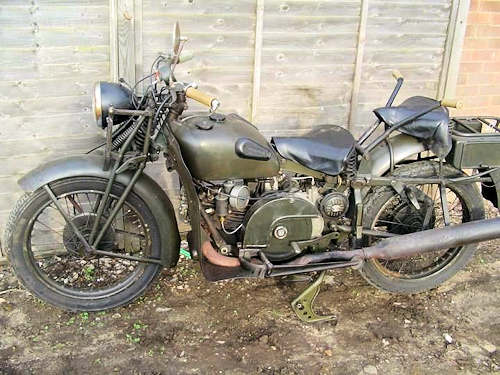 Guzzi still today has the historic privilege of an open channel towards the supply of motorcycles for the Police, but despite this guarantee it has always faced (especially for passion) to improve itself in the competitive and fierce motorcycle market, resulting in one of the undisputed world icons of two wheels.

It was the first grand touring motorcycle to enter the barracks with its single cylinder of 500 cm³ of 13 hp with distribution by rods and rockers. The gearshift was manual three-speed with multiple-disc clutch and a two-seater was also produced. According to the assignment department, it was prepared for the transport of a 6,5 mm Breda rifle or machine gun and, according to what we learn, it accompanied our soldiers in the war in Ethiopia. It was replaced by the Guzzi family I raised, certainly more performing.

Nice choice of the names of the Guzzi models with chameleon I raised conceived in 1938 for military use and from which they are derived I raised V (a middle ground of restyling), theFast Elk AV which became SA, ie Super Moose and the Tri Moose a three-wheeler. In addition to the new specialties of the Bersaglieri motorcyclists, it was assigned to all the regiments as a reconnaissance and column guide vehicle. The two rather long seats had a second rear handlebar for the transported person who did not have to support the driver while maintaining an operational set-up. 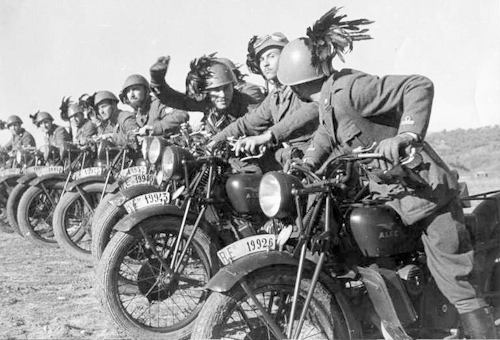 The most recent versions of the Super Moose they no longer have the gear lever but the rocker platform appearing closer to today's concept of motorcycle.

The technical scheme partly echoed that of the GT20, but the news were different. A horizontal 500cc engine with the classic external flywheel delivering 14 hp.

The multi-plate clutch was lubricated by oil vapors and the gearbox was 4-speed and the leg protector was introduced, also a novelty.

To allow the use of less refined petrol, the military versions had a lower compression ratio.

THEI raised it immediately proved very robust thanks to its frame that was put to the test during the Second World War in the Libyan desert and in the freezing Russia by our biker Bersaglieri. In fact, as early as 31 the 2nd Bersaglieri Regiment in Trastevere had an experimental motorcycle company with three operational platoons plus one for command and service. His motto was eloquent: Throbbing I burst.

In addition to Gilera and Frera, the bikes in this case were the single-seater Guzzi Alce 500 for which the figure of the gunner was born, a specialty within the specialty. His prerogatives had to concern a wide competence in weapons and as a reconnaissance, as well as strong motorcyclist skills. 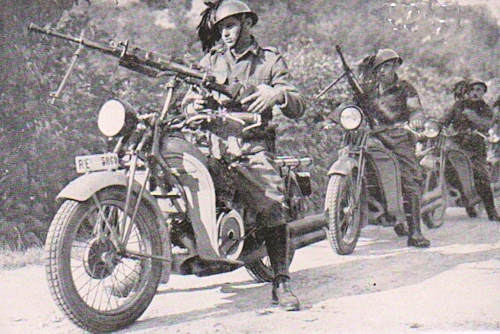 Although the shoulder rifle was impractical and created problems of balance and slowness in use, a support was created on the handlebar to fire at a standstill and the company of Bersaglieri became a real elite of the royal army able to arrive quickly surprise in enemy trenches and fire from cross strategic points.

It was the end of the 80s and in the vehicle warehouse of my transmission battalion I am sure there were, under a sheet that partially hid them, at least three Guzzis. I didn't dare to discover them but from the rear fender I deduced that they could be Falcone o Heron, I think the first though.

Il Falcone it was born after the war as a replacement for the GTW but, militarily, it replaced the glorious Elk. Even the Falcone fitted the single-cylinder with 500cc horizontal rods and rockers and the gearbox was by now a consolidated four-speed pedal. This motorcycle did not enter the civilian market perhaps due to the competing diffusion of smaller and faster engines, but in the military and police forces it was much appreciated so much that in '67 Guzzi made a restyling proposing the New Falcone with continuous updates: the flywheel disc is covered and the dry oil sump disappears, while in the civil series the electric starter and the tachometer are added and its declared speed is 140km / h.

The cuirassiers regiment of the Arma, in addition to I raised, Super Moose, Goshawk, also used the Falcone and later v7. 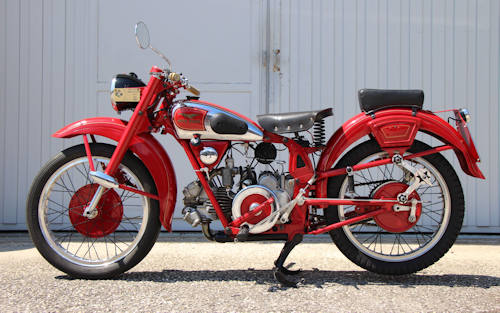 Guzzi too Heron (photo) in 52 it had an interesting military history while distinguishing itself from the previous massive war production for having a displacement of 250cc. 29.926 units were sold (source Moto Guzzi).

The 7 cc and 700hp V50 series had an innovative line created by the engineer Lino Tonti with a V-twin engine, the civil series debuted in '65, before the military version, and developed the versions California, Sports e Special gaining acclaim all over the world.

Curiosity - in '75, perhaps to make even more inroads into the stars and stripes market, the Mandello del Lario house built the V1000 I-Convert, the first European motorcycle with a torque converter, clutch and two manual gears: to all intents and purposes a semi automatic of the period. Very fast 170 km / h, but with very little engine brake. Guzzi remedied by upgrading the braking system with Brembo integral braking.

You will have understood that the two wheels contributed to the motorization of the Italian Army alongside the first OM 36, Fiat-SPA CL39, Lancia Ro motor vehicles, so much so that in 1927 the Automotive Technical Inspectorate of the Royal Army was established. However, the use of motorcycles underwent a drastic contraction after the Second World War.

Hundreds of motorcycles were parked in the barracks' cars, gradually replaced by cars and vehicles for mixed use. On the occasion of external exercises or liaison services it was possible to meet some small van with officers on board rather than soldiers who carried out the mail tour service.

Almost all of them were sold in calls for tenders because the operational needs of the conscript force had radically changed. Already before the 70s, the most circulating vehicles were the ACM 52, ACP 62/70, ACM80 / 90 trucks and the Fiat AR59 / 76 jeeps. Only in 50 did Guzzi create the Mechanical mule (see article), a tricycle that was actually impractical, heavy and in many ways useless on narrow mule tracks.

With the advent of digitalization and the internet, even the mail tour service disappeared and in the nineties motorcycles remained a memory like the motorcycle companies, even if ...

The German Leopard 2 tank is one of the military vehicles requested by Ukraine to face the Russian offensive...
6539
Read

"While war is changing, France has and will have armies ready for the dangers of the century", these are the words of…
2817
Read

Germany stubbornly does not want to deprive itself of its tanks. Despite weeks of the campaign "Let's free the...
78694
Read

As international attention has been drawn to the war in Ukraine, tensions have risen in the Balkans…
4001
Read 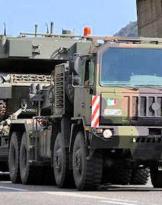 Are there really no drivers? The answer must take into consideration two aspects of the profession: with how much...
5647
Read

On December 16th, with a statement that had actually already been in the air for some time, the Japanese Prime Minister Fumio...
8772
Read