Home Military world Means The Vespa was also an anti-tank

The Vespa was also an anti-tank 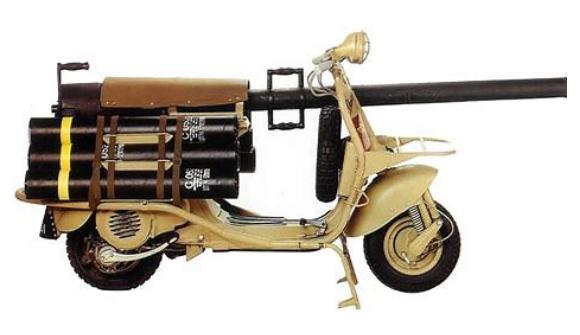 Before telling you about a glorious and "atypical" two-wheeler that has never seen our squads, let us recall with some embarrassment that even the Armed Forces have made some "flops" on vehicle purchases. Among these there was also a "tricycle", which unsuccessfully wanted to supplant the friendly and faithful mules. It was the Guzzi 3x3 mechanical mule adopted by the Alpine troops and with a refined and enviable traction system on the three wheels and a considerable weight, 1000 kg. But if we look around the Piaggio house we will find some surprises ...

In fact, apart from the twin-engine turboprop P180 aircraft, the Pontedera company has created a winning tricycle, the legendary Ape followed by its derivative, the Piaggio. Poker, a quadricycle. Instead, it was the surrogate Porter, a four-wheeler, however, to wear the stars in the Air Force and, just think, to be developed in an armored version for the Meritorious as a replacement for the Fiat 900 T. "Who knows what road holding ... " 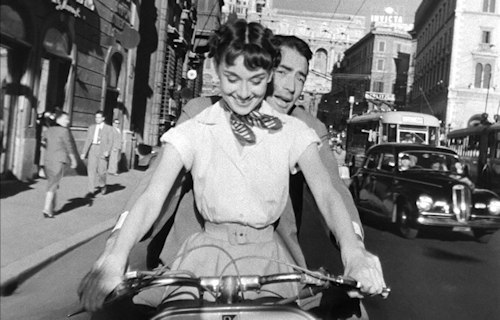 The Piaggio brand was among the first to power Italy with its two-wheelers, after the presentation of the Vespa in Turin, which took place on 24 March 1946. A vehicle that quickly became the motorcycle or, if you prefer scooter, most famous in the world, selling millions of copies.

A bizarre "motorcycle" with an unmistakable noise and suitable for lazy people who did not have to climb over the saddle to get on it, or just right for ladies with long skirts.

A very practical and robust vehicle, with wheels screwed to the rim without spokes and a tireless single-cylinder engine with a chainless transmission, an absolute novelty.

Its soft line recalled the characteristic insect, despite being inspired by aeronautical fuselages. Perhaps it was a bit uncomfortable or indelicate to associate it with a motorcycle due to the presence of the bodywork instead of the fairing or to solutions naked weather.

The harmonious shell that housed the engine compartment and the rear wheel continued into the footboard and then into the front shield, a detail similar to scooters. For this reason the English market gave it the nickname scooter, from the verb "to scoot", skate. 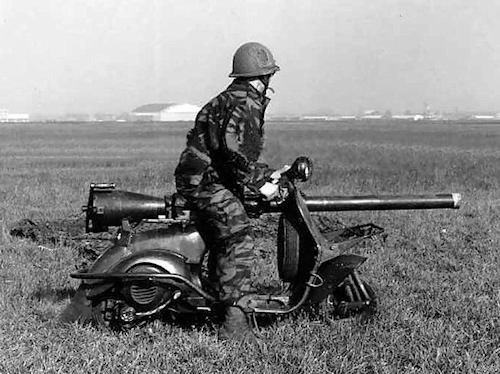 The Pontedera motor scooter soon became famous also in cinema films, where freedom and light-heartedness was almost always associated with driving a Vespa. There was never a military baptism, although Piaggio converts its production during the two world wars for war supplies, also giving life to the P32 twin-engine aircraft.

I don't think the idea came to the French cousins ​​after a night of champagne, but the Vespa was militarized in all respects outside the home, becoming a real tactical vehicle with anti-tank weapons.

In fact the Ateliers de Construction de Motocycles et Automobiles, better known as ACMA, a company associated with Piaggio for the assembly of components, it revolutionized the peaceful concept of the Vespa, elaborating disturbing and bizarre modifications to the structure.

During the Indochina War in 50, the Armée de terre it needed an agile vehicle for the transport of anti-tank artillery and capable of being air-launched by the C-119 Boxcar of the US allies. France was defeated by the Indochinese conflict, but repeated the experiment in Algeria and here the Vespa 150 TAP was able to be appreciated.

Specially colored in desert livery or dark green, the TAP model (Troupes Aéro Portées) supplied to the paràs, it was set up on the commercial version 150 from which they took life in two distinct years, the 56 and the 59 with a displacement of 150 cc. 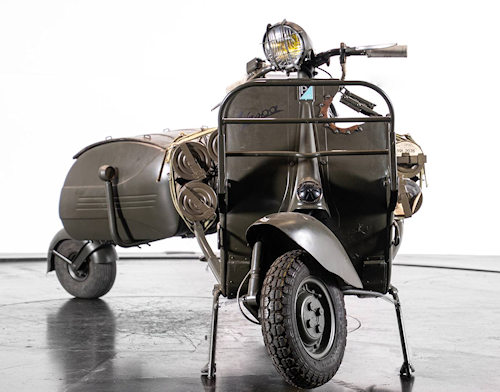 The Vespa 150 TAP was intended to be used as a tripod for the 20 mm recoilless M75 cannon that housed under the saddle, but it seems that it is a legend to be able to fire with the weapon housed in its transport seat.

The TAP version came to life with the modification of the Vespa 150 and involved important structural reinforcements, the adoption of a perimeter bumper that also acted as a handle, steel protections for the engine casing and muffler, adapting it at the same time to the shock of an air launch. Some parts of the bodywork were reduced, such as the mudguards, to make it more suitable for dirt roads. The roof rack in front of the front shield contained two tanks, while six bullets were fixed along the sides of the structure.

Its empty weight stood at 115 kg and its long saddle could carry two soldiers, and a trailer supported by a single-wheel trolley was also provided. The engine was the characteristic two-stroke with 2% mixture that pushed the Vespa at 60 km / h with a range of 200 km and its gearbox was with the characteristic three-speed knob control and shift gears with wet discs. 'oil.

The Algerian sands, however, created some problems for the small wheels and, in some places, it was necessary to go down to drive it by hand.

The use of the M20 cannon on the Vespa TAP was chosen to enhance the tactical role of the anti-tank Vespa. In fact it was light and well manageable even if outdated, but above all able to pierce armor in the order of 100 mm, like those of the T-34 tanks.

The Biden Administration continues to supply the Ukrainians with artillery. After the 155 mm M-777 howitzers and, news ...
1547
Read

As previously written, among the supplies of armaments sent by the Italian government, there are also howitzers / ...
71492
Read

Apparently the Army of the Russian Federation is also bringing in the latest versions (dating back to the 80s ...
49730
Read

To circumvent the limitations imposed by Congress, the Biden Administration employs its allies to provide ...
19450
Read

No war can be interpreted and explained through the "absolute" and necessarily abstracting lenses of ...
4579
Read

If it weren't serious, it would even be comical. People don't realize the significance and implications that ...
19373
Read

Reuters reports that the United States will provide Ukrainians with long-range anti-ship missiles. If that were to ...
46082
Read

One of the modern fields of study related to learning is the one known as "serious games". Let's start right away ...
2484
Read

Last month we witnessed the sinking of one or more Ukrainian Neptune anti-ship missiles in the Black Sea ...
37596
Read