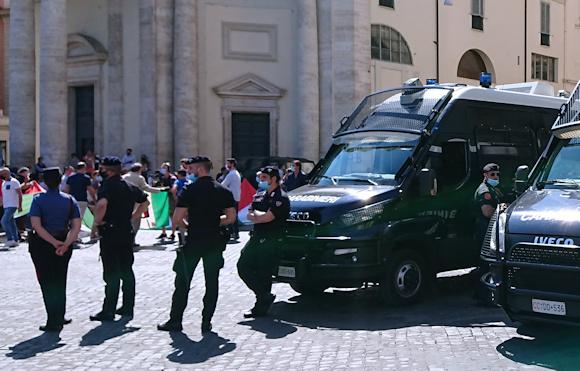 Really well known as a reliable commercial vehicle, Iveco Daily is also a historic work vehicle for the security forces. Since 1978, the year of its debut to replace the Fiat 616, five generations of Daily have followed each other until today, forty years of simple technology set up on a platform from which different derivations and fittings still depart today, including including military ones.

However, it cannot be attributed to him an Anglo-Saxon operational acronym because his name is already clear.

It is a special issue of Daily reserved for law enforcement agencies for use in PO (public order) tasks. The memories of those who made the lever in some battalion of the weapon will not fail ...

Homeland Security, that is "national security", a name apt for this line that proposes itself as a faithful collaborator in restoring order during riots or violent demonstrations, but also because inside there is a security cell, or rather "a cage ”, Which operators call grids, a space to protect the transported. 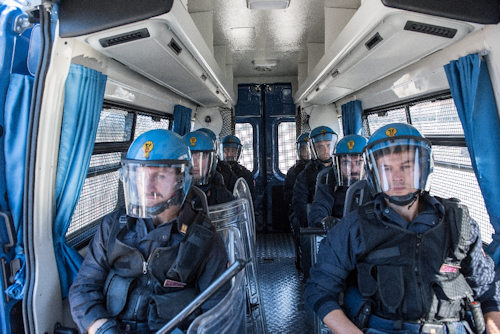 It does not fall into the type of vehicle armored, armored vehicles, rather we could speak of a Staff Carrier special if we really want to give him a NATO tactical nomenclature, despite the fact that many of us still identify him as the cell phone of the Carabinieri or the Police or more generically a "truck".

There has been much discussion, particularly in the 70s, if the DNA of the vehicles used by the police, for example Giulia, 1750, Alfetta, Alfa 33 1.7, had passed under the able hands of a "Dragon" capable of "Fixing" the natural performance of the Biscione cars, but albeit with a special role, Iveco Daily Homeland Security, leaves the normal commercial production lines of the New Daily. In a configuration that falls into the minibus category because of its 10 seats (8 + 2), it is always adapted by Iveco in collaboration with specialized fitters in relation to the requests for use and, precisely because of its civil origin, it is not compatible with weapon systems.

It is equipped with a 4-cylinder four-cylinder F1C turbodiesel euro VI D 3.0 cc engine and delivers 132 kw, 180 horsepower at 3.500 rpm. Its speed is 130 km / h while the transmission is 6-speed manual or, on request, automatic. With these characteristics HOMELAND SECURITY is produced in two sizes of 6300 and 7470 mm, but it is curious to report that on the market it is distinguished in the two versions in relation to the distance between the axes (the pitch between the two axes).

Arma dei Carabinieri and Guardia di Finanza are customers of the 3520L, where L means long rear overhang, while for the State Police the longer 4100mm version is reserved, in this case with shorter overhang. 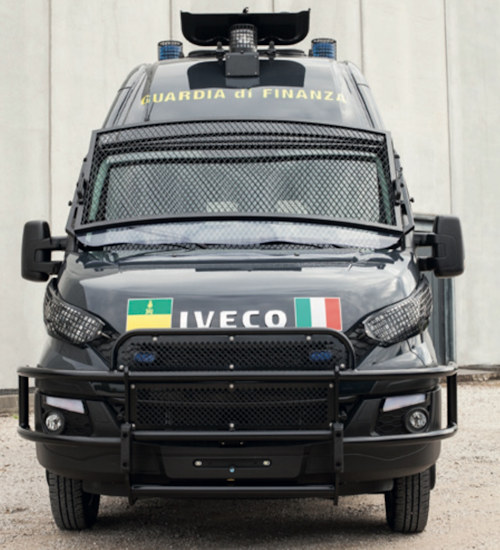 Independent suspension on the front axle, on the back there is the traditional rigid bridge associated with shock absorbers with air springs and twin tires, a traditional scheme for a 4x2.

We consulted the Guardia di Finanza, which confirmed the more technological nature of Homeland Security compared to the fourth and most popular series Daily, called 50E C17 or C18, where 50 represents the PTT (total weight on the ground), C which is enclosed while the subsequent numbers are the powers.

The introduction of a telescopic grille with a motorized pantograph controlled by the cab to protect the windscreen is interesting, while the other dense mesh grids are fixed even though there is an opening on the side superimposed on the window. The automatic descent of the grill, a bit like a medieval hiding place, already represents a certain deterrent but also a convenience and safety for the operator.

The set-up includes software for acoustic and visual devices but also unbreakable and pneumatic glass run flat in addition to a fire extinguishing system, air conditioning and heater Webastoelements consolidated also on civil minibus versions, to which are added optical groups, flashers and protected search lights, as well as the control hatch on the roof with retractable ladder.

Frontally there is a bull bar to repel obstacles during the riots, but the psycho-behavioral preparation of the staff is fundamental, just think of the psychological stress of the operators when hundreds of protesters attempt to overturn the vehicle or set it on fire.

Even if there are 4x4 "cage versions" with the performance and technique of the Daily 4x4 civilian, the eye will certainly have fallen on the first detail shared by the military MUV 70/20 (following photo). Home Security, the front and the cabin. It should be remembered, however, that the military production of the MUV has nothing to do with the Iveco Daily commercial vehicle, much less with the fifth series New Daily and Homeland Security. 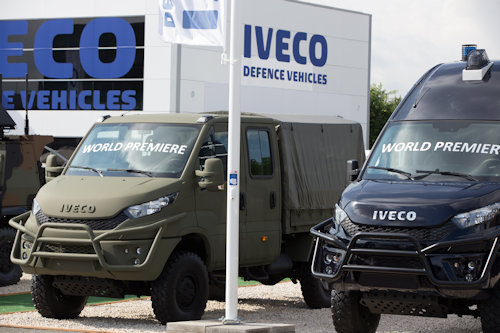 Many readers will be skeptical, but remember that the MUV was born with a special and specific platform created for an average multi-role tactician that only in terms of size and opportunity can be traced back to the commercial range of the van Daily. It cannot be excluded that the MUV can be set up with a passenger volume different from the Daily according to the client's requests.

At this point, would you be groping in the dark with criticism without having an indication of the derivation? Even the referable VM90, the Multirole Military Vehicle, albeit much older, is combined, like all Iveco military vehicles production, with the same concept of technical specialty and structural superiority, characteristics different from the commercial ones that follow particular tests and trials , a topic we will cover.

Sabotage and reliability, we talk about it with the carabinieri

In Beijing in Tiananmen Square in '89, a daring boy whose name remained unknown appeared in front of 4 Type59 tanks in a row, succeeding in stopping their advance in that case. In our day and in our country an event of this type is not conceivable, but sabotages during the performance of the OP services are always possible. To avoid them Homeland Security seems to have a few tricks up its sleeve dictated by experience in the field.

We asked a veteran for the services of Public order, Rocco, 38, pinned by the Arma with 17 years of service.

What are the main rules during deployment?

Synergy between operators plays a fundamental role. Checking themselves, but also the other teams is a rule that applies both to operators flying over the area with helicopters and drones, and to the police in the square. 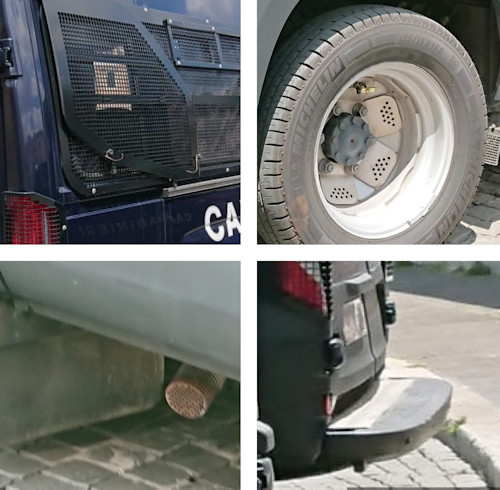 Does experience teach about sabotage?

Smokes from the sticks, flour, paints or adhesives thrown on the windshield represent a barrier to safe progress, but also the exhaust pipe of the "grilled minibuses" can be an objective area for the most difficult. In fact, introducing material into the muffler terminal would suffocate the engine by turning it off. The filter at the end of the tube serves precisely to prevent this.

Even in the aesthetic holes on the rims to lighten the structure and dissipate the heat, steel bars can be introduced that would fit with the brake caliper blocking the wheel. These passages are then covered with impenetrable perforated plates.

What if you get surrounded?

The vehicles must always be behind the tortoise line, nobody can get close, but if the blocking of the differential happens it can represent a salvation.

When trying to lift a drive wheel to stop the vehicle or maybe overturn it, by inserting the block we can move and give up on the attempt.

A last question. I guess it's unnerving to stay hours in the sun at 40 ° in a dark blue vehicle?

The Daily is equipped with two air conditioning systems, one for the cabin and one for the passenger compartment running with the engine running, however there is a small fridge for drinks.

We have thus briefly described the sensations felt by our soldiers called to restore order while revealing some curiosities.

Clearly when the situation becomes incandescent and the command authorizes it, the Arma uses in support the RG-12, a 4x4 APC - multi-purpose armored personnel carrier - armored and much more sophisticated, while the Police the Eurocargo ML100E21 4x4 (in the image below behind a Daily 4 series).

I would like to thank the availability and courtesy of the press offices of the General Command of the Carabinieri, the Guardia di Finanza and the State Police for their promptness in providing the information requested.

It is now clear that relations between Italy and the United Arab Emirates are at an all-time low. One of the last acts ...
560
Read

Definitely a multi-role light vehicle atypical for its VW Dune Buggy line that brings to mind a rival, the ...
1758
Read

Fincantieri CEO Giuseppe Bono announced on 10 June the signing of a contract with the Ministry of ...
8005
Read

With the entry into the COFS (Joint Command for Special Forces Operations) of the 4th Ranger Regiment and the 185 ...
7498
Read