Home Military world Means Inside the carabinieri shelters. Between ...

Inside the carabinieri shelters. Is there also UNIMOG among the post VM90 multiroles? 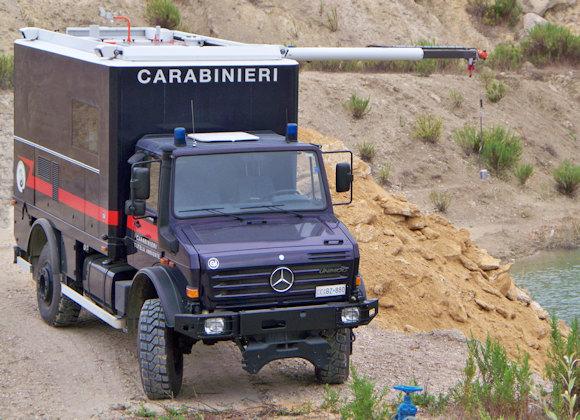 The gradual introduction of the J8 will support and lighten the work of the VM90s a little, pending a tender called by the Defense to identify who will be the replacement of the M40E15-WM and relegate it to the well-deserved auxiliary. This despite the most recent versions of a valid 80s project, are still able to offer an operational service.

The international offer of "mediums" certainly does not lack opportunities, but I believe our non-commissioned officers and graduates should be the first to give the green light to a medium that is suitable and versatile not only on paper. We do not know who will be the candidates who will present themselves for the announcement, but alas the times are over when the contenders in the race were real Italian jewels like Alfa Matta 1900 AR / 52 or AR 1101 Campagnola (v.articolo).

Doing some research it is not difficult to come across interesting medium multiroles: the Indians of Tatamotors Defense Products, the American Oshkosh, which however produces only the Armored series, rather than the Renault with Sherpa-light or the Turkish Otokar.

Our Multirole Military Utility Vehicle Will 4x4, the MUV, be the best and most favorite? It should be noted that Italy has nothing to learn in the military production of vehicles appreciated all over the world, so we hope that everything can be concentrated on the functional, use and convenience aspects as well as, without euphemisms, in the interest of its users.

Unimog of the carabinieri 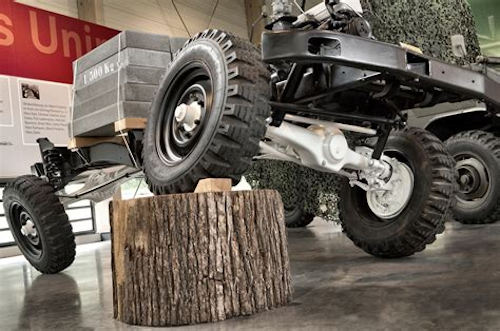 The well-known Mercedes specialist brand dedicated to hard work on rough terrain also falls into the average audience of multi-role vehicles. It is the historic Unimog - Universal-Motor-Gerät - which under this name presents several variants set up on a single multi-role off-road platform. Someone, to simplify, wanted to nickname it the German VM90, but in reality this is not the case.

In fact, the Unimog platform is a step higher in terms of range and level than our M40E15-WM and, to make a quick comparison, we could argue that it is a small pickup truck whose dimensions are closer to the Light Multirole Vehicle LINCE, while the structural concept and mechanical recalls Iveco's MTV - MEDIUM TACTICAL VEHICLE (type 4x4 sold in Holland) or the old ACL75.

The Unimog structure is clearly a load-bearing spar with two rigid bridges, springs, and a sophisticated elastic push tube technology capable of articulating and oscillating the axes up to 30 degrees. Even the volume of its engine has little to do with the VM chameleon, if anything the parallel with the vuemme would be more appropriate with the G Class of the German house. An undoubtedly prestigious comparison that our VM deserves everything.

The Arma dei Carabinieri has chosen well, but not to replace its VM90s, rather to offer an environmental protection service. In fact, it has three Unimog trucks equipped with shelters with sophisticated laboratory equipment for safeguarding environmental health even in the event of risk from atomic radiation. 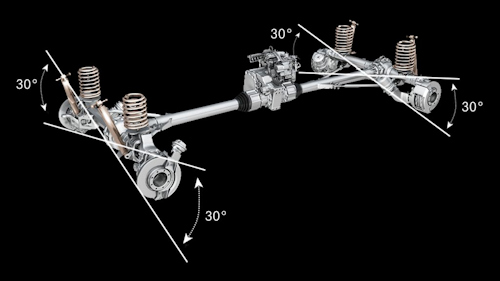 Before entering these shelters assembled on civil Unimog trucks it is interesting to focus on costs. The variants of the civilian price list, reach up to a capacity of 18 tons and, the U4000 4x4 4.8 TD Euro 5 version, costs just over one hundred thousand euros. A similar cost, to make a comparison, concerns Eurocargo 4x4, while the smaller Daily 4x4, also civilian, has a price of about 68 thousand euros.

The tactical military production chain, depending on the modifications and special reinforcements that go (for derivatives) beyond the top of the civilian range, understandably raise costs per unit, a mandatory step in particular to align with NATO military standards of use. of other productions.

The means of the weapon for the defense of the environment

A constant commitment guaranteed by the Carabinieri, to monitor land - see the Land of fires - rivers, lakes where there is a proven suspicion of silent pollution covered by the underworld (and by silence). All conditions where the mobile shelters of the Arma play a crucial role for public health as well as for the environmental and subsoil affected by chemical aggression.

For this important function, which if it were not there would quickly decimate the fertility of huge areas of our country and related fauna, the carabinieri for the Protection of the Environment they make use of various specialized means, but it is the UNIMOGs who transfer their sophisticated laboratories directly to the place of the emergency.

We enter the shelters 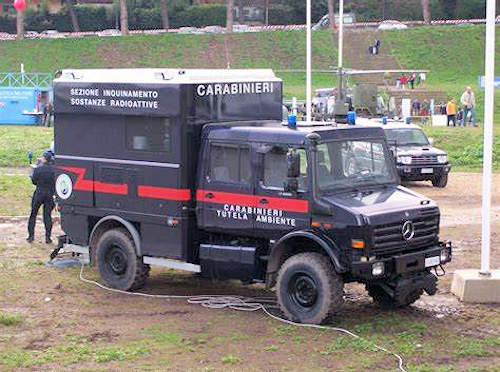 By courtesy of the Arma, we offer you an orderly and preview of the descriptions and functions of the traveling equipment set up on the three vehicles.

Mercedes UNIMOG vehicle mod. 5000 used as a mobile laboratory for the execution of the following radiometric analyzes and measurements:

Two Mercedes UNIMOG vehicles mod. 3000 used for the execution of expeditious measures by: 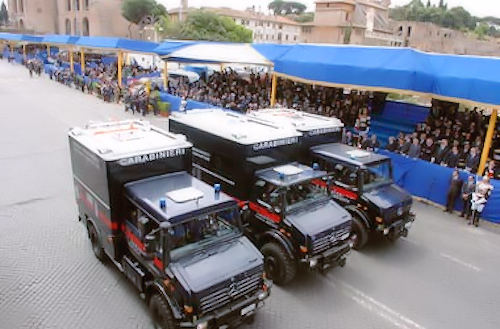 Portable instrumentation is also provided on board the mobile laboratory and the support means for carrying out measurements on type radiation alpha - beta - gamma and neutrons executable in the field.

The vehicles are equipped with individual protection systems (masks - overalls - gloves, boots) capable of protecting personnel both outside and in case of need even inside the vehicle. The vehicles are equipped with collective protection systems (shelters) which, by means of NBC-type filtering devices, maintain a sufficient overpressure inside to guarantee non-contamination of the internal module.

The type of vehicles has been designed to provide valid support in areas called "lukewarm" or in those areas where it is most necessary to perform monitoring for the detection of any contamination from radioisotopes, both as a result of technological accidents and due to unconventional actions .

In detail, all three vehicles can operate on any terrain and have been designed using the protection techniques valid in the NBC-R field, giving greater depth to type "R" (radiological) problems. The equipment used is mainly detection instruments with radiometric sensitivities capable of providing answers to the various levels of contamination and / or radiological exposure.

The mobile laboratory is able to provide analyzes on the most known radioisotopes used in the industrial field (cesium 137 - cobalt 60 etc.), as well as to perform on-site sampling to be sent to civil and military structures for the execution of more in-depth radiometric analyzes.

It is now clear that relations between Italy and the United Arab Emirates are at an all-time low. One of the last acts ...
379
Read

Definitely a multi-role light vehicle atypical for its VW Dune Buggy line that brings to mind a rival, the ...
1741
Read

According to various rumors, the Chinese government intends to restructure and expand a track of ...
5477
Read

Fincantieri CEO Giuseppe Bono announced on 10 June the signing of a contract with the Ministry of ...
8000
Read

With the entry into the COFS (Joint Command for Special Forces Operations) of the 4th Ranger Regiment and the 185 ...
7493
Read