4x4, news and tips to face the "General winter" 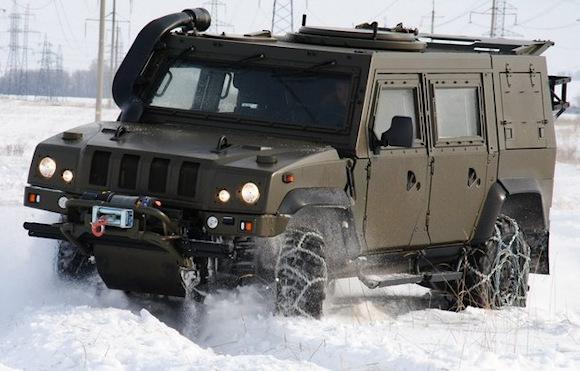 Simple or refined, but certainly useful for the safety and mobility of the vehicle, four-wheel drive systems are a complicated sector even in terms of abbreviations. The older ones will tend to associate 4x4 vehicles with the military or commercial world and, in the barracks, they will remember in addition to the gear lever, that of the gearbox, the traction transfer and the differential blocks, perhaps with the faded initials imprinted on the knob.

Together with the shouts of the marshal, they were undoubtedly vehicles that formed a conductor assigned in spite of himself in the assignment 18A.

After the war use in the world conflict, it was the ITALCON mission that marked the efficiency, but also the limits of an indigenous army, before the chameleon and gradual restructuring that began in the 90s. A period that marks the gradual transition to a different hierarchical mentality and to an organizational reorganization that also involved means, armaments and materials. We begin to enhance the wheeled vehicle with respect to the tracked vehicle and with the new century the concept on demand with three differentials (debuted with Lancia Delta HF - High Fidelity - in the 80s) replaces the many levers we knew.

Overlooking the abbreviations, the integral tractions can be equipped with mixed systems, or part time o full time. Mixed systems actually embrace the concept part time o full time in relation to the sophistication of the system. I would also add the traditional mechanically insertable system, albeit in disuse, the one equipped on the tactics of our memories, SPA TM40, AR59 / 76, ACM etc ... 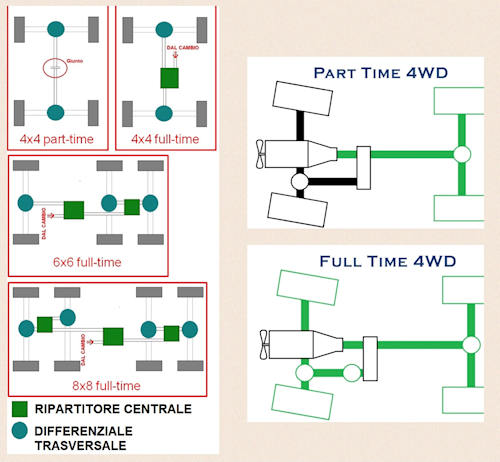 In part time, the torque is generated only on one axle and, only when a wheel of this slide, the traction is transferred with a distributor (lamellar clutches or epicycle) to the second axle. In full time - the most sophisticated -, traction is permanent on all wheels (detail included in the latest VM90 series and on the whole modern rotated tactical range) with variable torque percentages thanks to a third differential, generally with Ant and Post ratio of 40:60 or 30:70.

This mechanism interposed centrally, also avoids torque contrasts and, in specialized vehicles or in use by the Armed Forces, it is lockable. This means that on low-grip terrain, the torque output from the engine is distributed at 50% both front and rear. The important thing is to intervene by unlocking this function as soon as you return to the ground with a stable bottom.

But that's not enough, in fact, together with the third differential lock - unknown to SUVs - it is often combined with the presence of reduced gears, a custom for military vehicles. With the blocked axles you feel greater resistance on the engine, and this forces us to increase the throttle, while with the even more refined four-wheel drive systems, you can get the vehicle to move even when only one wheel has grip.

If, with the central differential locked, one of the two axles continues to slip, for example in the twistit is possible to lock the differentials (transverse blocks) of one or both axles, either manually or by means of the electronic wheel rotation detection systems (optional detail on commercial vehicles and standard on military vehicles).

On modern tactical vehicles, there is a switch selector which, in relation to the criticality of the route, allows the gradual passage from the simple standard on-demand gear up to the longitudinal and transverse blocks that activate the epicycle for reduced gears when the ground it becomes more impervious or inclined. 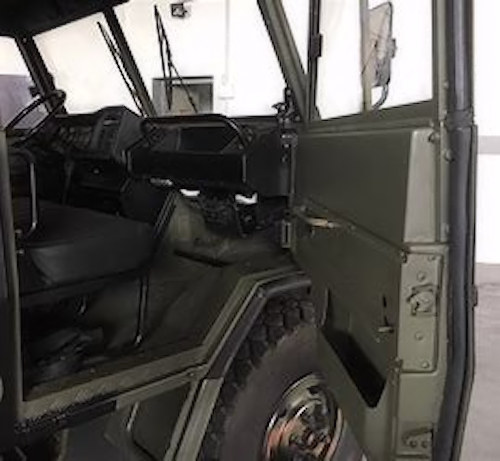 It is good to remember that on low-grip terrain it is counterproductive to have too much torque on the wheels, while in certain conditions, "digging" to reach a surface with more grip can make a difference. The modern motorist or driver acts only through a button that activates the traction systems by electromechanical, hydraulic or pneumatic effect, often ignoring the knowledge of the terrain. It follows that when it goes well it was ass, when it goes wrong the fault lies with the middle.

For the sake of completeness, there are couple transfers dual power, ie mechanical on the main axis and electrical on the second. Certainly less bulky, but regarding weights, longevity, reliability, the theories are many and conflicting.

If you are passionate, play with it

I avoided abbreviations and technical references of integral systems by focusing on the differences for commercial use and on the standards shared in the FA.I will add valid advice given to me by an elderly bus driver who told me: "Before driving a new vehicle, play with it a bit to assimilate the reactions and function in safe spaces and, only afterwards, go and load". The concept is also valid for the increasingly numerous world of 4x4s and SUVs, where only by doing harmless “blank tests” is it possible to acquire the instinctive nature that is indispensable in the most dramatic stretches of road. In particular for SUVs, it is safe to bet that a large percentage of buyers let themselves be captured more by the words of the seller… “don't worry, it does everything by itself, etc.”… than by the type of system and operation of the vehicle.

Where to put the chains? Evaluation is needed

It is a bit of the litmus test of a lot of naivety that also revolves around engines. Without prejudice to the provisions of art. 122 paragraph 8 of the CdS which assimilates M + S - thermal - winter tires to snow chains, some owners of integral vehicles may have wondered where to apply snow chains if they do not have two pairs. 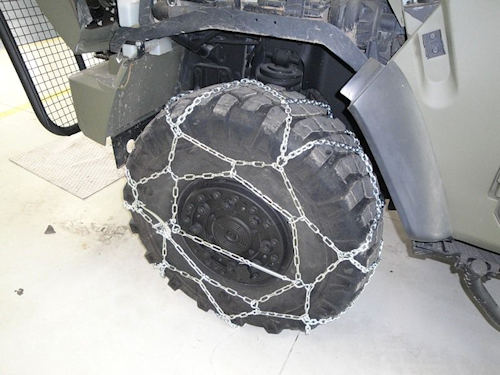 It depends on which trait you have to face. In fact, on mud, rock and obviously snow, the chains increase the grip unmatched by any type of MS rubber. The "rule" is to mount them on the driving wheels, but in the case of the integral ones having only one pair of chains available, it is good to favor the directionality by mounting them at the front. But beware, this is not the rule. In the absence of load, the mass of the car focuses more on the front axle where the engine is and therefore more grip. However, without "anchoring" the rear, even if equipped with ASR, there would be a risk of oscillations which are also accentuated by the lateral inclination of the road. So the choice to mount them at the front is valid at least as long as you don't have to climb snow-covered roads with an integral. In this case, traction is better guaranteed by improving the grip on the rear wheels, while the opposite is true when descending.

It is important to understand where we need to go and what load and set-up we have (caravan, luggage, etc.), and to move the chains from one axle to the other.

Speaking of "blank tests", the army also offers intensive courses every year off road on the tactical range, reproducing (during the day or in absolute darkness) the most drastic scenarios that can be found in out-of-area missions or civil protection disasters. insidious, however, the special knobby tires are assisted by the centralized pressure system (ACTL, VTLM LINCE, VTMM, SUPERAV / ACV) which increases the footprint of the tire and consequently the grip, without exposing the staff.

As previously written, among the supplies of armaments sent by the Italian government, there are also howitzers / ...
49949
Read

Apparently the Army of the Russian Federation is also bringing in the latest versions (dating back to the 80s ...
48396
Read

To circumvent the limitations imposed by Congress, the Biden Administration employs its allies to provide ...
18290
Read

No war can be interpreted and explained through the "absolute" and necessarily abstracting lenses of ...
4146
Read

If it weren't serious, it would even be comical. People don't realize the significance and implications that ...
17844
Read

Reuters reports that the United States will provide Ukrainians with long-range anti-ship missiles. If that were to ...
45329
Read

One of the modern fields of study related to learning is the one known as "serious games". Let's start right away ...
2380
Read

Last month we witnessed the sinking of one or more Ukrainian Neptune anti-ship missiles in the Black Sea ...
37212
Read

The Russian Airborne Forces (Vozdushno-Desantnye Voyska rossii - VDV) - like the vaunted Spetsnaz, by the way ...
29198
Read