Home Military world Libya: fighting is back. The real part ... 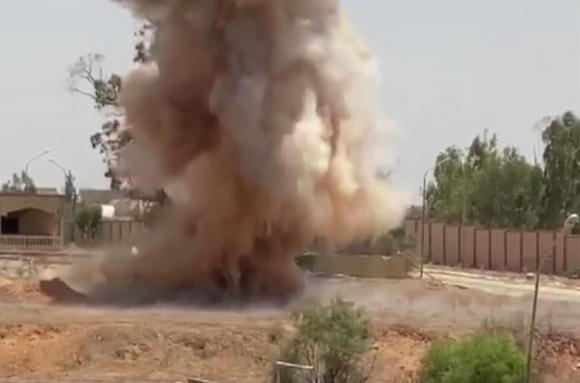 After a week of relative calm in Libya, fighting in the Sirte area resumed between the forces of the government of Tripoli and those of Tobruk. Haftar fighters attacked a Tripolino convoy in the Al-Shueiref area, a desert area southwest of Sirte. In addition, the Haftarian air force struck Sadada, east of Misrata, in an attempt to block the advance of loyal forces in Sarraj.

During the weekend, the spokesman for the Tripoline forces Mohamed Gununu had practically rejected any hypothesis of mediation advanced by various parties, branding them as "unacceptable" given the "presence of Russian, Syrian and African mercenaries" in Sirte. Haftar's complete abandonment of the last strip of Tripolitania is the conditio sine qua non the Tripoli executive - and with it Turkey - would be willing to open a new phase of talks but without dialoguing with the marshal of Libya or with the personalities most closely related to him. According to Gununu one cannot speak of cease-fire as long as the deposits and refining plants of the "oil crescent" are under the control of the "Libyan coup leaders" and the "war criminal" Haftar with the support of foreign powers such as Egypt, Russia and the United Arab Emirates.

While Tripoli continues its military and political-media offensive, Haftar appears to be increasingly in difficulty; two episodes have severely affected the image of the former strongman of Cyrenaica in recent days: the arrest by the Sudanese government of 122 people arrested on the border with Libya and hired by Tobruk as mercenaries and the investigation opened by the International Criminal Court after the discovery of 11 mass graves in Tarhuna, Tripolitania, to which must be added the accusation of ethnic cleansing brought against Haftar of the Tebu del Fezzan.

Haftar met with Benghazi Prime Minister Al-Thani and Foreign Minister Al-Hawij in Benghazi to devise a valid one exit strategy but without apparent noteworthy results, given the repetition of appeals to start a dialogue phase that do nothing but highlight how much the marshal's image has deteriorated and the difficulties which, after the defeats suffered, the composite block is facing which refers to Tobruk and Benghazi.

In this regard, the latest statements by the Egyptian president al-Sisi, one of the main sponsors of Tobruk, suggest precisely that Cairo is "becoming aware" of the political and military weakness of Haftar and Cyrenaica. Egypt has interests to defend, points to the partition of Libya and is sending messages to Ankara to find a negotiating solution by showing its military potential according to the canons of the "Qader 2020 maneuver".

In Libya a difficult match is being played for the control of oil wells and their reopening which, if in Tripolitania it has already taken place after the liberation of the territory, in Cyrenaica it is far from becoming since the blockade of the production and trade of black gold guarantees Haftar has a very strong blackmail potential and remains, to date, one of the few cards still in the hands of the marshal to currently guarantee his position and, for an ever closer tomorrow, a worthy severance pay. The president of the National Oil Company (NOC) Mustafa Sanalla has as its priority objective the reopening of the Cyrenaean wells closed since January 17 last year and which have led to an overall loss of 8 billion dollars for the Libyan coffers; not to mention that Sanalla is one of the main supporters of the arrival of foreign technicians in the country for the rehabilitation of oil pipelines sabotaged by Haftarian or mercenary militias in the pay of Tobruk during the conflict.

This particularly interesting news because highlights how a leading body for Libyan foreign and economic policy such as the NOC is more open to dialogue with other powers than the government of Tripoli, on which it depends, now flattened on Erdogan's positions. An opportunity to be exploited for those who will be able to seize the moment and above all will have the political will to do so, take note in Rome.

Neither the "simple" political solution proposed by Conte nor the demining work of the suburbs of Tripoli carried out by our engineers can act as active policies aimed at guaranteeing national interests in Libya. The oil question is the one to focus on resources - even military if necessary - for Italy.

After the suspension of the German KSK for pro-Nazi sympathies, it is the turn of the prestigious 22nd SAS regiment (Special ...
3899
Read