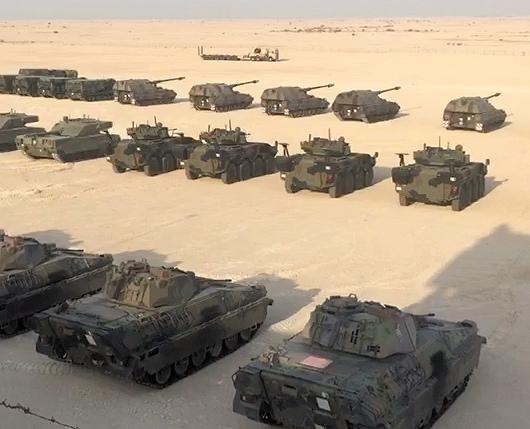 Last October, departments of the Italian Army conducted an exercise in Qatar, Nasr 2019. Among other activities, particular attention was paid to the use of guided artillery ammunition.

Indeed, the PzH-2000 self-propelled units of the 8th artillery regiment Pasubio of the heavy brigade Garibaldi, carried out the first operational experimentation shots (in the Al-Galail range), from a very long distance, with 155 mm VULCANO ammunition, designed by Leonardo at the La Spezia plants.

The name VULCANO indicates a series of decalibrated projectiles (in land with 155 mm shots and naval with 127 and 76 mm shots), having high ranges (which can vary from 50 to 80 km).

As far as terrestrial ammunition is concerned, the 155 mm shots include an unguided variant, called BER (Ballistic Exended Range); while two are the guided versions GLR (Guided Long Range): one with GPS only guide, 155 mm GLR / GPS; a GPS associated with a semi-active laser (SAL), 155 mm GLR / SAL.

During the exercise, the self-propelled vehicles of the Pasubio, have made a total of thirty shots with VULCANO BER bullets. While in November the last verification test was carried out for the type approval of 155 VULCANO GLR ammunition. During 2020, however, the first experimental shoots with the 155 VULCANO BER by the howitzers / cannon FH-70 from 155/39 mm should begin.

Given the decision to reintroduce the OTO howitzer mod. 56 of 105/14 mm (currently in force at the 1st mountain artillery regiment of the Alpine Brigade Taurinense), wouldn't it be appropriate to adopt 105 mm VULCANO guided ammunition, in order to increase its range (currently about 10.000 meters) and versatility of use?

The American military device, in recent years, is undergoing a profound restructuring in order to face ...
1423
Read

The fast multi-role vessel Project 02510 entered service on November 24 with the Baltic Fleet of the ...
1879
Read

The IRINI mission - launched last year by the European Union to support the UN embargo, aimed at blocking the ...
3347
Read

The hull of the icebreaker ship Evpatiy Kolovrat, the class leader of Project 21180M, was set up at Almaz ...
836
Read

Only 5 years ago the Turkish press was promoting the new ALTAY national battle tank as the most modern MBT in existence ...
3564
Read